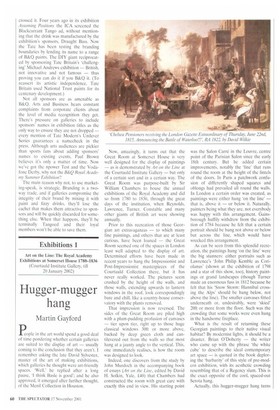 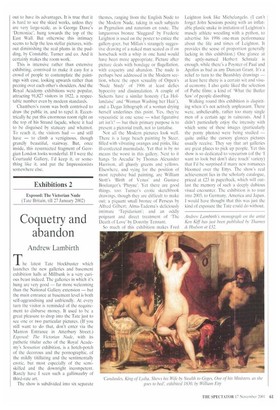 Art on the Line: The Royal Academy Exhibitions at Somerset House 1780-1836 (Courtauld Institute Gallery, till 20 January 2002)

Pcople in the art world spend a good deal of time pondering whether certain galleries are suited to the display of art — usually coming to the conclusion that they aren't. I remember asking the late David Sylvester, master of the art of making exhibitions, which galleries he thought were art-friendly spaces. 'Well,' he replied after a long pause, 'I think Basle is good'; and he also approved, it emerged after further thought, of the Menil Collection in Houston.

Now, amazingly, it turns out that the Great Room at Somerset House is very well designed for the display of paintings — as is demonstrated by Art on the Line at the Courtauld Institute Gallery — but only of a certain sort and in a certain way. The Great Room was purpose-built by Sir William Chambers to house the annual exhibitions of the Royal Academy and did so from 1780 to 1836, through the great days of the institution, when Reynolds. Lawrence, Turner, Constable and many other giants of British art were showing annually.

Prior to this recreation of those Georgian art extravaganzas — to which many fine paintings, and others that are at least curious, have been loaned — the Great Room seemed one of the spaces in London least well adapted to the display of art. Determined efforts have been made in recent years to hang the Impressionist and Post-Impressionist masterpieces of the Courtauld Collection there, but it has never really worked. The pictures seem crushed by the height of the walls, and those walls, extending upwards to lantern windows in the roof, look correspondingly bare and chill, like a country-house conservatory with the plants removed.

That impression is now reversed. The sides of the Great Room are piled high with a plum-pudding profusion of canvases — tier upon tier, right up to those huge classical windows 30ft or more above, backed by deep green cloth and cantilevered out from the walls so that most hang at a jaunty angle to the vertical. This, one immediately realises, is how the room was designed to look.

Indeed, one discovers from the study by John Murdoch in the accompanying book of essays (Art on the Line, edited by David H. Solkin, Yale, £40) that Chambers had constructed the room with great care with exactly this end in view. His starting point was the Salon Cane in the Louvre, centre point of the Parisian Salon since the early 18th century. But he added certain improvements, notably the line' that runs round the room at the height of the lintels of the doors. In Paris a patchwork confusion of differently shaped squares and oblongs had prevailed all round the walls. In London a certain order was created, as paintings were either hung 'on the line' — that is, above it — or below it. Naturally, painters being what they are, not everybody was happy with this arrangement. Gainsborough huffily withdrew from the exhibition of 1784 because he felt that a certain portrait should be hung not above or below but across the line, which would have wrecked this arrangement.

As can be seen from this splendid recreation, the paintings hung 'on the line' were the big stunners: either portraits such as Lawrence's 'John Philip Kemble as Coriolanus' (shown at the exhibition of 1798 and a star of this show, too), history paintings or grand landscapes (though Turner made an enormous fuss in 1812 because he felt that his 'Snow Storm: Hannibal crossing the Alps' should be hung below, not above the line). The smaller canvases fitted underneath or, undesirably, were 'skied' 20ft or more from the floor. Such was the crowding that some works were even hung in the handsome fireplace.

What is the result of returning these Georgian paintings to their native visual habitat? By modernist lights, it should be a disaster. Brian O'Doherty — the writer who came up with the phrase 'the white cube' to describe the ideal contemporary art space — is quoted in the book deploring the 'barbarity' of this style of pre-modern exhibition, with its aesthetic crowding resembling that of a Regency slum. This is the exact opposite of the cool, spaced-out Serota hang.

Actually, this hugger-mugger hang turns out to have its advantages. It is true that it is hard to see the skied works, unless they are very large-scale, as is George Dawe's 'Demoniac', hung towards the top of the East Wall. But otherwise this intimacy seems to help the less stellar pictures, without diminishing the real plums in the pudding, by Constable, Turner and co, And it certainly makes the room work.

This is intensive rather than extensive exhibiting, contrived to make it easy for a crowd of people to contemplate the paintings with ease, looking upwards rather than peering over each other's shoulders. And the Royal Academy exhibitions were popular, attracting 91,827 visitors in 1822, a respectable number even by modern standards.

Chambers's room was both contrived to draw the public in, and to repel it. Eccentrically he put this enormous room right on the top of his Strand facade, where it had to be disguised by statuary and whatnot. To reach it, the visitors had — and still have — to climb a vertiginous, though grandly beautiful, stairway. But, once inside, this resurrected fragment of Georgian London looks wonderful, If I were the Courtauld Gallery, I'd keep it, or something like it, and put the Impressionists somewhere else.