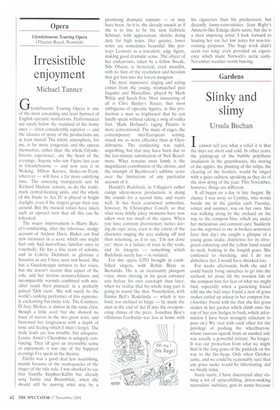 Glyndebourne Touring Opera is one of the most rewarding and least hymned of English operatic institutions. Performances are rarely below the standard of the home ones — often considerably superior — and the idiocies of many of the productions are at least muted. 'The whole atmosphere, for me, is far more congenial, and the operas themselves, rather than the whole Glyndebourne experience', are the heart of the evenings. Anyone who saw Figaro last year in Glyndebourne — and now sees it in Woking, Milton Keynes, Stoke-on-Trent, wherever — will have a far more satisfying time. The annoying transparent sets by Richard Hudson remain, as do the trademark central-heating units, and the whole of the finale to Act IV is played in bright daylight, even if the singers grope their way around. But the musical values have taken such an upward turn that all this can be tolerated.

The major improvement is Harry Bicket's conducting, after the laborious, stodgy account of Andrew Davis. Bicket can find new treasures in a score which one might feel only had marvellous, familiar ones to vouchsafe. He has a fine team of soloists, and in Colette Delahunt as glorious a Susanna as any I have seen and heard. She has a Guedenesque tartness to her voice, but she doesn't overdo that aspect of the role, and her tireless resourcefulness and incomparable warmth combined with mischief reach their pinnacle in a perfectly poised `Dell vieni'. She will surely be the world's ranking performer of this supremely enchanting but tricky role. The Countess, D'Arcy Bleiker, is almost in the same class, though a little cool; but she showed no trace of nerves in the two great arias, and bestowed her forgiveness with a depth of tone and feeling which I shan't forget. The male leads are less notable, but adequate. Louise Armit's Cherubino is uniquely convincing. They all gave an irresistible sense of enjoyment: it was one of the happiest evenings I've spent in the theatre.

Fidelio was a good deal less nourishing. mainly because of the inadequacies of the singer of the title role. I was shocked to see that Gunilla Stephen-Kallin has already sung Iso'de and Brunnhilde, when she should still be nursing what may be a promising dramatic soprano — or may have been. As it is, she already sounds as if she is in line to be the next Gabriele Schnaut, with approximate shrieks doing duty for high notes. Her quieter, lower notes are sometimes beautiful. She portrays Leonore as a truculent, edgy figure, making good dramatic sense. The object of her endeavours, taken by a fellow Swede, Nils Olsson, is hysterical, even maudlin, with no hint of the resolution and heroism that got him into the lowest dungeon.

The most impressive singing and acting comes from the young, mismatched pair Jaquino and Marzelline, played by Mark Wilde and Sarah Fox. Most interesting of all is Clive Bayley's Rocco, that most ambiguous of operatic figures, in this production a man so frightened that he can hardly speak without taking a swig of vodka first. Mark Holland's raging Pizarro is more conventional. The maze of cages, the contemporary mid-European setting, struck me as more effective than at Glyndebourne. The conducting was rapid, unprobing, but that may have been due to the last-minute substitution of Neil Beardmore. What remains most firmly is the magnificent contribution of the chorus, and the triumph of Beethoven's sublime score over the limitations of any particular account of it.

Handel's Rodelindu, in Villegier's rather campy silent-movie production, is doing the rounds for a second time, and wears well. It has been coarsened somewhat, however, by Christopher Cowell, so that what were mildly jokey moments have now taken over too much of the opera. When you have constant diversionary tactics during da cape arias, even to the extent of the character singing the aria stalking off and then returning, as if to say, 'I'm not done yet,' there is a failure of trust in the work, and its integrity — something which Rodelinda surely has — is violated.

For this opera GTO brought in established singers, with Robin Blaze as Bertarido. His is an incessantly plangent voice, more moving in his great entrance aria before his own cenotaph than later, when we realise that his whole long part is going to sound like that. Nonetheless, with Emma Bell's RodeEnda — which is too loud, too inclined to bulge — he made the duet at the end of Act II into the overpowering climax of the piece. Jonathan Best's villainous Garibaldo was less at home with his cigarettes than his predecessor, but decently funny-cum-sinister. Jean Rigby's Amneris-like Eduige skirts satire, but she is a most imposing artist; I look forward to hearing her use her low notes for non-terrorising purposes. The huge work didn't seem too long; even provided an experience which made Norwich's arctic earlyNovember weather worth braving.