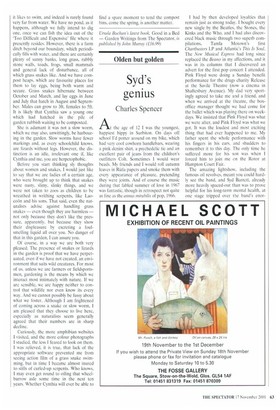 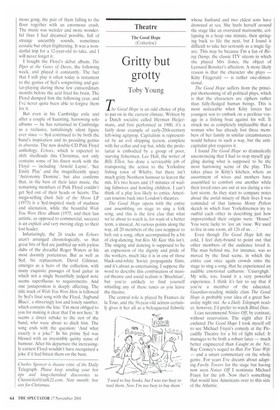 At the age of 12 I was the youngest, happiest hippy in Surbiton. On days off school I'd potter around on my bike, which had very cool cowhorn handlebars, wearing a pink denim shirt, a psychedelic tie and an excellent pair of jeans from the children's outfitters Colt. Sometimes I would wear beads. 1Vly friends and I would roll autumn leaves in Rizla papers and smoke them with every appearance of pleasure, pretending they were joints. And of course the music during that fabled summer of love in 1967 was fantastic, though in retrospect not quite as fine as the annus mirabilis of pop. 1966.

I had by then developed loyalties that remain just as strong today. I bought every new single by the Beatles, the Stones, the Kinks and the Who, and I had also discovered black music through two superb com pilations, Tamla Motown's first Charthusters LP and Atlantic's This Is Soul. The New Musical Express had long since replaced the Beano in my affections, and it was in its columns that I discovered an advert for the first pop concert I attended. Pink Floyd were doing a Sunday benefit performance for the drugs charity Release at the Savile Theatre (now a cinema in Shaftesbury Avenue). My dad very sportingly agreed to take me and a friend, and when we arrived at the theatre, the boxoffice manager thought we had come for the ballet which was playing there on weekdays. We insisted that Pink Floyd was what we were after, and Pink Floyd was what we got. It was the loudest and most exciting thing that had ever happened to me. My father spent the whole performance with his fingers in his ears. and shudders to remember it to this day. The only time he suffered more for his son was when I forced him to join me on the Rotor at Hampton Court Fair.

The amazing lightshow, including the famous oil revolves, meant you could hardly see the band, and Syd Barrett, already more heavily spaced-out than was to prove helpful for his long-term mental health, at one stage tripped over the band's enor mous gong, the pair of them falling to the floor together with an enormous crash. The music was weirder and more wonderful than I had dreamed possible, full of strange unearthly sounds, sometimes ecstatic but often frightening. It was a wonderful trip for a 12-year-old to take, and I will never forget it.

I bought the Floyd's debut album. The Piper at the Gates of Dawn, the following week, and played it constantly. The fact that I still play it often today is testament to the genius of Syd's songwriting and guitar-playing during those few extraordinary months before the acid fried his brain. The Floyd dumped him the following year, and I've never quite been able to forgive them for it.

But even in his Cambridge exile and after a couple of haunting, harrowing solo albums — he has remained in Cambridge as a reclusive, tantalisingly silent figure ever since — Syd continued to be both the band's inspiration and its presiding genius in absentia. The new double-CD Pink Floyd anthology, Echoes, which is expected to shift shedloads this Christmas, not only contains some of his finest work with the Floyd — including 'Arnold Layne'. 'See Emily Play' and the magnificently spacy 'Astronomy Domine', but also confirms that, in the best of their later music, the remaining members of Pink Floyd couldn't get Syd out of their heads or hearts. The mega-selling Dark Side of the Moon LP (1973) is a Syd-inspired study of madness and alienation, while the beautiful Wish You Were Here album (1975, and their last artistic, as opposed to commercial, success) is an explicit and very moving elegy to their lost leader.

Infuriatingly, the 26 tracks on Echoes aren't arranged chronologically, so that great bits of Syd are jumbled up with joyless slabs of the dreadful Roger Waters at his most doomily portentous. But as well as Syd, his replacement, David Gilmour, emerges as a hero of the collection, with many exquisite passages of lead guitar in which not a single beautifully judged note seems superfluous to requirements. And one juxtaposition is deeply affecting. The title track of Wish You Were Here is followed by Syd's final song with the Floyd, `Jugband Blues', a shiveringly lost and lonely number, which contains the line: 'I'm most obliged to you for making it clear that I'm not here.' It seems a direct rebuke to the rest of the band, who were about to ditch him. The song ends with the question: 'And what exactly is a joke?' In his prime Syd was blessed with an irresistibly quirky sense of humour. After his departure the increasingly earnest Floyd wouldn't have recognised a joke if it had bitten them on the bum.

Charles Spencer is theatre critic of the Daily Telegraph. Please keep sending your hot tips and long-cherished discoveries to Chasnicked@talk21.com. Next month: box sets for Christmas.