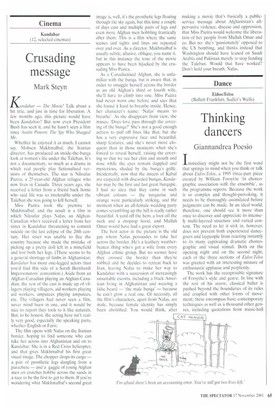 Kandahar — The Movie! Talk about a hit title, and just in time for liberation. A few months ago, this picture would have been Kandahoo? But now even President Bush has seen it, and he hasn't seen a film since Austin Powers: The Spy Who Shagged Me.

Whether he enjoyed it as much. I cannot say. Mohsen Makhmalbaf, the Iranian director, has produced an inside-the-burqa look at women's life under the Taleban. It's not a documentary, so much as a drama in which real people play fictionalised versions of themselves, The star is Niloufar Pazira, a 25-year-old Afghan refugee who now lives in Canada. Three years ago, she received a letter from a friend back home who said life was so intolerable under the Taleban she was going to kill herself.

Miss Pazira took the premise to Makhmalbaf, and the result is a film in which Niloufar plays Nafas, an AfghanCanadian who's received a letter from her sister in Kandahar threatening to commit suicide on the last eclipse of the 20th century. Her sister was unable to flee the country because she made the mistake of picking up a pretty doll left in a minefield and lost both her legs. (There seems to be a general shortage of limbs in Afghanistan: Kandahar has more one-legged actors than you'd find this side of a Sarah Bernhardt Impersonators convention.) Aside from an Afghan-Canadian playing an Afghan-Canadian, the rest of the cast is made up of villagers playing villagers, aid workers playing aid workers, amputees playing amputees, etc. The villagers had never seen a film, never mind been in one, and it would be nice to report they took to it like naturals. But. to be honest, the acting here isn't really very good, especially the speaking parts, whether English or Farsi.

The film opens with Nafas on the Iranian border. hoping to find someone who can take her across into Afghanistan and on to Kandahar. She is in a Red Cross helicopter, and that gives Makhmalbaf his first great visual image. The chopper drops its cargo — a pair of prosthetic legs dangling from a parachute — and a gaggle of young Afghan men on crutches hobble across the sands in a race to be the first to get to them. If you're wondering what Makhmalbaf s second great image is, well, it's the prosthetic legs floating through the sky again, but this time a couple of days east and multiple pairs of legs and even more Afghan men hobbling frantically after them. This is a film where the same scenes and sights and lines are repeated over and over. As a director, Makhmalbaf is usually subtle, allusive, oblique, you name it, but in this instance the tone of the movie appears to have been hijacked by the crusading Miss Pazira.

As a Canadianised Afghan, she is unfamiliar with the burqa, but is aware that, in order to smuggle herself across the border as an old Afghan's third or fourth wife, she'll have to climb into one. Miss Pazira had never worn one before and says that she found it hard to breathe inside. Hence, her character's name: 'Nafas' means 'to breathe'. As she disappears from view, she muses, 'Does love pass through the covering of the burqa?' She's not a good enough actress to pull off lines like that, but she has a very expressive face and beautiful, sharp features, and she's never more eloquent than in those moments when she's forced to reveal herself, raising the covering so that we see her chin and mouth and nose while the eyes remain dappled and mysterious, shaded by the burqa's

Incidentally, now that the streets of Kabul are carpeted with discarded burwas, Kandahar may he the first and last great burqapic. I had no idea that they came in such vibrant colours — the turquoise and orange were particularly striking, and the moment when an all-female wedding party comes scrambling up the hill is really rather beautiful. A yard off the hem, a foot off the neck and a droptop hood, and Mullah Omar would have had a great export.

The best actor in the picture is the old guy whom Nafas persuades to take her across the border. He's a leathery weatherbeaten thing who's got a wife from every Afghan ethnic group. But no sooner have they crossed the border than they're robbed and he decides to retreat back to Iran, leaving Nabs to make her way to Kandahar with a succession of increasingly unsuitable escorts, including a black American living in Afghanistan and wearing a false beard — the male burqa' — because he can't grow a real one. Of necessity, all the film's characters, apart from Nafas, are male, because female identity has simply been abolished. You would think, after making a movie that's basically a publicservice message about Afghanistan's allpervasive violence, disease and oppression, that Miss Pazira would welcome the liberation of her people from Mullah Omar and co. But no: she's 'passionately' opposed to the US bombing, and thinks instead that Washington should have leaned on Saudi Arabia and Pakistan merely to stop funding the Taleban. Would that have worked? Don't hold your breath, Nafas.