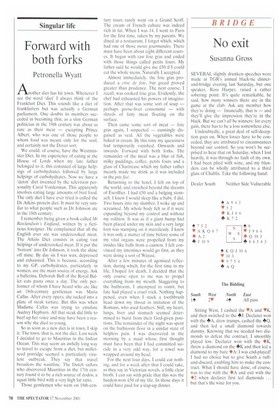 Forward with both forks

Another diet has hit town. Whenever I see the word 'diet' I always think of the Frankfurt Diet. This sounds like a diet of frankfurters but was actually a German parliament. One doubts its members sueceded in becoming thin, as a slim German politician in the 19th century was about as rare as their meat — excepting Prince Albert, who was one of those people to whom food was meant only for the soul, and certainly not the Dover sort.

We could, of course, have the Westminster Diet. In my experience of eating at the House of Lords when my late father belonged to it, this consisted of large helpings of carbohydrates followed by large helpings of carbohydrates. Now we have a `detox' diet invented by the television personality Carol Vorderman. This apparently involves eating large amounts of bird food. The only diet I have ever tried is called the Dr Atkins protein diet. It must be very similar to what people such as Dr Johnson ate in the 18th century.

I remember being given a book called Mr Rowlandson's England, written by a fictitious foreigner. He complained that all the English ever ate was undercooked meat. The Atkins Diet consists in eating vast helpings of undercooked meat. If it put the 'bottom' into Dr Johnson, it took the shine off mine. By day six I was wan, depressed and exhausted. This is because, according to my GP, carbohydrates, particularly in women, are the main source of energy. Ask a ballerina. Deborah Bull of the Royal Ballet eats pasta once a day. The only performer of whom I have heard who ate like an 18th-century gentleman was Maria Callas. After every opera, she tucked into a plate of steak tartare. But this was when Madame Callas was trying to emulate Audrey Hepburn. All that steak did little to beef up her voice and may have been a reason why she died so young.

So as soon as a new diet is in town, I skip it. The town, that is, not the diet. Last week I decided to go to Mauritius in the Indian Ocean. This may seem an awfully long way to travel to escape from a diet, but milletseed porridge seemed a particularly virulent outbreak. They say that travel broadens the waistline. The Dutch sailors who discovered Mauritius in the 17th century found it to be a rich source of dodos, a squat little bird with a very high fat ratio.

Those gentlemen who went on 18th-cen tury tours rarely went on a Grand Scoff. The cream of French culture was indeed rich in fat. When I was 14. I went to Paris for the first time. taken by my parents. We dined at a restaurant, I forget which, which had one of those menu gourmancles. There must have been about eight different courses. It began with raw foie gras and ended with those things called petits fours. My father said he would give me £50 if I could eat the whole menu. Naturally I accepted.

Almost immediately, the foie gras produced a crise de foie, but greed proved greater than prudence. The next course, I recall, was cooked foie gras. Evidently, the chef had exhausted his powers of imagination. After that was some sort of soup — perhaps goose-liver consommé — with shreds of fatty meat floating on the surface.

Then came some sort of meat foie gras again, I suspected — cunningly disguised as veal. All the vegetables were baked in cream. By this time my queasiness had temporarily vanished. Onwards and inwards. Forward with both forks. The remainder of the meal was a blur of fish, milky puddings, coffee, petits fours and a glass of Chartreuse which my father rather meanly made me drink as it was included in the mix fire.

Returning to the hotel. I felt on top of the world, and enriched beyond the dreams of Escoffier. I had £50 and a bulging stomach. I knew I would sleep like a baby. I did. Two hours into my slumber, I woke up and screamed. My whole body felt as if it were expanding beyond my control and without my volition. It was as if a giant bump had been placed under my skin and a very large foot was stamping on it mercilessly. I knew it was only a matter of time before some of my vital organs were propelled from my insides like balls from a cannon. I felt convinced my intestines would go first, as they were doing a sort of Watusi.

After a few minutes of agonised reflection, during which, for the first time in my life, I hoped for death, I decided that the only course open to me was to propel everything from my mouth. Staggering to the bathroom, I attempted to vomit, but fate had played a cruel trick. Nothing happened, even when I stuck a toothbrush head down my throat in imitation of the Romans. who used feathers. Still, my heart, lungs, liver and stomach seemed determined to burst from their God-given positions. The remainder of the night was spent on the bathroom floor in a similar state of helpless pain. I was discovered in the morning by a maid whose first thought must have been that I had committed suicide in a very odd way, for a towel was wrapped around my head.

For the next four days, I could eat nothing, and for a week after that I could take, as they say in Victorian novels, a little clear broth. I can say with pride that this was the hardest-won £50 of my life. In those days it could have paid for a slap-up dinner.