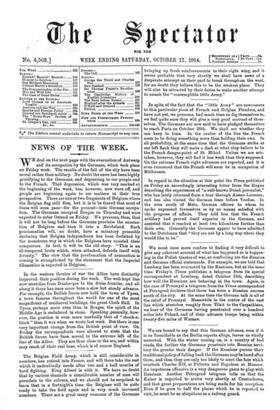 NvE deal on the next page with the evacuation of Antwerp and its occupation by the Germans, which took place ou Friday week. The results of the fall of the city have been moral rather than military. No doubt the news has been highly gratifying to the Germans, and depressing to our people and to the French. That depression, which was very marked at the beginning of the week, has, however, now worn off, and people are beginning again to see matters in their true perspective. There are one or two fragments of Belgium where the Belgian flag still flies, but it is to be feared that most of these will soon pass—for the present—into German occupa- tion. The Germans occupied Bruges on Thursday and were expected to enter Ostend on Friday. We presume, then, that it will not be long before the Germans proclaim the annexa- tion of Belgium and turn it into a Beichsland. Such proclamation will, no doubt, have a minatory preamble declaring that Belgian independence has been forfeited by the monstrous way in which the Belgians have resisted their conquerors. In fact, it will be the old story. " This is an ill-tempered brute which, when attacked, defends itself with ferocity." The view that the proclamation of annexation is coming is strengthened by the statement that the Imperial Chancellor is expected in Belgium.