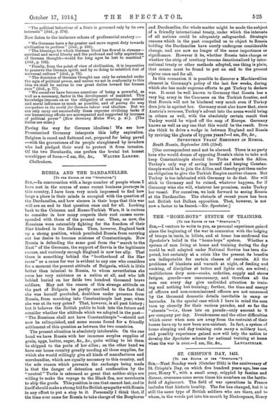 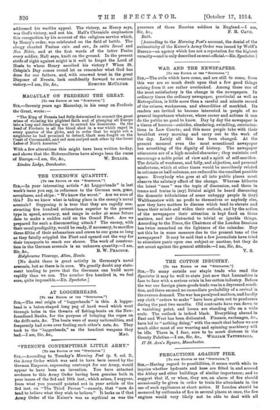 [To Tlia EDITOR OF THE "SPFCTATOL.n

SIR,—Next Sunday week (October 25th) is the anniversary of St. Crispin's Day, on which five hundred years ago, lees one year, Henry V., with a small army, crippled by famine and disease, overcame some seven times his numbers on the battle- field of Agincourt. The field of war operations in France includes that historic locality. The foe has changed, but it is still the same type of British soldiers who are there, and to whom, in the words put into his mouth by Shakespeare, Henry addressed his warlike appeal. The victory, as Henry says, was God's victory, and not his. Hall's Chronicle emphasizes this recognition by his account of the religious service which, by Henry's order, was celebrated on the field of battle. The clergy chanted Psalms cxiv. and cxv., In ezitu Israel and Non Nobis, and at the first words of the latter Psalm every soldier, Hall says, knelt on the ground. In the present strife of right against might is it well to forget the Lord of Hosts to whom Henry ascribed his victory P When St. Crispin's Day comes round let us remember what God has done for our fathers, and, with renewed trust in the great Disposer of Events, look confidently forward to eventual