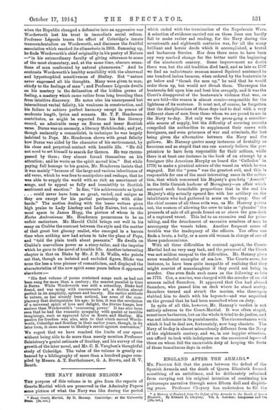 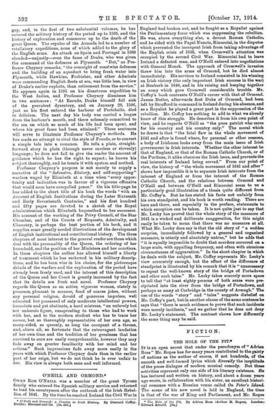 ENGLAND AFTER THE ARMADA"

Mn. FROUDE felt that the years between the defeat of the Spanish Armada and the death of Queen Elizabeth formed something of an anticlimax, and he deliberately refrained from carrying out his original intention of continuing his picturesque narrative through some fifteen dull and dispirit. ing years. Professor Cheyney has undertaken to fill the • A History of England from the Defeat of the Armada to the Death of Qae.a Elizabeth. By Edward P. Cheyney. Vol. I. London: Longman and Co. [its, net.]

gap, and, in the first of two substantial volumes, he has covered the military history of the period up to 1595, and the history of exploration and commerce up to the death of the great Queen. The repulse of the Armada led to a number of retaliatory expeditions, none of which added to the glory of the English arms. An attack on Spain and Portugal in 1589 clouded—unjustly—even the fame of Drake, who was given the command of the defences at Plymouth. "But," as Pro- fessor Cheyney remarks, " the oversight of coastwise defences and the building of an aqueduct to bring fresh water into Plymouth, while Hawkins, Frobisher, and other Admirals were commanding English fleets at sea, was little less, in view of Drake's earlier exploits, than retirement from the service." He appears again in 1595 on his disastrous expedition to the West Indies, and Professor Cheyney dismisses him in two sentences : "At Escudo, Drake himself fell sick of the prevalent dysentery, and on January 28, 1596, just as his fleet entered the harbour of Portobello, died in delirium. The next day his body was carried a league from the harbour's mouth, and there solemnly committed to the sea on which so much of his life had been spent, and where his great fame had been attained." These sentences will serve to illustrate Professor Cheyney's methods. He has made no attempt to rival the style of Froude, or to convert a simple tale into a romance. He tells a plain, straight- forward story in plain (through never careless or slovenly) language ; he does not fail to give the reader the amount of guidance which he has the right to expect; he knows his subject thoroughly, and he treats it with system and method.

Professor Cheyney's purpose is not merely to supply a narrative of the " defensive, dilatory, and self-supporting" warfare waged by Elizabeth at a time when "every oppor- tunity and indication was in favour of a vigorous offensive that would soon have compelled peace." On his title-page he has added to the short title of his book the words "with an Account of English Institutions during the Later Sixteenth and Early Seventeenth Centuries," and his first hundred and fifty pages are devoted to a sketch of the Royal administration which Elizabeth bequeathed to her successor. His account of the working of the Privy Council, of the Star Chamber, and of the Courts of Requests, Admiralty, and Chancery, is perhaps the best portion of his book, and it supplies some greatly needed illustrations of the development of English institutional and constitutional history. The three chapters of most interest to the general reader are those which deal with the personality of the Queen, the ordering of her household, and the position of her Ministers and her courtiers. In these chapters the author has allowed himself a liberty of treatment which he has eschewed in his military descrip- tions, and he has been wise in his choice, for the picturesque details of the warfare and the exploration of the period have already been freely used, and the interest of this description of the Queen and her Court is greatly increased by the fact that its details are fresh and novel. Professor Cheyney regards the Queen as an active, vigorous woman, stately in presence, pleasant in manner, fond of coarse jokes, without any personal religion, devoid of generous impulses, well educated but possessed of only moderate intellectual powers, irresolute and yet obstinate, a hard mistress, "an unlovely but not unheroic figure, exasperating to those who had to work -with her, and to the modern student who has to trace her career, but so thoroughly representative of her own age, so many-sided, so queenly, so long the occupant of a throne, and, above all, so fortunate that the extravagant laudation of her own time and the tradition of her greatness that has survived to ours are easily comprehensible, however they may fade away on greater familiarity with her mind and her actions." Such impressions fade away more easily in the years with which Professor Cheyney deals than in the earlier part of her reign, but we do not think he is ever unfair to her. His view is always both sane and well informed.