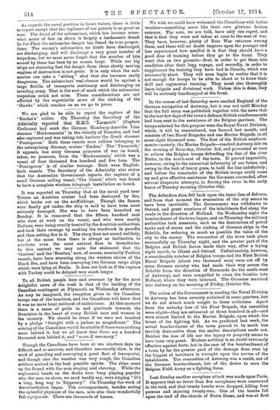 The defenders then fell back upon the inner line of

defence, and from that moment the evacuation of the city seems to have been inevitable. The Government was withdrawn to Ostend, and great numbers of the inhabitants fled along the roads in the direction of Holland. On Wednesday night the bombardment of the town began, and on Thursday the military authorities took measures, such as the destruction of petrol tanks and of stores and the sinking of German ships in the Schelde, for reducing as much as possible the value of the city to the enemy. The evacuation of the town took place successfully on Thursday night, and the greater part of the Belgian and British forces made their way, after a trying night march, to Ghent and Ostend. Unfortunately, however, a considerable number of Belgian troops and the First British Naval Brigade (about two thousand men) were cut off by some German cavalry who had made their way across the Schelde from the direction of Termonde (to the south-west of Antwerp), and were compelled to cross the frontier into Holland, where they were interned. The Germans marched into Antwerp on the morning of Friday, October 9th.