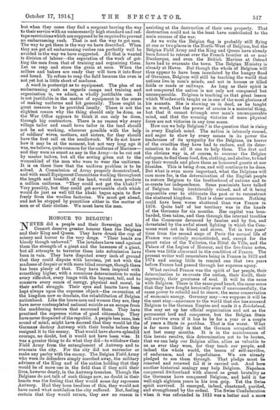 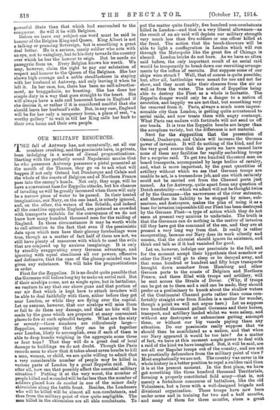 HONOUR TO BELGIUM ! N EVER did a people and their

Sovereign and his Consort deserve greater honour than the Belgians and their King and Queen. They have drunk the cup of misery and horror to the very dregs. "Their heads are bloody though unbowed." The invaders have used against them the strength of a giant and the baseness of a giant, but all attempts to terrorize them into submission have been in vain. They have disputed every inch of ground that they could dispute with heroism, yet not with the madness of despair or with mere blind courage, though there has been plenty of that. They have been inspired with something higher, with a conscious determination to make every rifle-shot, every lunge with the bayonet, tell, and to conserve • every ounce of energy, physical and moral, in their awful struggle. Their eyes and hearts have been kept always upon the supreme object—the re-creation of the kingdom now so desolate, the rehabilitation of Belgian nationhood. Like the brave men and women they are, they have never contemplated national suicide as an escape from the maddening terrors that surround them. They have practised the supreme virtue of good citizenship. They have never despaired of the republic. A people less sane, less sound of mind, might have decreed that they would let the Germane destroy Antwerp with their bombs before they resigned it to the enemy. That would have shown splendid courage, no doubt, but it would not have been wise. It was a greater thing to do what they did—to withdraw their Field Army from the entanglement of Antwerp and to evacuate the city. For the city did not surrender or make any parley with the enemy. The Belgian Field Army who were its defenders simply marched away, the military advisers of the King and of the nation holding that they would be of more use in the field than if they sold their lives, however dearly, in the Antwerp trenches. Though the Belgians do not talk of such things now, no doubt in their hearts was the feeling that they would some day repossess Antwerp. Had they been heedless of this, they would not have cared what mutilation the city suffered. But, feeling certain that they would return, they saw no reason in assisting at the destruction of their own property. That destruction could not in the least have contributed to the main success of the war.

As we write the Belgian flag is probably still flying at one or two places in the North-West of Belgium, but the Belgian Field Army and the King and Queen have already been forced to retreat over the French frontier at or near Dunkerque, and even the British Marines at Ostend have had to evacuate the town. The Belgian Ministry is already at Havre. But though the whole of Belgium will thus appear to have been inundated by the hungry flood of Germans, Belgium will still be teaching the world that nations live in men's minds, and not in houses or tilled fields or roads or railways. As long as their spirit is not conquered the nation is not only not conquered but unconquerable. Belgium is teaching us that great lesson which Wordsworth taught us in one of the most glorious of his sonnets. She is showing us in deed, as he taught us in word, that the power of armies is a material thing, but that it cannot triumph over man's unconquerable mind, and that the seeming victories of mere physical force are not victories in any true sense. How can we help Belgium ? is the question that is rising in every English mind. The nation is intensely roused, and eager to show by every means in its power the tenderness of its sympathy for the Belgians, its horror of the cruelties they have had to endure, and its deter- mination to do all it can to help them. The first and the obvious way is, of course, to succour the Belgian refugees, to find them food, fire, clothing, and shelter, to bind up their wounds and place them as honoured guests at our firesides. This is being done, and will continue to be done. But what is even more important, what the Belgians will care more for, is the determination of the English people to restore Belgium to the brotherhood of nations and to re-create her independence. Some pessimists have talked of Belgium being irretrievably ruined, and of it being impossible ever to obliterate the past or to reconstruct the shattered kingdom. That is sheer nonsense. Nothing could have been worse shattered than was France in 1870. Quite half of her territory was in the hands of the Germans for six months. Her capital was bom- barded, then taken, and then through the internal troubles of the Commune devoured by famine and by fire, and devastated by the awful street fighting in which the Com- mune went out in blood and storm. Yet in two years time from the second siege of Paris the normal life of France was entirely reconstituted, and, except for the gaunt ruins of the Tuileries, the Hotel de Ville, and the Palace of the Legion:of Honour, and the five-franc notes, there was little abnormal in the condition of France. The present writer well remembers being in France in 1873 and 1874 and seeing little to remind one that two years before France had passed through her supreme agony.

What revived France was the spirit of her people, their determination to re-create the nation, their thrift, their ingenuity, their greatness of soul. It will be the same with Belgium. There is the same good heart, the same sense that they have fought heroically even if unsuccessfully, the same power to rebuild and to renew, the same conservation of economic energy. Germany may—we suppose it will be the next step—announce to the world that she has annexed Belgium to the German Empire and made it a Reichsland. She may set up her official organization and act as the permanent lord and conqueror, but the Belgian State will survive even if it has to be for a year or a couple of years a State in partibue. That is the worst. What is far more likely is that the German occupation will not last many months. It is in the maintenance of this heroic resolve, this determination not to be beaten, that we can help our Belgian allies, allies as valuable to us as ever they were, for they teach our people, and indeed the whole world, the lesson of self-sacrifice, of endurance, and of hopefulness. We are already pledged to see them through. That pledge must be renewed and renewed ti i it is carried out. And here another historical analogy may help Belgium. Napoleon conquered Switzerland with almost as great brutality as the Germans have conquered Belgium, and held it for well-nigh eighteen years in his iron grip. Yet the Swiss spirit survived. It emerged, indeed, chastened, purified, and strengthened by the ordeal. The Swiss Confederation when it was refounded. in 1815 was a better and a more powerful State than that which had succumbed to the conqueror. So will it be with Belgium. Before we leave our subject one word must be said in honour of the Belgian King and Queen. King Albert is not a talking or prancing Sovereign, but is something a great deal better. He is a serious, manly soldier who acts with an eye, not to vainglory, but to his duty towards the country over which he has the honour to reign. But he needs no panegyric from us. Every Belgian knows his worth. We may, however, claim the right to pay our salutation of respect and honour to the Queen of the Belgians. She has shown high courage and a noble steadfastness in staying with her husband at Antwerp, and only leaving it when he left it. In her case, too, there has been no self-advertise- ment, no braggadocio, no boasting. She has done her simple duty in a way that goes straight to the heart. She will always have a safe and honoured home in England if she desires it, or rather if it is considered needful that she should leave her husband's side. But, in any case, England will be for her only a temporary home, a place of rest, "a worthy gallery" to wait in till her King calls her back to their own home and their own people.