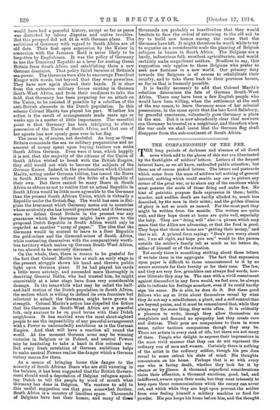 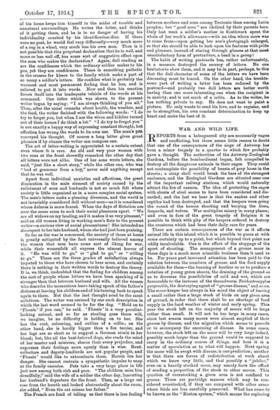 THE COMPANIONSHIP OF THE PEN.

THE long periods of darkness and absence of all direct news which add to the gloom of this war are illuminated by the flashlights of soldiers' letters. Letters of the deepest interest have, as we all know, enthralled public attention; but these are of course picked letters. The letters and postcards which come from the mass of soldiers tell nothing of general interest, nothing which could enable any one to picture any corner of the great war, or to share any of the emotions which must possess the souls of those firing and under fire. No hint of patriotic purpose finds expression in them; battle, murder, and sudden death are hardly alluded to, much less described, by the men in their midst; and the golden illusion of glory is not so much as named. For the most part they might be written from the seaside. The writers are quite well, and they hope those at home are quite well, especially the baby. They are " doing well " also—a phrase which may mean that the Allies are advancing, or that the food is good. They hope that those at home are " getting their money," and that is all. A printed form saying : " Don't you worry about me; I am all right, and hope you are," would to the person outside the soldier's family tell as much as his letters do, either of himself or of the situation.

Yet surely there is something striking about these letters if we take them in the aggregate. The fact that expression upon paper is difficult to those unaccustomed to it by no means accounts for their brevity or for their tone. The few, and they are very few, grumblers can always find words, how- ever illiterate they may be. The man with a vivid resentment against discomfort in any form would, we feel sure, be always able to indicate his feelings somehow, even if be could hardly sign his name. He is able, he does do it. But these good fellows who say so little about themselves reveal by what they do not say a mindfulness, a pluck, and a self-control that are beyond praise, and it must be remembered that, while they always say the same thing, they write often. It is evidently a pleasure to write, though they allow themselves no complaints and demand no sympathy lest they create care and distress. Their pens are companions to them in some sense, rather taciturn companions though they may be. There are artists in every rank of life, but there are not many of them. People who delight to express their impressions in the most vivid manner that they can do not represent the ordinary run of men and women. Certainly there is nothing of the artist in the ordinary soldier, though his pen does reveal to some extent his state of mind. His thoughts concentrate on his home. Perhaps that is so with every one who is facing death, whether they look for it by chance or by illness. A thousand superficial considerations claim their aifention, a thousand emotions, good, bad, and indifferent, swarm upon their souls, but they want intensely to keep open those communications which the enemy can never cut, and which while they are kept open prevent the soldier from ever feeling himself a military machine or food for powder. His pen keeps his home before him, and the thought of his home keeps him himself in the midst of trouble and unnatural surroundings. He writes the letter, and thinks of it getting there, and be is in no danger of having his individuality crushed by his identification-disc. If there were no post, he would feel very differently—very much more of a cog in a wheel, very much less his own man. Then is it not possible that this perpetual declaration that he is well, and more or less well off, has some sort of suggestive effect upon the man who makes the declaration? Again, dull reading as are the confidences which the ordinary soldier makes to his pen, yet they are confidences. There is something pathetic in the crosses for kisses to the family which make a part of so many a soldier's letters. He confides what is probably the warmest and most permanent feeling that he has, and is relieved to put it into words. Now and then his emotion forces itself into the inadequate vehicle of the words at his command. One letter which was shown to the present writer began by saying: "I am always thinking of you all." Then, after the usual remarks about health, the weather, and the food, the writer finished with the following words: "I do try to forget you, but when I see the wives and kiddies turned out of their homes I do think a lot." "I do try to forget you " is not exactly a happy way of expressing constant thought, but affection has wrung the words to its own use. The man's pen conveyed his thought. Of course a long letter gives great pleasure if by chance the writer can compose one.

The art of letter-writing is appreciated to a certain extent even where it is rare. An old and very poor woman with two sons at the front shrewdly remarked the other day that all letters were not alike. One of her sons wrote letters, she said, "just like a short story," while the other one, who was "bad at grammar from a boy," never said anything except that he was well.

Apart from individual anxieties and affections, the great diminution in the male element of society caused by the enlistment of sons and husbands is not so much felt where society is little organized as in a more complex social system. The men's letters make a pleasing diversion, and the world is not invariably considered dull without men—as it is considered where dulness is more feared. When the days of flirtation are over the sexes seem to seek their social pleasures apart. " We are all widows on my landing, and it makes it so very pleasant," said an old woman living in working-men's flats to the present writer—a curious view of social pleasantness ! She intended no disrespect to her late husband, whom she had just been praising.

So far as the war is concerned, the anxiety of those at home is greatly mitigated by the fact universally believed among the women that men have some sort of liking for war, while their womenfolk all express the utmost horror of it. "He was wild to go," or " glad to go," or " willing to go." These are the three grades of satisfaction always imputed to those who have chosen to bear arms, and certainly there is nothing in their written words to destroy the theory. It is, we think, undoubted that the feeling for children among the sort of people whose letters we have been speaking of is stronger than that between husband and wife. All the women who describe the momentous leave-taking speak of the father's distress at leaving his children and of his turning back to speak again to them. Not that the last thought need be the most solicitous. The writer was amused by one such description in which the last word seemed to be for the dog. " Hold on to 'Flossie' if you can," he said. 'Flossie' is a very peculiar- looking animal, and so far as stealing goes there will, we imagine, be no difficulty in holding on to her. She has the coat, colouring, and outline of a collie; on the other hand, she is hardly bigger than a fox terrier, and her legs are so short as to suggest a German strain in her blood; but, like all the best-beloved dogs, she reads the mind of her master and mistress, shares their every prejudice, and expresses their feelings more openly than is wise. Rent- collectors and deputy-landlords are not popular people, and 'Flossie' would like to exterminate them. Herein lies her danger. She cannot restrain a sympathetic impulse to snap at the family enemies. Pets take a very large place in life just now among both rich and poor. "The children miss him dreadfully," said the wife of a soldier the other day, lamenting her husband's departure for the front. Then, as a large cat rose from the hearth and looked abstractedly about the room, she added, " Even the cat misses her father."

The French are fond of telling us that there is less feeling between mothers and sons among Teutonic than among Latin peoples ; but " good sons " are idolized by their parents here. Only last week a soldier's mother in Southwark spent the whole of her week's allowance—with no idea where more was to come from—upon getting her son's photograph enlarged, so that she should be able to look upon his features with pride and pleasure, instead of staring through glasses at that most unsatisfactory form of portraiture, a head in a group !

The habit of writing postcards has, rather unfortunately, in a measure destroyed the secrecy of letters. No one hesitates to show them, and it may be in part, perhaps, to this that the dull character of some of the letters we have been discussing must be traced. On the other hand, the trouble- some part of writing a letter has been reduced by the postcard—and probably two dull letters are better worth having than one more interesting one when the recipient is in anxiety, and is not much of a critic. As to the writer, he has nothing private to say. He does not want to paint a picture. He only wants to send his love, and to register, and so to strengthen, his own constant determination to keep up heart and make the best of it.