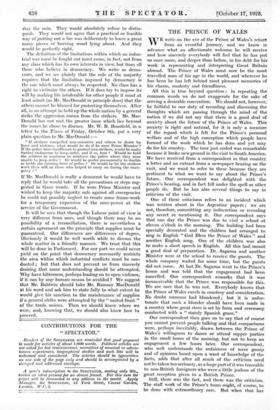 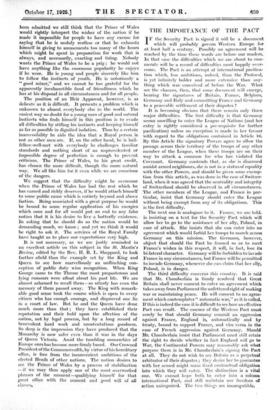 THE PRINCE OF WALES

WE write on the eve of the Prince of Wales's return from an eventful journey, and we know in advance what an affectionate welcome he will receive and how sincerely everybody will feel that he has put us once more, and deeper than before, in his debt for his work in representing and interpreting Great Britain abroad. The Prince of Wales must now be the most travelled man of his age in the world, and wherever he has been he has left behind most pleasant memories of his charm, modesty and friendliness.

All this is true beyond question ; in repeating the common words we do not exaggerate for the sake of serving a desirable convention. We should not, however,' be faithful to our duty of recording and discussing the thoughts which are passing through the mind of the nation if we did not say that there is a goOd deal of anxiety about the future of the Prince of Wales. This anxiety is right and natural, for it is only a measure' of the regard which is felt for the Prince's personal welfare and of the high conception which people have formed of the work which he has done and yet may do for his country. The tour just ended was remarkable because it broke new ground in the visit to South America. We have received from a correspondent in that country, a letter and an extract from a newspaper bearing on the visit, and we want to refer to these because they are pertinent to what we want to say about the Prince's future. Our correspondent was delighted with the Prince's bearing, and in fact fell under the_spell as other people do. But he has also several things to say in criticism of the visit.

One of these criticisms refers to an incident which was written about in the Argentine papers ; we are not, therefore, committing any indiscretion or revealing any secret in -mentioning it. Our correspondent says that one day the Prince was due to visit a school at eleven o'clock in the morning. The building had been specially decorated and the children had arranged to sing in English " God Bless the Prince of Wales " and another English song. One of the children was also to make a short speech in English. All this had meant' a good deal of preparation. Dr. Sagarna and another. Minister were at the school to receive the guests. The whole company waited for some time, but the guests did not come. At last Dr. Sagarna went to the Prince's house and was told that the engagement had been cancelled. Our correspondent remarks that it was inconceivable that the Prince was responsible for this. We are sure that he was not. Everybody knows that the Prince of Wales excels in courtesy and. consideration. No doubt someone had blundered ; but it is unfor- tunate that such a blunder should have been made in a country where great store is set by form and ceremony conducted with a " stately Spanish grace."

Our correspondent then goes on to say that of course you cannot prevent people talking and that comparisons were, perhaps inevitably, drawn between the Prince of Wales's willingness to dance or attend supper parties in the small hours of the morning, but not to keep an engagement a few hours later. Our correspondent, who well understands the unfairness of mere gossip and of opinions based upon a want of knowledge of the facts, adds that after all much of the criticism need not be taken too seriously, as a large part of it was traceable to non-British foreigners who were a little jealous of the great reception given to a British Prince.

Still, there was the fact, and there was the criticism. The staff work of the Prince's tours ought, of course, to be done with extraordinary care. But when that has been admitted we still think that the Prince of Wales would rightly interpret the wishes of the nation if he made it impossible for people to have any excuse for saying that he is unduly restless or that he exhausts himself in giving to amusements too many of the hours which might be spent in preparation for work that is always, and necessarily, exacting and tiring. Nobody -wants the Prince of Wales to be a prig ; he would not have anything like the enormous popularity he enjoys if he were. He is young and people sincerely like him to follow the instincts of youth. He is notoriously a " good mixer," and we cannot be too grateful for the apparently inexhaustible fund of friendliness which he has at his disposal in all circumstances and for all people. The position of an Heir Apparent, however, is as delicate as it is difficult. It presents a problem which is unknown to almost everybody else in the world. The easiest way no doubt for a young man of good and natural instincts who finds himself in this position is to evade all difficulties by stifling his instincts and keeping himself as far as possible in dignified isolation. Thus by a certain inaccessibility he aids the idea that 'a Royal person is not as other men are. If, on the other hand, he is hail- fellow-well-met with everybody he challenges familiar standards and nothing short of an unprecedented or impossible degree of perfection is enough to prevent criticism. The Prince of Wales, to his great credit, has chosen the more difficult, though the more natural way. We all like him for it even while we are conscious of the dangers. We suggest that the difficulty might be overcome when the Prince of Wales has had the rest which he has earned and richly deserves, if he would attach himself to some public cause which is entirely beyond and above faction. Being associated with a great purpose he would be bound to some regular application of his energies which once and for all would put an end to any false notion that it is his desire to live a butterfly existence. In asking that he should do so the nation would be demanding much, we know ; and yet we think it would be right to ask it. The services of the Royal Family have taught us to place our expectations very high. It is not necessary, as we are justly reminded in an excellent article on this subject 'in the St. Marlin's Review, edited by the Rev. H. R. L. Sheppard, to look farther afield than the example set by the King and Queen to see how marvellously an unflinching con- ception of public duty wins recognition. When King George came to the Throne the most preposterous and lying rumours were afloat about his past life. We are almost ashamed to recall them—so utterly has even the memory of them passed away. The King with remark- able good sense took the course which is open to every citizen who has enough courage, and disproved one lie in a court of law. But he and the Queen have done much more than that ; they have established their reputation and their hold upon the affection of the nation, not by legal process, but by a long record of benevolent hard work and 'unostentatious goodness. So deep is the impression they have produced that the Monarchy is now safer even than it was in the days of Queen Victoria. Amid the tumbling monarchies of Europe ours has become more firmly based. Our Crowned President of the Commonwealth, by virtue of his hereditary office, is free from the inconvenient ambitions of the elected Heads of other nations. The nation desires to see the Prince of Wales by a process of stabilization —if we may thus apply one of the most overworked phrases of the momentqualifying himself for that great office with the consent and good will of all classes,