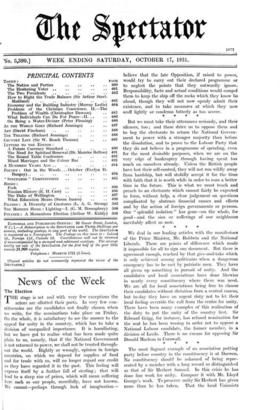 The Election THE stage is set and with very few exceptions the actors are allotted their parts. In very few con- stituencies are the candidates not finally chosen when we write, for the nominations take place on Friday. On the whole, it is satisfactory to see the answer to the appeal for unity in the country, which has to take a decision of unequalled importance. It is humiliating, but we have got to realize what has been made quite plain to us, namely, that if the National Government is not returned to power, we shall not be trusted through. out the world. Rightly or wrongly, opinion in foreign countries, on which we depend for supplies of food and for trade with us, will no longer regard our credit as they have regarded it in the past. This feeling will express itself by a further fall of sterling ; that will lead to a steep rise of prices, which will mean suffering here such as our people, mercifully, have not known. We cannot—perhaps through lack of imagination— believe that the late Opposition, if raised to power, would try to carry out their declared programme or to neglect the points that they outwardly ignore. Responsibility, facts and actual conditions would compel them to keep the ship off the rocks which they know lie ahead, though they will not now openly admit their existence, and to take measures at which they now scoff lightly or condemn bitterly as too severe.