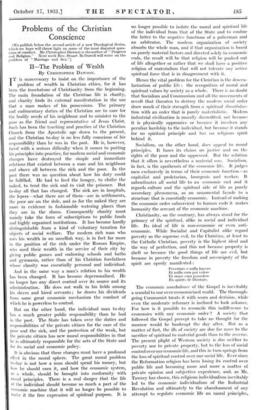 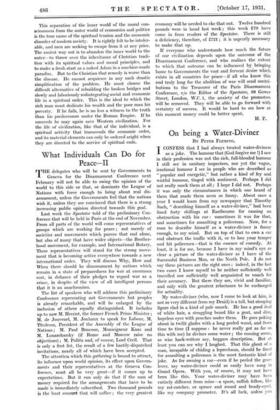 I We publish below the second article of a new Theological Series, which we hope will throw light on some of the Most disputed ques- tions of conduct. Mr. Christopher Dawson is the author of " Progress and Religion." Neat week Rev. Stuart McDowell will write on the problem of " Marriage and Sex."]

By CHRISTOPHER DAWSON. TT is unnecessary to insist on the importance of the problem of wealth in Christian ethics, for it has been the touchstone of Christianity from the beginning. The main foundation of the Christian life is charity, and charity finds its external, manifestation in the use that a man makes of his possessions. The primary and rudimentary duties. of the Christian are to care for the bodily needs of his neighbour and to minister to the poor as the friend and representative of Jesus Christ. Such has been the teaching and practice of the Christian Church from the Apostolic . age down to the present, and the Christian to-day is no less fully conscious of his responsibility than he was in the past. He is, however, faced with a serious difficulty when it conies to putting his principles into practice, for modern social and economic changes have destroyed the simple and immediate relations that existed between a man and his neighbour and above all between the rich and the poor. In the past there was no question about how his duty could be fulfilled. He had to feed the hungry, to clothe the naked, to tend the sick and to visit the prisoner. But to-day all that has changed. The sick are in hospitals, the lepers—what there are of them—are in settlements, the poor arc on the dole, and as for the naked they are more in evidence in fashionable watering places than they are in the slums. Consequently charity must mainly take the form of subscriptions to public funds and highly organized institutions. It has become hardly distinguishable from a kind of voluntary taxation for objects of social welfare. The modern rich man who uses his wealth in an unselfish way, is in fact far more in the position of the rich under the Roman Empire, who used their wealth in the service of their city by giving public games and endowing schools and baths and gymnasia, rather than of his Christian forefathers whose charity was essentially personal and individual.

And in the same way a man's relation to his wealth has been. changed. It has become depersonalized. He no longer has any direct control over its source and its administration. He does not walk in his fields among his slaves and hired servants ; he draws his dividends from some great economic mechanism the conduct of which he is powerless to control.

It is obvious that these changes must have a profound effect in the moral sphere. The great moral problem to-day is not how a man should spend his money, but how he should earn it, and how the economic system, as a whole, should be brought into conformity with moral principles. There is a real danger that the life of the individual should become so much a part of the economic machine that it will no longer be possible to make it the free expression of spiritual purpose. It is no longer possible to isolate the moral and spiritual life of the individual from that of the State and to confine the latter to the negative functions of a policeman and an arbitrator. The modern organization of society absorbs the whole man, and if that organization is based on purely material factors and directed solely to economic ends, the result will :be that religion will be pushed out of life altogether or rather that we shall have a positive religion of materialism that will not tolerate any active spiritual force that is in disagreement with it. .

Hence the vital problem for the Christian is.the desecu- larization of public life : the recognition of moral and spiritual values by society as a whole. There is no doubt that Socialism and Communism and all the movements of revolt that threaten to destroy the modern social order draw much of their strength from a spiritual dissatisfac- tion with an order that is purely materialistic. Modern industrial civilization is morally discredited, not because it in physically oppressive or because it involves any peculiar hardship to the individual, but because it stands for no spiritual principle and has no religious spirit behind it.

Socialism, on the other hand, does appeal to moral principles. It bases its claims on justice and on the rights of the poor and the oppressed. But the solution that it offers is nevertheless a material one. Socialism, in fact, is the apotheosis of the economic life. It judges men exclusively in terms of their economic function—as capitalist and proletarian, bourgeois and worker. It subordinates all social life to an economic end and it regards culture and the spiritual side of life as purely secondary phenomena, as an ornamental facade to a structure that is essentially economic. Instead of making the economic order subservient to human ends it makes humanity the servant of the economic machine.

Christianity, on the contrary, has always stood for the primacy of the spiritual, alike in social and individual life. Its ideal of life is non-economic or even anti- economic. While Socialist and Capitalist alike regard poverty as the supreme evil, to the Christian, at least to the Catholic Christian, poverty is the highest ideal and the way of perfection, and this not because property is theft or because the good things of life are evil, but because in poverty the freedom and sovereignty of the spirit are openly manifested :

The economic nonchalance of the Gospel is inevitably a scandal to our over-econornicized world. The thorough- going Communist treats it with scorn and derision, while even the moderate reformer is inclined to look askance. For how is it possible to reconcile this indifference to economics with any economic order ? A society that followed the Gospel precept to take no thought for the morrow would be bankrupt the day after. But as a matter of fact, the ills of society arc due far more to the sacrifice of spiritual to material goods than to the reverse. The present plight of Western society is due neither to poverty nor to private property, but to the loss of social control over our economic life, and this in turn springs from the loss of spiritual control over our social life. Ever since the Reformation religion has been losing its control over public life and becoming more and more a matter of private opinion and subjective experience, and, as Mr. Tawney has shown, this religious individualism inevitably led to the economic individualism of the Industrial Revolution and ultimately to the abandonment of any attempt to regulate economic life on moral principles. This separation of the inner world of the moral con- sciousness from the outer world of economics and politics is the true cause of the spiritual tension and the economic disorder of modern society. It is rightly felt to be intoler- able, and men are seeking to escape from it at any price. The easiest way out is to abandon the inner world to the outer—to throw over the inheritance of Christian tradi- tion with its spiritual values and moral principles, and to make a fresh start as a naked Adam in a machine-made paradise. But to the Christian that remedy is worse than the disease. He cannot acquiesce in any such drastic simplification of the problem. He must choose the difficult alternative of rebuilding the broken bridges and slowly and laboriously redintegrating social and economic life in a spiritual order. This is the ideal to which the rich man must dedicate his wealth and the poor man his poverty. If he fails, he is no less a witness to the truth than his predecessors under the Roman Empire. If he succeeds he may again save Western civilization. For the life of civilization, like that of the individual, is a spiritual activity that transcends the economic order, and its material elements can only be ordered aright when they are directed to the service of spiritual ends.