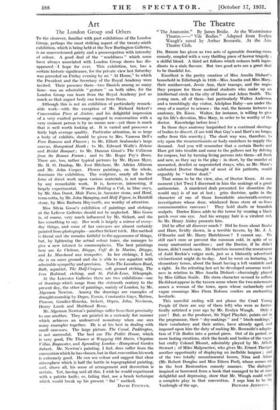 The London Group and Others

To the observer, familiar with past exhibitions of the London Group, perhaps the most striking aspect of the twenty-ninth exhibition, which is being held at the New Burlington Galleries, is an unaccustomed gaiety and a preoccupation with intensity of colour. A good deal of the " muddiness " which some have always associated with London Group shows has dis- appeared—I hope for ever. This exhibition, too, has a certain historic significance, for the private view last Saturday was preceded on Friday evening by an " At Home," to which the President and the Secretary of the Royal Academy were invited. Their presence there—two Daniels among so many, lions—was an admirable " gesture " on both sides, for the London Group can learn from the Royal Academy just as much as that august body can learn from them.

Although this is not an exhibition of particularly remark- able work—with the exception of Mr. Richard Sickert's Conversation Piece at Aintree, and his delightful impression of a very exalted personage engaged in conversation with a very eminent person is by no means new—yet there is much that is well worth looking at. It is varied and possesses a fairly high average quality. Particular attention, in so large a body of exhibits, should be given to Mrs. Vanessa Bell's Foro Romano and Flowers ; to Mr. Elliott Seabrooke's large canvas, Hampstead Heath ; to Mr. Edward Wolfe's Heloisc and Bridal Bouquet ; to Mr. Duncan Grant's The Coliseum from the Roman Forum ; and to Mr. Roger Fry's Roses. There are, too, rather typical pictures by Mr. Hyam Myer, Mr. R. 0. Dunlop, Mr. Ivor Hitchens, Mr. Adrian Allinson and Mr. John Cooper. Flower paintings, on the whole, dominate the exhibition. The sculpture, nearly all in the form of direct work upon various materials, is not marked by any remarkable work. It is, however, interesting, if largely experimental. Woman Holding a Cub, in blue onyx, by Mr. Alan Durst, Male Torso, in Ancaster stone, and Hcad, terra-cotta, by Mr. John Skeaping, and Half Figure, in Hainhill stone, by Miss Barbara Hey worth, are worthy of attention.

Miss Silvia Gosse's exhibition of paintings and etchings at the Lefevre Galleries should not be neglected. Miss Gosse is, of course, very much influenced by Mr. Sickert, and she has something to say. Her work is largely a mirror of every- day things, and some of her canvases are almost certainly painted from photographs—another Sickert trick. Her method is literal and she remains faithful to the appearance of things, but, by lightening the actual colour tones, she manages to give a new interest to commonplaces. The best paintings here are Le Chdtcau, Dieppe, Café de la Marine, Dieppe, and Le Marchand aux tronipettes. In her etchings, I feel, she is on surer ground and she is able to use aquatint with admirable sympathy and precision. Note The Lansdown Road, Bath, aquatint, The Half-Coupon, soft ground etching, The Iron Bedstead, etching, and St. Pol-de-Leon, lithograph.

At the Leicester Galleries there are two exhibitions—one of drawings which range from the sixteenth century to the present day, the other of paintings, mainly of London, by Mr. Algernon Newton. Among the drawings are examples of draughtsmanship by Degas, Forain, Constantin Guys, Matisse, Picasso, Gaudier-Brzeska, Siekert, Orpen, John, Ncvinson, Henry Lamb and Muirhead Bone.

Mr. Algernon Newton's paintings suffer from their proximity to one another. They are painted in a curiously flat manner which achieves an undeserved monotony when one sees many examples together. He is at his best in dealing with small canvases. The large picture, The Canal, Paddington, is not successful. The best are The Public House, which is very good, The Thames at Wapping Old Stairs, Chepstow Villas, Bayswater, and Spreading London—Hampstead Garden Suburb. Mr. Newton's painting, I feel, does suffer from the convention which he has chosen, but in that convention his work is extremely good. He can use colour and suggest that clear atmosphere which is half the battle in topographical painting, and, above all, his sense of arrangement and decoration is certain. Yet, having said all this, I wish he would experiment with a palette knife; or, failing that, use a brush technique which would break up his present flat " method.