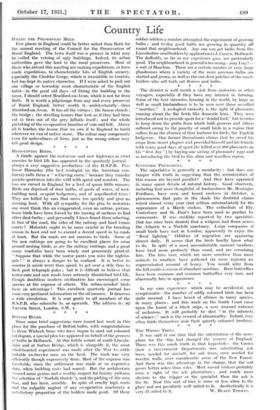 Page 13, 17 October 1931 — In my own experience—which may be accidental, not symptomatic—the number
Close

In my own experience—which may be accidental, not symptomatic—the number

of oddly coloured birds has been quite unusual. I have heard of albinos in many species, in many places ; and this week on the South Coast came upon the haunt of a black snipe, a very unusual extreme of melanism. It will probably be shot " in the interests of science ;" such is the reward of abnormality. Indeed, very