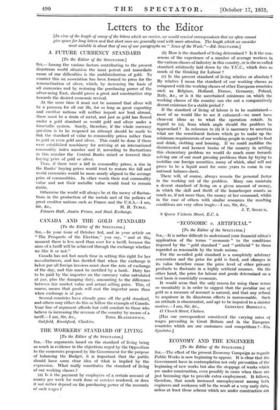 THE WORKERS' STANDARD OF LIVING

[To the Editor of the SPECTATOR.] SIR,—The arguments based on the standard of living being so much in evidence in the objections urged by the Opposition to the economies proposed by the Government for the purpose of balancing the Budget, it is important that the public should have some clear idea of what is implied by the expression. What really constitutes the standard of living of our working classes ?

(a) Is it the payment by employers of a certain amount of money per week for work done or services rendered, or does it not rather depend on the purchasing power of the amounts of such wages ? (b) How is the standard of living determined ? Is it the con- sensus of the experience of a number of average workers in the various classes of industry in this country, or is the so-called standard arbitrarily laid down by the T.U.C., which does so much of the thinking for Labour ?

(c) Is the present standard of living relative or absolute ?

If the standard of living of labour is to be maintained— most of us would like to see it enhanced—we must have clear-cut ideas as to what the operation entails. In regard to (a), from which angle should the problem be approached ? In reference to (b) it is necessary to ascertain what are the constituent factors which go to make up the minimum requirements of our working people in regard to food and drink, clothing and housing. If we could mobilize the disinterested and keenest brains of the country in settling this elementary problem we would do much more towards solving one of our most pressing problems than by trying to mobilize our foreign securities, many of which, alas! will not prove to be a liquid aceat for some years to come in our national balance-sheet.

There will, of course, always remain the personal factor in the working out of the problem. Many can maintain a decent standard of living on a given amount of money, in which the skill and thrift of the housekeeper counts as much as, if not more than, the money at her command, whilst in the case of others with similar resources the resulting conditions are very often tragic.—I am, Sir, &c.,