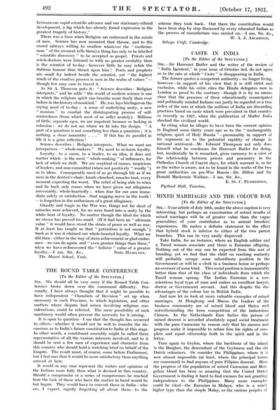 [To the Editor of the SPECTATOR.] Sni,—Sir Harcourt Butler and the writer of the review of " India Insistent," in your issue of October 3rd, do not agree as to the rate at which " Caste " is disappearing in India.

The former quotes a competent authority—no longer living, however—in support of his view that it is still strict and exclusive, while his critic cites the Hindu delegates now in London as proof to the contrary—though it is by no means clear that the presence of these educationally emancipated and politically minded Indians can justly be regarded as a true index of the rate at which the millions of India are discarding practices based on caste which were prevalent in that country so recently as 1927, when the publication of Mother India shocked the civilized world.

In citing what he alleges to have been the current opinion in England some thirty years ago as to the unchangeably religious spirit of Holy Russia "—presumably in support of his argument as to the potential rapidity of change in national sentiment—Mr. Edward Thompson not only does himself what he condemns Sir Harcourt Butler for doing, but, incidentally be it remarked, gives currency to a view of the relationship between priests and peasantry in the Orthodox Church of Czarist days, for which warrant is, so far as the writer is aware, not to be found in the works of the two great authorities on pre-War Russia—Dr. Dillon and Sir Donald Mackenzie Wallace.— I am, Sir, &c.,