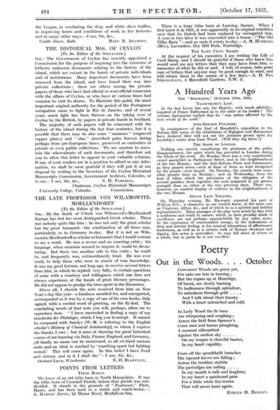 THE HISTORICAL MSS. OF CEYLON • [To the Editor of

the SPECTATOR.] Sin,—The Government of Ceylon has recently appointed .a Commission for the purpose of inquiring into the existence of hitherto unknown documents relating to the history of .the island, which are extant in the hands of private individuals and of institutions. Many important documents have been removed from the island, and have found their way into private collections ; there are others among the private papers of those who have had official or semi-official connexion with the affairs of Ceylon, or who have at various times had occasion to visit its shores. To illustrate this point, the most important original authority for the period of the Portuguese occupation came to light in Rio de Janeiro, and of recent years much light has been thrown on the taking over of Ceylon by the British, by papers in private hands in Scotland.

The majority of such papers will be concerned with the history of the island during the last four centuries, but it is possible that there may be also some saimases " (engraved copper plates) and " olas " (inscribed palm leaves) dating perhaps from pre-European times, preserved as curiosities in private or even public collections. We are anxious to ascer- tain the whereabouts of such documents, and therefore ask you to allow this letter to appear in your valuable columns. If any of your readers are in a position to afford us any infor- mation, we shall be most grateful if they will put it at our disposal by writing to the Secretary of the Ceylon Historical Manuscripts Commission, Government Archives, Colombo, or