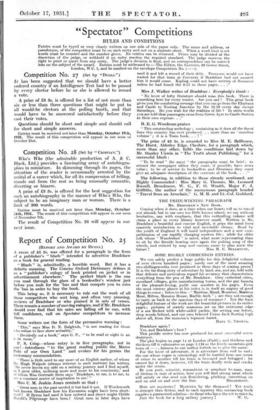 RULES AND CONDITIONS Entries must be typed or very clearly written qn one side of the paper only. The name and address, or pseudonym, of the competitor must be on each entry and not on a separate sheet. When a word limit is set words must be counted and the number given. No entries can be returned. Prizes may be divided at the discretion of the judge, or withheld if no entry reaches the required standard. The judge reserves the right to print or quote from any entry. The judge's decision is final, and no correspondence can be entered into on the subject of the award. Entries must be addressed to :—The Editor, the Spectator, 99 Gower Street, London,W.C. 1, and be marked on the envelope Competition No. (—).

Competition No. 27 (Set by "Dum.t.") IT has been suggested that we should have a better ordered country if an Intelligence Test had to be passed by every elector before he or she is allowed to record a vote.

A prize of E3 3s. is offered for a list of not more than six or less than three questions that might be put to all would-be electors at the polling booth, and that would have to be answered satisfactorily before they cast their votes.

Entries must be received not later than Monday, October I9th, 1931. The result of this competition will appear in our issue ei October 31st. '

Competition No. 28 (Set by " CRISPIAN.") Who's Who (the admirable production of A. & C. Black, -Ltd.) provides a fascinating array of autobiogra- phies in miniature. In skimming. through its pages, the attention of the reader is occasionally arrested by the recital of a career which, for all its compression of telling, stands out from the rest as being unusually romantic, diverting or bizarre.

A prize, of £3 3s. is offered for the best suggestion for such an autobiography in the manner of Who's Who, the subject to be an imaginary man or woman. There is a limit of 300 words.

Entries must be received not later than Monday, October :6th, 1931. The result of this competition will appear in our issue of November 7th.

The result of Competition No. 26 will appear in our next issue.

Report of Competition No. 25

(REPORT AND AWARD BY DUGLI.)

A PRIZE of SS 3s. was offered for a paragraph in the form of a publisher's " blurb " intended to 'advertise Bradshaw as a book for general reading.

" Blurb " is, admittedly, a horrible word. But it has a definite meaning. The Concise Oxford Dictionary defines it as a " publisher's eulogy of book printed on jacket or in advertisement elsewhere." • The perfect blurb is the one you read through the glass of a bookseller's window just before you rush for the 'bus and that compels you to miss the 'bus in order to buy the book.

This being so, it is necessary to rule out the work of all

those competitors who sent long, and often very amusing, reviews of Bradshaw or who praised it in sets of verses. There remain a number of moving-eulogies, and if Mr. Bradshaw should ever find -that his sales are falling off he can, with full confidence, call on Spectator competitors to increase t hem.

Some writers use the form 'of the persuasive warning :

" This," says Miss D. N. Dalgleish, " is not reading for those ho refuse to face sheer actuality."

" Decidedly not a book," says G. P., " to be read at night in an it -lit room." - P. S. Crisp—whose entry is in five paragraphs, not in one !—introduces " to the great reading public the Marco Polo of our Own Land " and evokes for his genius the customary commendation. " There is little need to say more of an English author, of whom Mr. Hugh Walpole (always reticent in such matters) has written ' He never leaves my side on a railway journey and I find myself, as I grow older, inclining more and more to his concinnity,' and of whom Miss Gertrude Stein says ` Bradshaw, to me, is to me, to no a constant source of inspiration to me.' " Miss C. M. Jenkin Jones reminds us that : " Great men in the past needed it but had it not. If Wordsworth had known Bradshaw bow. his Excursion. might have been short- ened ! If Byron had used it how ordered and direct might Childs Harold's Pilgrimage have been ! Great men in later days have

used it and left a record of their debt. Tennyson would not have waited for that train at Coventry if Bradshaw had not assured him it would come. Kipling could not have written of Romance unless he had found the 9.15 in these pages. . . ."

Miss J. Walker writes of Bradshaw : Everybody's Guide : • " No lover of lofty literature should miss. this book. There is something here for every reader. Are you sad ? This great hook gives you the comforting message that you can go from the Elephant and Castle to Tooting Junction by the 12.19 every day except Saturdays. Do you. wish for the realities of life ? In stern words you are told that passengers cross from Green Ayre to Castle Station at their own expense. . .

" This outstanding anthology;, as it does all the finest lines this country has ever prouced. . . more than an omnibus volume' ; it is a Train book. . . ! "

- The prize of £3 3s. is awarded to Miss M. E. Bellhouse, The Hurst, Alderley Edge, Cheshire, for a paragraph which, more than any other, fulfils the conditions laid down by Mr. Stanley Unwin in " The Truth about Publishing," for a successful blurb :

" To be read " (he says) " the paragraphs must be brief ; to attract the newspaper editor they must, if possible, have news value ; to be of service to booksellers and librarians they must give an adequate description of the contents of the book. . . ."

Coming when it does, at a time when our hearts tell us to travel not abroad, but in our own too little known island, we say without hesitation, nay with emphasis, that this enthralling volume will claim a place in every library however small. Written in Mr: Bradshaw's beautiful and concise English, it grips the mind from masterly introduction to vital and inevitable climax. Read by the youth of England it will instil independence and a new com prehension of our rapidly changing modern life ; while for older folk whose " Wanderlust" is sated, what more rejuvenating than to sit by the fireside hearing once again the pulsing song of the wheels, and enticed by map and curious name to plan anew the future ! Miss M. E. BELLHOUSE.

We can safely predict a large public for this delightful volume of over eleven hundred pages ; surely one of the most amazing two-shillingsworths ever produced in these days of soaring prices 1 It is the far-flung story of adventure by land, sea, and air, told with that delicate and meticulous regard for accuracy that characterizes everything from the pen of Mr. Bradshaw. Grey cathedral cities, moorland villages, grim manufacturing towns, and the gay haunts of the pleasure-loving, jostle one another in his pages. Even the most etirriory glance at his index is in itself an augury of good things to come ; listen to this—" Maidens, Maud, Montrose, Marston Moor, Milton, Mansion House, Marble Arch " ; are they not enough

to us back to the spacious days of romance ? Not the least delightful feature of the work are the beautiful pictures in its earlier pages ; pictures of stately mansions set on the extrernest edge of a sea flecked with white-sailed yachts, the setting sun before, deep woods behind, and our own beloved Union Jack floating high above all, from the mansion's topmost turret.

This prolific writer has now produced his most successful nerve destroyer.

The plot begins on page IA at London (Padd.), and thickens anc1 thickens till it culminates on page 1,134 at the lovely mountain-girt town of —, fairness to our author forbids us to give the name.

For the lover of adventure, it is adventure from end to end : the one whose vogue is criminology will be hurtled from one scene of crime to another till his brain is bemused and befogged : he cannot lay it down, however, till the brain finally reels and cracks under the strain.

Be you poet, scientist, romanticist or armchair he-man, man of dreams or man of action, here you will find strong meat which will satisfy or else send you floundering, pitching, curvetting on

Here are mysteries ! Mysteries by the thousand Yet truth is stranger than fiction, and to each mystery this entrancing book supplies a guaranteed solution—to those who have the wit to trace its