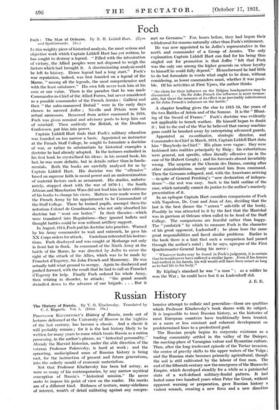 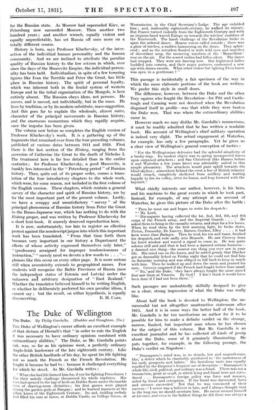 The History of Russia. By V. 0. Kluchevsky. Translated by C. J. Hogarth. Vol. 5. (Dent. les.) PROFESSOR KLITCREVSKVS History of Russia, made out of lectures delivered at the University of Moscow in the 'eighties of the last century, has become a classic. And a classic it will probably remain ; for it is the last history likely to be written for many years to come which treats Russia as a nation possessing, in the author's phrase, an " historical personality." Already the Marxist historian, under the able direction of the veteran Professor Pokrovsky, is hard at work ; and the sprawling, undisciplined mass of Russian history is being cast, for the instruction of present and future generations, into the orderly mould of economic materialism.

Not that Professor Kluchevsky has been led astray, as were so many of his contemporaries, by any narrow mystical conception of Russia's " historical mission." He never seeks to impose his point of view on the reader. His merits are of a different kind. Richness of texture, many-sidedness of interest, wealth of detail militating against any compre-

hensive attempt to collate and generalize—these are qualities which Professor Kluchevsky's book shares with its subject. It is impossible to treat Russian history, as the histories of most European countries have traditionally been treated, as a more or less constant and coherent development on predetermined lines to a predestined goal.

The Russian people begins its corporate existence as a trading community settled in the valley of the Dnieper, the meeting-place of Varangian valour and Byzantine culture. Then, after the long irrelevant episode of the Tartar invasion, the centre of gravity shifts to the upper waters of the Volga ; and the Russian state becomes primarily agricultural, though the soil is still cultivated by the labour of free men. The end of the fifteenth century saw the emergence of the Muscovite Empire, which developed steadily for a while as a patriarchal state of a well-defined military-feudal pattern. It had lasted some two hundred years when Peter the Great, without apparent warning or preparation, gave Russian history a violent wrench, creating a new form and a new direction for the Russian state. As Moscow had superseded Kiev, so Petersburg now succeeded Moscow. Then another two hundred years ; and another wrench, equally violent and equally unpredictable, has set Russia off once more on a totally different course.

History is born, says Professor Kluchevsky, of the inter- action of the individual human personality and the human community. And we are inclined to attribute the peculiar quality of Russian history to the low esteem in which, ever since the days of the Muscovite Empire, the individual person- ality has been held. Individualism, in spite of a few towering figures like Ivan the Terrible and Peter the Great, has little place in Russian history. The spirit of personal loyalty, which was inherent both in the feudal system of western Europe and in the tribal organization of the Mongols, is here entirely absent. The Russian obeys ideas, not persons. He moves, and is moved, not individually, but in the mass. He lives by tradition, or by its modern substitute, mass-suggestion. And this goes far to explain the wholesale, almost naive, character of the principal movements in Russian history, and the enormous momentum which they rapidly acquire, once the impulse has been given.

The volume now before us completes the English version of Professor Kluchevsky's work. It is a gathering up of the fragments that remained over from the four preceding volumes, published at various dates between 1911 and 1929. First there is the last section of the History, ranging from the accession of Catherine the Great to the death of Nicholas I. The treatment here is far less detailed than in the earlier centuries ; for Professor Kluchevsky, a good Muscovite, is frankly less interested in the " Petersburg period " of Russian history. Then, quite out of its proper order, comes a trans- lation of the four introductory chapters to the whole work, which were, for some reason, not included in the first volume of the English version. These chapters, which contain a general survey of the character and spirit of Russian history, are by far the most important part of the present volume. Lastly, we have a scrappy and unsatisfactory " survey " of the principal pheilomena of Russian history from Peter the Great to the Russo-Japanese war, which has nothing to do with the History proper, and was written by Professor Kluchevsky for a short text-book. It scarcely deserved reproduction here.

It is now, unfortunately, too late to register an effective protest against the nondescript jargon into which this important work has been translated. " From that time forth there becomes very important in our history a Department the effects of whose activity expressed themselves only later," " (professors) arraigned for improper tendenciousness of instruction," " merely need we devote a few words to . . . "- phrases like this occur on every other page. It is more serious still when eccentricity extends to geographical names. Few students will recognize the Baltic Provinces of Russia (now the independent states of Estonia and Latvia) under the unknown and arbitrary designation of " East Zealand." Whether the translator believed himself to be writing English, or whether he deliberately preferred his own peculiar idiom, I cannot say ; but the result, on either hypothesis, is equally