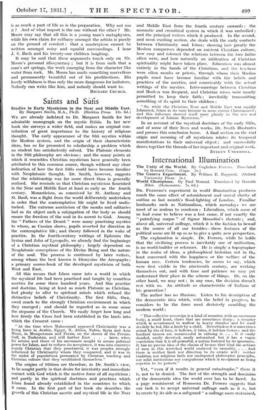 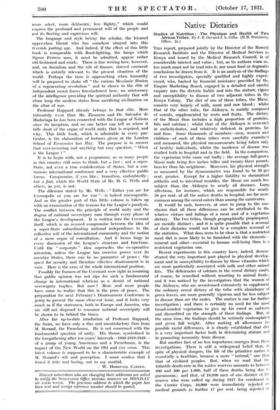 The Unity of the World. By Cuglielmo Ferrero. Translated by Howard Coxe. (Cape. 5s.)

DR. FERRERO'S experiment in world illumination produces much the same effect of astonishment and unreal clarity of outline as last month's flood-lighting of London. Familiar landmarks such as Nationalism, which nowadays we are most of us zealous to condemn ; Liberalism, which some of us had come to believe was a lost cause, if not exactly the " putrefying corpse " of Signor Mussolini's rhetoric ; and, above all, universal suffrage, which it is the fashion to bewail

as the source of all our troubles—these features of the political scene are lit up so as to give a quite new perspective.

The explanation is simple. Dr. Ferrero, while he holds that the civilizing process is inevitably one of unification, is no world-builder or reformer. He is simply a topographer in the realm of ideas, a philosophical historian not in the least concerned with the happiness or the welfare of the human race. Certain tendencies, he seems to say, which were first visible in the nineteenth century, arc working themselves out, and with time and patience we may yet understand their place in the scheme of things. Or, on the

other hand, we may not ; in any case, the decision doesn't rest with us. An attitude so characteristic of Italians of his generation !

The author has no illusions. Listen to his description of the democratic idea which, with the belief in progress, he considers to be the force most decisively moulding the modern world :

" This collective sovereign is a kind of monster, with an enormous body, a small head, claws that are sometimes sharp ; a monster which is accustomed to wallow in heavy slumber and let itself docilely be led, like a lamb by a child. Nevertheless it is sometimes seized by fits of fury, it bellows, it bites, it belches flames ; and the hardiest tamers are unsuccessful in calming it. . . . It is easily dazzled, easily deceived, easily astonished but it has a vague conviction that it is all-powerful, a notion fostered by its ignorance. It has no precise idea of the chains of bronze that bind the actions of men in this wretched world enslaved to causality. . . . And there is neither limit nor direction to its erratic will : neither tradition nor religious faith nor undisputed philosophic principles, nor solid institutions nor compulsions which it recognizes as being superior to its powers."

Yet, " even if it results in general catastrophe," there it is, not to be denied. The fact of the strength and dominion of the democratic idea the world over has to be faced. In a page reminiscent of Rousseau Dr. Ferrero suggests that our task is to accept universal suffrage such as it is, but to create by its side as a safeguard " a suffrage more restrained,

more select, more deliberate, less flighty," which would express the profound and permanent will of the people and not its fleeting and capricious will.

The language and style betray the scholar, the leisured upper-class liberal who has somehow strayed into this feverish jostling age. And indeed, if the effect of this little book is comparable with flood-lighting, the lamps which Signor Ferrero uses, it must be admitted, appear rather old-fashioned and crude. There is fine writing here, however, and, on Socialism and the role of finance, shrewd comment which is entirely relevant to the present situation of the world. Perhaps the time is approaching when humanity will be prepared to shake off " the curious Messianic illusion of a regenerating revolution " and to cleave to the elite of independent moral forces foreshadowed here, an aristocracy of the intelligence providing the spiritual authority that will alone keep the modem states from sacrificing civilization on the altar of war.

Professor Rappard already belongs to that elite. More intimately even than Mr. Zimmem and Dr. Salvador de Madariaga he has been connected with the League of Nations since its inception, and no one better can tell us where it falls short of the organ of world unity that is required, and why. This little book, which is admirable in every par- ticular, is the elaboration of lectures given at the London School of Economics last May. The purpose is to answer that ever-recurring and anything but easy question, " What is the League ? "

It is to begin with, not a programme, as so many people in this country still seem to think, but a fact ; not a super- State, not even a true confederation of States, but a con- tinuous international conference and a very effective public forum. Compromise, if you like ; transition, undoubtedly ; but a fact, which the World State of Mr. H. G. Wells and others, as yet, is not.

The dilemma stated by Mr. Wells—" Either you are for Cosmopolis or you are for war "—is indeed unescapeable. And so the greater part of this little volume is taken up with an examination of the reasons for the League's paralysis. The conflict between the principle of world unity and the dogma of national sovereignty runs through every phase of the League's development. It is written into the Covenant itself, which is an avowed compromise between the idea of a super-State subordinating national independence to the collective will of the international community and the notion of a mere organ of consultation. And it looms large in every discussion of the League's structure and functions. Until the " corporate " idea supersedes the co-operative intention, unless the League has coercive power over its member States, there can be no guarantee of peace ; the quest for security and therefore effective disarmament is in vain. Here is the crux of the whole international position.

'Possibly the framers of the Covenant were right in assuming that public opinion was not ripe for such a fundamental . change in international relations as a denial of national sovereignty implies. But now ? More and more people . have come to realize that this is the price of peace. The preparation for next February's Disarmament Conference is going to present the same clear-cut issue, and it looks very 2-inuch as if the statesmen, both in Europe and America, who are still not disposed to renounce national sovereignty will be shown to be behind the times.

After the up-to-date irradiation of Professor Rappard, the Swiss, we have only a dim and unsatisfactory flare from ' M. Morand, the Frenchman. He is not concerned with the fundamental :question of unity. His theme, symbolized in the foregathering after ten years' intervals-1909-1919-1929- of a group of young Americans and a Frenchman, is the impact of the New World on 'the' Old and vice versa. This latest volume is supposed to be a characteristic example of M. Morand's wit and perception. I must confess that I found it trite and boring, not to say morbid.