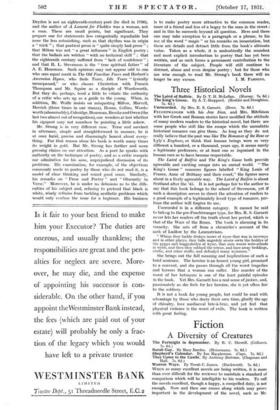 with her Greek and Roman stories have modified the attitude of many modern readers to the historical novel, but there are some people who still like the escape which the unrealistic historical romance can give them. As long as they do not really believe that the past was like The Romance of the Rose or Lyly's Euphues, or think that human beings were so very different a hundred, or a thousand, years ago, it seems surely a legitimate preference, or at least one so ingrained in the human race as to have become respectable.

The Laird of Balfrie and The King's Goose both provide agreeable and exciting escape into an unreal world. " The King's Goose " concerns figures labelled " King Louis of France, Anne of Brittany and their court," the figures move about in a lively agreeable way. The Laird of Balfrie is about Scotland after the '45. It is not perhaps fair to the author to say that this book belongs to the school of Stevenson, yet if such a description serves to direct the attention of readers to a good example of a legitimately loved type of romance, per- haps the author will forgive its use.

Unrecorded is in a different category. It cannot be said to belc-ag to the pre-Feuchtwanger type, for Mrs. R. S. Garnett never lets her readers off the truth about her period, which is that of the Wars of the Roses. The look is alarming in its veracity. She sets off from a chronicler's account of the

sack of Ludlow by the Lancastrians.

She brings out the full meaning and implications of such a brief sentence. The heroine is an honest young girl, promised to a convent, and she passes through all the worst tragedies and horrors that a woman can suffer. Her murder of the worst of her betrayers is one of the least painful episodes in the book. Yet Mrs. Garnett has a real sense of justice, and, passionately as she feels for her heroine, she is yet often fair to the soldiery.

It is not a book for young people, but could be read with advantage by those who decry their own time, glorify the age of chivalry, love mediaeval brie-à-brae, and yet feel that physical violence is the worst of evils. The book is written with great feeling.