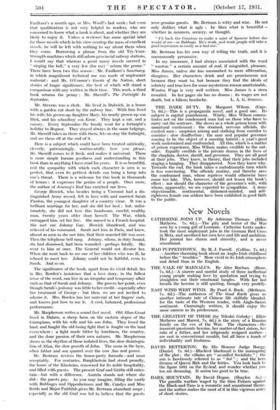 a propaganda novel, and a good one. Its subject is capital punishment. Wisely, Miss Wilson concen- trates not on the condemned man but on those who have to carry out the sentence. She shows us a whole prison tense with unnatural excitement : the strained, nervous officials, the excited men : suspicion arising and stalking from corridor to corridor : slow disaffection : the sane and popular governor coming to be the object of a sneering hatred : a year's good work undermined and confounded. All this, which is a matter of prison experience, Miss Wilson makes credible to the out- sider. Equally credible is the private drama in the lives of the chaplain, doctor, sheriff, and governor. They are all good at their jobs. They knew, in theory, that their jobs included staging a hanging. They disapproved. Now they know why. Towards the end, the book takes a melodramatic turn which is less convincing. The officials mutiny, and thereby save the condemned man, whose reprieve would otherwise have come too late. This, however, should not lessen the book's effect : nor should the character of the governor's wife, with whom, apparently, we are expected to sympathise. A more objectionable, sentimental, dishonest-minded, and self- righteous female can seldom have been exhibited in good faith to the public.