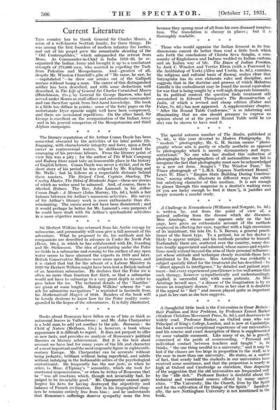 Page 30, 17 October 1931 — Sir Herbert Wilkins has returned from his Arctic voyage by
Close

Sir Herbert Wilkins has returned from his Arctic voyage by

submarine, and presumably will soon give a full account of the adventure. What he proposed to do, his methods and his companions are described in advance in Under the North Pole (Item, 18s.), in which he has collaborated with Dr. Sverding and Mr. Stefansson. The idea of penetrating under the Polar ice-fields in a submarine and coming to the surface of any open water seems to have alarmed the experts in 1919 and later. British Conservative Ministers were more open to reason, and it is stated that but for the advent of a Labour Ministry in 1929 Sir Herbert Wilkins might have been lent a British instead of an American submarine. He declares that the Polar ice is often no more than fourteen feet thick, so that a submarine would not have to submerge to a very great depth in order to pass below the ice. The technical details of the ' Nautilus ' are given at some length. Bishop Wilkins' scheme for " an ark for submarine navigations " is reprinted in facsimile from his Mathematical) Magick of 1648. Readers of the book will be keenly desirous to know how far the Polar reality corre- sponded to the hopes of the adventurers. It is fully illustrated.