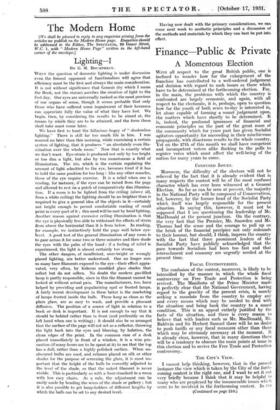 The Modern Home f We shall be pleased to reply

to any enquiries arising from the articles we publish on the Modern Home page. Enquiries should be addressed to the Editor, The SPECTATOR, 99 Gower Street, W .C. 1, with " Modern Home Page" written in the left-hand corner of the envelope.]

BY G. M. BOGIMPHREY. WREN the question of domestic lighting is under discussion even the firmest opponent of functionalism will agree that efficiency must be the first and always the main consideration. It is not without significance that Genesis (by which I mean the Book, not the statue) ascribes the creation of light to the first day. Our eyes are universally ranked as the most precious of our organs of sense, though it seems probable that only those who have suffered some impairment of their keenness can appreciate fully the value of what they have lost. We begin, then, by considering the results to be aimed at, the means by which they are to be attained, and the form these shall take must come later.

We have first to hunt the fallacious bogey of " shadowless lighting." There is still far too much life in him. I was assured no later than this morning, while examining a certain system of lighting, that it produces " an absolutely even illu- mination over the whole room." Now that is exactly what we don't want. Eye-strain is produced not only by too bright or too dim a light, but also by too monotonous a field of illumination. The iris, which is the curtain regulating the amount of light admitted to the eye, becomes tired if it has to hold the same position for too long : like any other muscles, those of the eye require exercise. It is a relief when one is reading, for instance, if the eyes can be raised from the page and allowed to rest on a patch of comparatively dim illumina- tion. If a room is to be lighted from the ceiling (above all, from a white ceiling) the lighting should be no brighter than is required to give a general idea of the objects in it—certainly not bright enough to permit comfortable reading of small print in every part of it ; this need will be met by local lighting. Another reason against excessive ceiling illumination is that the eye is physically less able to withstand the effects of strain from above the horizontal than it is from below. In reading, for example, we instinctively hold the page well below eye- level. A good test of the general illumination of any room is to gaze across it for some two or three minutes and then shade the eyes with the palm of the hand : if a feeling of relief is experienced, the light is almost certainly too strong.

The other dangers, of insufficient, over-bright or wrongly placed lighting, are better understood. One no longer sees so many bare filaments exposed to the eye—their effect aggra- vated, very often, by hideous moulded glass shades that reflect but do not soften. No doubt the modern gas-tilled lamp is partly responsible, since in this the filament cannot be looked at without actual pain. The manufacturers, too, have helped by providing and popularizing opal or frosted lamps. A fairly recent development in these latter is the marketing of lamps frosted inside the bulb. These keep as clean as the plain glass, are as easy to wash, and provide a pleasant diffusion. The position of a source of light in relation to a book or desk is important. It is not enough to say that it should be behind rather than in front (and preferably on the left hand when one is writing) ; it should also be so arranged that the surface of the page will not act as a reflector, throwing the light back into the eyes and blurring, by halation, the clean edges of the print. In the common case of a desk placed immediately in front of a window, it is a wise pre- caution (if many hours are to be spent at it) to see that the top has a dull, rather than a highly polished surface. When un- obscured bulbs are used, and reliance placed on silk or other shades for the purpose of screening the glare, it is most im- portant that the height of the bulb be correctly adjusted to the level of the shade, so that the naked filament is never visible. This is particularly so with a floor-standard in a room with low easy chairs. As a rule, the adjustment can be easily made by bending the wires of the shade or gallery ; but it is also possible to get lamp-holders of different lengths by .which the bulb can be set to any desired level.

Having now dealt with the primary considerations, we can come next week to aesthetic principles and a discussion of the methods and materials by which they can best be put into effect.