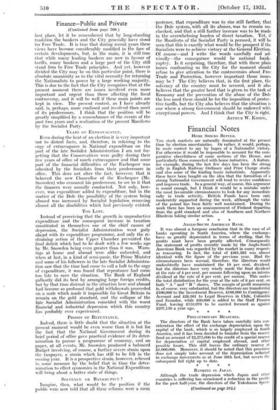 Even during the heat of an election it is very important not to distort facts, and, therefore, in referring to the orgy of extravagance in National expenditure on the part of the late Socialist Administration I am not for- getting that the Conservatives were guilty during their five years of office of much extravagance and that some part of the financial difficulties of the Exchequer was inherited by the Socialists from their predecessors _in office. This does not alter the fact, however, that it behoved the new Chancellor of the Exchequer (Mr. Snowden) who censured his predecessor, to see to it that the finances were soundly conducted. Not only, how- ever, was expenditure added to expenditure, but in the Matter of the Dole the possibility of the system being abused was increased by Socialist legislation removing. almost all the disabilities which had previously existed.