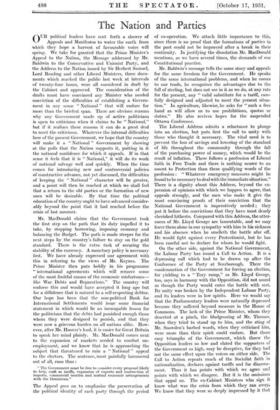 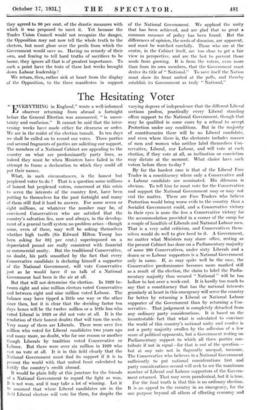 The Nation and Parties

OUR political leaders have sent forth a shower of Appeals and Manifestos to water the earth from which they hope a harvest of favourable votes will spring. We take for granted that the Prime Minister's Appeal to the Nation, the Message addressed by Mr. Baldwin to the Conservative and Unionist Party, and the Address to the Nation issued by Sir Herbert Samuel, Lord Reading and other Liberal Ministers, three docu- ments which reached the public last week at intervals of twenty-four hours, were all considered in draft by the Cabinet and approved. The consideration of the drafts must have convinced any Minister who needed conviction of the difficulties of establishing a Govern- ment in any sense " National " that will endure for more than the briefest span. There are obvious reasons why any Government made up of active politicians is open to criticisms when it claims to be " National," but if it realizes these reasons it can do a great deal to meet the criticisms. Whatever the internal difficulties here of the present Government, we hope that the country will make it a " National " Government by showing at the polls that the Nation supports it, putting in it the national confidence for which it appeals. If in that sense it feels that it is " National," it will do its work of national salvage well and quickly. When the time comes for introducing new and controversial policies of constructive advance, not yet discussed, the difficulties of keeping the " National " character will be greater, and a point will then be reached at which we shall feel that a return to the old parties or the formation of new ones will be desirable. By that time the political education of the country ought to have advanced consider- ably beyond the point that it had reached before the crisis of last summer.

Mr. MacDonald claims that the Government took the first step on the path that its duty impelled it to take, by stopping borrowing, imposing economy and balancing the Budget. The path is made steeper for the next steps by the country's failure to stay on the gold standard. There is the extra task of securing the stability of the currency. A monetary policy is necessary first. We have already expressed our agreement with this in referring to the views of Mr. Keynes. The Prime Minister then puts boldly in his programme " international agreements which will remove some of the most fruitful causes of the economic misfortunes— like War Debts and Reparations." The country will endorse this and would have accepted it long ago but for a diffidence that is natural to a self-respecting debtor. Our hope has been that the non-political Bank for International Settlements would issue some financial statement in which would lie an inescapable lesson for the politicians that the debts had punished enough those whom they were designed to punish, and that they were now a grievous burden on all nations alike. How- ever, after Mr. Hoover's lead, it is easier for Great Britain to speak her mind plainly. Mr. MacDonald comes next to the expansion of markets needed to combat un- employment, and we know that he is approaching the subject that threatened to ruin a " National " appeal to the electors. The sentence, most painfully hammered out of all, runs thus : " The Government must be free to consider every proposal likely to help, such as tariffs, expansion of exports and contraction of imports, commercial treaties and mutual economic arrangements with the Dominions."

The Appeal goes on to emphasize the preservation of the political identity of each party through the period of co-operation. We attach little importance to this, since there is no proof that the formations of parties in the past could not be improved after a break in their continuity. In justifying the dissolution Mr. MacDonald mentions, as we have several times, the demands of our Constitutional practice.

Mr. Baldwin's message tells the same story and appeals for the same freedom for the Government. He speaks of the same international problems, and when he comes to our trade, he recognizes the advantages due to the fall of sterling, but does not see in it as we do, at any rate for the present, any " valid substitute for a tariff, care- fully designed and adjusted to meet the present situa- tion." In agriculture, likewise, he asks for " such a free hand as will allow us to use prohibitions, quotas or duties." He also revives hopes for the suspended Ottawa Conference.

The Liberal Address admits a reluctance to plunge into an election, but puts first the call to unity with those who thought it necessary. The vital need is to prevent the loss of savings and lowering of the standard of life throughout the community through the fall of the purchasing power of money, which would be the result of inflation. There follows a profession of Liberal faith in Free Trade and there is nothing nearer to an assent to Protection than these qualifying words of the profession : " Whatever emergency measures might be found to be necessary to deal with the immediate situation." There is a dignity about this Address, beyond the ex- pression of opinions with which we happen to agree, that appeals strongly, and the men who make it give the most convincing proofs of their conviction that the National Government is imperatively needed ; they put it before the convictions that they have most dearly cherished hitherto. Compared with this Address, the utter- ances of Mr. Lloyd George are lamentable, and we may leave them alone in our sympathy with him in his sickness and his absence when he smelleth the battle afar off. He would fight against every Protectionist, but he has been careful not to declare for whom he would fight.

On the other side, against the National Government, the Labour Party has issued a Call to Action. It is a depressing call which had to be drawn up after the Conference of the Party at Scarborough. There the condemnation of the Government for forcing an election, for yielding to a " Tory ramp," as Mr. Lloyd George, too, says in harmony with the Opposition, did not sound as though the Party would enter the battle with zest. Its unity was broken by the Independent Labour Party, and its leaders were in low spirits. Here we would say that the Parliamentary leaders were naturally depressed because they suffered beyond measure in the House of Commons. The lash of the Prime Minister, whom they deserted at a pinch, the bludgeoning of Mr. Thomas, when they tried to stand up to him, and the sting of Mr. Snowden's barbed words, when they criticized him, were more than their spirit could endure. But those easy triumphs of the Government, which threw the Opposition leaders so low and elated the supporters of the Government so high, may be deceptive, for they had not the same effect upon the voters on either side. The Call to Action repeats much of the Socialist faith in nationalization, declares against tariffs and for disarma- ment. Thus it has points with which we agree and points with which we disagree. But it is the omissions that appal us. The ex-Cabinet Ministers who sign it know what was the crisis from which they ran away We know that they were so deeply impressed by it that they agreed to 90 per cent. of the drastic measures with which it was proposed to meet it. Yet because the Trades Union Council would not recognize the danger, the Opposition may not now tell the whole truth to the electors, but must gloze over the perils from which the Government would save us. Having no remedy of their own, and fearing to tell hard truths of sacrifices to be borne, they ignore all that is of greatest importance. To such a point have the tests of these last weeks brought down Labour leadership !

We return, then, rather sick at heart from the display of the Opposition, to the three manifestos in support of the National Government. We applaud the unity that has been achieved, and are glad that so great a common measure of policy has been found. But the differences of opinion, the seeds of disunion, are apparent, and must be watched carefully. Those who are at the centre, in the Cabinet itself, are too close to get a fair view in perspective, and are the last to prevent those seeds from growing. It is from the voters, even more than from its own members, that the Government must derive its title of " National." To save itself the Nation must show its front united at the polls, and thereby establish its Government as truly " National."