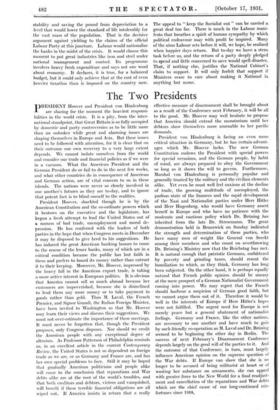 PRESIDENT Hoover and President von Hindenburg arc sharing for the moment the heaviest responsi- bilities in the world crisis. It is a pity, from the inter- national standpoint, that Great Britain is so fully occupied by domestic and party controversies as to be little more than an onlooker while great and alarming issues are shaping themselves in Europe and Asia. But these issues need to be followed with attention, for it is clear that on their outcome our own recovery to a very large extent depends. We cannot isolate ourselves from the world and consider our trade and financial policies as if we were in a vacuum. What the American President and the German President do or fail to do in the next few weeks, and what other countries do in consequence of American and German action, are of vital concern to us in these islands. The nations were never so closely involved in one another's futures as they are to-day, and to ignore that potent fact is to blind oneself to the realities.

President Hoover, shackled though he is by the American Constitution and the co-ordinate powers which it bestows on the executive and the legislature, has begun a fresh attempt to lead the United States out of a morass of bad trade, unemployment and moral de- pression. He has conferred with the leaders of both parties in the hope that when Congress meets in December it may be disposed to give heed to his suggestions. He has induced the great American banking houses to come to the rescue of the lesser banks, many of which are in a critical condition because the public has lost faith in them and prefers to hoard its money rather than entrust it to their keeping. Moreover, Mr. Hoover, impressed by the heavy fall in the American export trade, is taking a more active interest in European politics. It is obvious that America cannot sell so much abroad because her customers are impoverished, because she is disinclined to lend them any more money or to take payment in goods rather than gold. Thus M. Laval, the French Premier, and Signor Grandi, the Italian Foreign Minister, have been invited to Washington so that Mr. Hoover may learn their views and discuss their suggestions. We must not over-estimate the importance of these meetings. It must never be forgotten that, though the President proposes, only Congress disposes. Nor should we credit the American people with any exceptional degree of altruism. As Professor Patterson of Philadelphia reminds us, in an excellent article in the current Contemporary Review, the United States is not so dependent on foreign trade as we are, or as Germany and France are, and has her own special problems to face. Still it may be hoped that gradually American politicians and people alike will come to the conclusion that reparations and War debts alike are at the root of the world's troubles, and that both creditors and debtors, victors and vanquished, will benefit if these terrible financial obligations are all wiped out. If America insists in return that a really effective measure of disarmament shall be brought about as a result of the Conference next February, it will be all to the good. Mr. Hoover may well hesitate to propose that America should extend the moratorium until her debtors show themselves more amenable to her pacific demands.

President von Hindenburg is facing an even more critical situation in Germany, but he has certain advant- ages which Mr. Hoover lacks. The new German Constitution endows the President with special powers for special occasions, and the German people, by habit of mind, are always prepared to obey the Government so long as it shows the will to govern. Furthermore, Marshal von Hindenburg is personally popular and generally trusted by the military and the civilian elements alike. Yet even he must well feel anxious at the decline of trade, the growing multitude of unemployed, the parlous state of the finances and the rapid development of the Nazi and Nationalist parties under Herr Hitler and Herr Hugenberg, who would have Germany assert herself in Europe and who have no patience with the moderate and cautious policy which Dr. Bruning has inherited from the late Dr. Stresemann. The great demonstration held in Brunswick on Sunday indicated the strength and determination of these parties, who have many men of weight like General von Seeckt among their members and who count on overthrowing Dr. Bruning's Ministry now that the Reichstag has met. It is natural enough that patriotic Germans, embittered by poverty and grinding taxes, should resent the humiliation to which, as they think, Germany has long been subjected. On the other hand, it is perhaps equally natural that French public opinion should be uneasy at the mere prospect of a German Nationalist Government coming into power. We may regret that the French should harbour a suspicion of German good faith, but we cannot argue them out of it. Therefore it would be well in the interests of Europe if Herr Hitler's hopes were not fulfilled. The urgent need for Europe is not merely peace but a general abatement of nationalist feelings. Germany and France, like the other nations, are necessary to one another and have much to gain by such friendly co-operation as M. Laval and Dr. Bruning seemed to be beginning the other day in Berlin. The success of next February's Disarmament Conference depends largely on the good will of the parties to it. And the outcome of that Conference, in turn, must largely influence American opinion on the supreme question of the War debts. If Europe can show that she is no longer to be accused of being militarist at heart or of wasting her substance on armaments, she can appeal with greater force to the New World for a final readjust- ment and cancellation of the reparations and War debts which are the chief cause of our long-continued mis- fortunes since 1918.