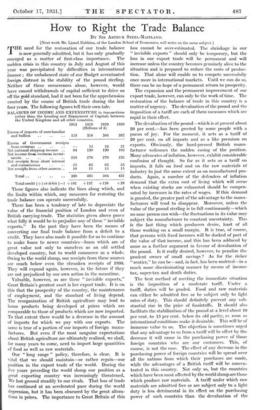 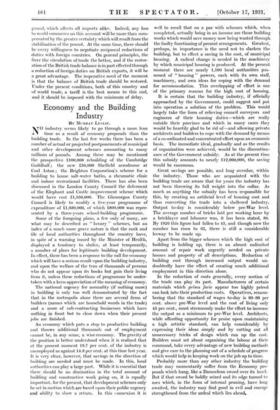 How to Right the Trade Balance

[Next week Mr. Lionel Robbins, of the London School of Economics, will write on the same subject.]

THE need for the restoration of our trade balance is now generally admitted, but it has only gradually emerged as a matter of first-class importance. The sudden crisis in this country in July and August of this year was precipitated by difficulties in international finance ; the unbalanced state of our Budget accentuated foreign distrust in the stability of the pound sterling. Neither of these occurrences alone, however, would have caused withdrawals of capital sufficient to drive us off the gold standard, had it not been for the apprehension created by the course of British trade during the last four years. The following figures tell their own tale.

BALANCES OF INCOME AND EXPENDITURE in transactions (other than the Lending and Repayment of Capital) between the United Kingdom and all other countries.

These figures also indicate the lines along which, and the limits within which, any measures for restoring the trade balance can operate successfully.

There has been a tendency of late to depreciate the value of the financial position of London and even of British carrying-trade. The statistics given above prove what folly it would be to prejudice any of these " invisible exports." In the past they have been the means of converting our final trade balance from a deficit to a credit. They have also made it possible for us to continue to make loans to newer countries—loans which are of great value not only to ourselves as an old settled developed country, but to world commerce as a whole. Owing to the world slump, our receipts from these sources are much below even the shrunken receipts of 1930. They will expand again, however, in the future if they are not prejudiced by our own action in the meantime.

Valuable, however, as are these " invisible exports," Great Britain's greatest asset is her export trade. It is on this that the prosperity of the country, the maintenance of employment, and the standard of living depend. 'The reorganization of British agriculture may lead to home products being developed at prices which are comparable to those of products which are now imported. To that extent there would be a decrease in the amount of imports for which we pay with our exports. The same is true of a portion of our imports of foreign manu- factures. But even if the most sanguine expectations about British agriculture are ultimately realized, we shall, for many years to come, need to import large quantities of food as well as raw materials.

Our " long range " policy, therefore, is clear. It is vital that we should maintain—or rather regain—our position in the export trade of the world. During the five years preceding the world slump our position as a great exporting country was increasingly threatened. We lost ground steadily to our rivals. That loss of trade has continued at an accelerated pace during the world depression, but it has been obscured by the great altera- tions in prices. The importance to Great Britain of this loss cannot be over-estimated. The shrinkage in our " invisible exports " should only be temporary, but the loss in our export trade will be permanent and will increase unless the country becomes genuinely alive to the situation and is prepared to reduce the costs of produc- tion. That alone will enable us to compete successfully once more in international markets. Until we can do so, there can be no hope of a permanent return to prosperity.

The expansion and the permanent improvement of our export trade, however, can only be the work of time. The restoration of the balance of trade in this country is a matter of urgency. The devaluation of the pound and the imposition of a tariff arc each of them' measures which are rapid in their effect.

The devaluation of the pound—which is at present about 20 per cent.—has been greeted by some people with a paean of joy. For the moment, it acts as a tariff of 20 per cent. on all imports and as a like premium on exports. Obviously, the hard-pressed British manu- facturer welcomes the sudden easing of the position. Many advocates of inflation, however, exhibit considerable confusion of thought. So far as it acts as a tariff on imports, it falls on food and on the raw materials of industry to just the same extent as on manufactured pro- ducts. Again, a number of the defenders of inflation demand that the extra cost of living which will occur when existing stocks are exhausted should be compen- sated by increases in the rates of wages. If this demand is granted, the greater part of the advantage to the manu- facturers will tend to disappear. Moreover, unless the value of the pound sterling is to fall continuously—which no sane person can wish—the fluctuations in its value may subject the manufacturer to constant uncertainty. This is the last thing which producers desire, least of all those working on a small margin. It is true, of course, that persons with fixed incomes will be docked of part of the value of that income, and this has been adduced by some as a further argument in favour of devaluation of the pound. Is it really desired, however, to penalize the prudent owner of small savings ? As for the richer " rentier," he can be—and, in fact, has been mulcted—in a much more discriminating manner by means of income tax, super-tax and death duties.

The best method of meeting the immediate situation is the imposition of a moderate tariff. Under a tariff, duties will be graded. Food and raw materials can either be admitted free or be subject only to light rates of duty. This should definitely prevent any sub- stantial rise in the price of foodstuffs. It should also facilitate the stabilization of the pound at a level about 10 per cent. to 15 per cent. below its old parity, as soon as international conditions make it desirable. This will be of immense value to us. The objection is sometimes urged that any advantage to us from a tariff will be offset by the decrease it will cause in the purchasing power of those foreign countries who are our customers. This, of course, is not the case. The effect of any decrease in the purchasing power of foreign countries will be spread over all the nations from which their purchases are made, while the advantages of a British tariff will be concen- trated in this country. Not only so, but the countries which have been most affected by the world slump are those which produce raw materials. A tariff under which raw materials are admitted free or are subject only to a light duty is less detrimental in its effect on the purchasing power of such countries than the devaluation of the pound, which affects. all imports alike. Indeed, any loss to world commerce on thiS account will be more than com- pensated by the greater certainty which will result from the stabilization of the pound. At the same time, there should be every willingness to negotiate reciprocal reductions of duties with foreign countries. On general principles, the freer the circulation of trade the better, and if the restor- ation of the British trade balance is in part effected through a reduction of foreign duties on British exports, it will be a great advantage. The imperative need of the moment is that the balance of British trade should be restored. Under the present conditions, both of this country and of world trade, a tariff is the best means to this end, and it should be imposed with the minimum of delay.