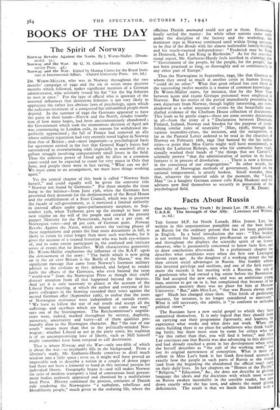 The Spirit of Norway

DR. WORM-MULLER, who was in Norway throughout the two months' campaign of 1940 and the six or seven more decisive months which. followed, makes significant mention of a German administrator, who solemnly issued his fiat " for the big fisheries to start at once." For the type of official who is ignorant of the seasonal influences that determine fisheries is not very likely to appreciate the rather less obvious laws of psychology, upon which the judicious treatment of a conquered but unhumbled people must depend. In the summer of 1940 the Germans appeared to have the game in their hands—Narvik and the North, slender founda- tion of how many hopes, had been unceremoniously abandoned ; the Government which took the momentous decision of 'April 9th was commencing its London exile, its reasons for withdrawal im- perfectly appreciated ; the fall of France had removed an ally whose military reputation had very recently stood higher in Norway than that of Britain ; and—most important—a psychological basis for agreement existed in the fact that General Ruge's forces had surrendered to overwhelming odds (especially in materiel) after a gallant struggle involving comparatively small losses in the field. Thus the cohesive power of blood spilt by allies in a common cause could not be expected to count for very much in Oslo that June, and people there were in fact saying, " What can we do? We must come to an arrangement, we must have things working again."

Yet the central chapter of this book is called "Norway finds herself," and could equally well be given the converse title " Norway not found by Germany." For three months the issue hung in the balance—from June 13th, when the Germans first presented their demands for the dethronement of the Royal House and the establishment of a State Council, which was to preserve the facade of self-government, as it exercised a limited authority in internal affairs under quasi-parliamentary auspices, to Sep- tember 25th, when Terboven gave up the attempt to base any new regime on the will of the people and created the present puppet Ministry for the Protectorate, based on 2 per cent. of Norwegian votes—and 98 per cent. of German guns. Norway Revolts Against the Nazis, which covers the varying phases of these negotiations and prints the four main documents in full, is likely to retain its value longer than most such war-books, for it gives the account of a trained historian who was both eye-witness of, and to some extent participant in, the confused and intricate series of events that he describes. With characteristic generosity Dr. Worm-MUller emphasises the influence of the R.A.F. upon the denouement of the story : " The battle which is now going on in the air over Britain is the Battle of the Marne," was the significant message that came from Norway's foremost military adviser to the civilians as they debated, and helped to render futile the efforts of the Germans, who even banned the term " world-war " from the Norwegian Press as though they could distract attention from all that happened beyond the skerries. And yet it is only necessary to glance at the account of the Liberal Party meeting, at which the author and everyone of his party colleagues in the Storting recorded their votes against the second German offer (September loth), to realise that the roots of Norwegian resistance were independent of outside events. " We have to follow the star of our youth and accept all the sufferings and sacrifices which are bound to come our way," says one of the Stortingsmen. The Reichcommissar's negotia- tions were, indeed, marked throughout by secrecy, duplicity, autocracy, uncertainty and hurry—all of them qualities pro- foundly alien to the Norwegian character. But " the star of our youth ' means more than that to the politically-minded Nor- wegian: whether Liberal or not in the party sense, his tradition is of an uncompromising love of liberty, such as Mill himself might sometimes have been tempted to call doctrinaire.

That is where Norway and the War—only one-fifth of which is about the war—so invaluably fills in the background. From a lifetime's study, Mr. Gathorne-Hardy contrives to distil much wisdom into a little space ; even so, it might well have proved an impossible task to describe a nation in a couple of dozen pages had there not been a leitmotif to hand in this national passion for individual liberty. Geography began it—and still makes Norway (in spite of modern transport) a land of contentious local govern- ment bodies zealously appraised and chastised by a multifarious local Press. History continued the process, centuries of Danish rule rendering the Norwegians " a turbulent, rebellious and bloodthirsty people," much given to the seafaring life, where the officious Danish amtmand could not get at them. Economic' finally settled the matter : for while other nations came early under the discipline of the factory and the workshop, the dominant type in Norway continued until within living memory to be that of the Bonde with his almost inalienable family-holding and his much-vaunted independence: " Frederick may be King in Denmark, but I am King in Bjerkreim." As for the constitu- tional aspect, Mr. Gathorne-Hardy feels justified in claiming that " Government of the people, by the people, for the people,' has not been practised so long, so thoroughly and so continuously in any other part of Europe."

Thus the Norwegians in September, 1940, like that German to whom they owed so much at another crisis in human history, " could do no other." What that great refusal has cost them in the succeeding twelve months is a matter of common knowledge: Dr Worm-MUller states, for instance, that by the New Year between 9,00o and 1o,000 Gestapo personnel were employed in Norway. But his stories of the period immediately preceding his own departure from Norway, though highly interesting, are over- shadowed as a sober measure of events by the beautifully mar- shalled evidence of the Chatham House collection of documents. This leads us by gentle stages—there are some seventy documents in all—from the irony of a " Declaration between Denmark, Finland, Iceland, Norway and Sweden for the purpose of estab- lishing similar rules of neutrality " (May, 1938), through the various neutrality-crises, the invasion, and the occupation, as far as the Pastoral Letter ordered to be read in the churches of Norway on February 16th, 1941 (but banned by the lay autho- rities—a point that Miss Curtis might well have mentioned), in which the Lutheran Bishops, men who for centuries have tradi- tionally washed their hands of " the things that are Caesar's," solemnly protest " that the administration of justice in its basic features is in process of dissolution. . . . There is now a ferment in the conscience of our congregations." In other words, the continuity of Norwegian methods of government, based on the national temperament, is utterly broken. Small wonder, then, that, whatever the material odds at the moment, the " Long Man " (as 4 haughty German censor calls King Haakon) and his advisers now find themselves so securely in possession of the