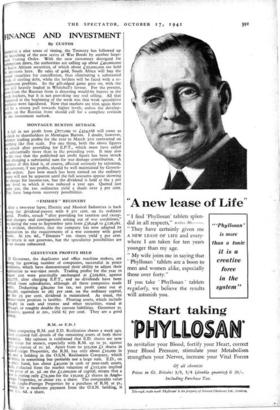 HowING a nice sense of timing, the Treasury has followed up he launching of the new series of War Bonds by another large- e Vesting Order. With the now customary disregard for edemption dates, the authorities are calling up about £4o,000,000 South African securities, of which about £30,000,000 are held • investors here. By sales of gold, South Africa will buy the .ested securities for cancellation, thus eliminating a substantial ock of sterling debt, while the holders will be faced with a re- Tstment problem. So the gilt-edged game goes on, with the cc still heavily loaded in Whitehall's favour. For the present, tws from the Russian front is deterring would-be buyers in the Lock markets, but it is not provoking any real selling. All that appened at the beginning of the week was that weak speculative sitions were liquidated. Now that markets are trim again there it be a strong pull towards higher levels, unless the develop- mts on the Russian front should call for a complete revision the investment outlook.

MONTAGUE BURTON SETBACK A fall in net profit from £677,099 to £454,168 will come as shock to shareholders in Montague Burton. I doubt, however, hether trading profits for the year to March 31st contracted on vthing like that scale. For one thing, both the above figures struck after providing for E.P.T., which must have called substantially more than in the preceding year. It may also the case that the published net profit figure has been struck er charging a substantial sum for war damage contribution. A usiness of this kind is, of course, affected seriously by rationing, tt turnover, if not profits, should be well maintained by Govern- nt orders. Just how much has been earned on the ordinary ares will not be apparent until the full accounts appear showing e charge for income-tax, but the dividend is held at the 5 per level to which it was reduced a year ago. Quoted just der par, the los. ordinaries yield a shade over 5 per cent. ey have long-term recovery possibilities.

After a two-year lapse, Electric and Musical Industries is back ong the dividend-payers with 6 per cent. on its ordinary pital. Profits, struck " after providing for taxation and excep- al charges and contingencies arising out of war conditions," se during the year to September 30th from £38,048 to £126,581. is evident, therefore, that the company has now adapted its ganisation to the requirements of a war economy with good sults. At 125. 6d., " Emmies " tos. shares yield 5 per cent. e return is not generous, but the speculative possibilities are

D. Gestetner, the duplicator and office machine makers, are ong the growing number of companies, successful in peace nditions, which have demonstrated their ability to adjust their ganisation to war-time needs. Trading profits for the year to ugust 31st were practically unchanged at £229,601, against '32,778, after charging E.P.T., and no dividends have been edited from subsidiaries, although all these companies made fits. Deducting £8o,000 for tax, net profit came out at 22,386, equivalent to 264 per cent. on the ordinary capital, the 25 per cent. dividend is maintained. As usual, the ante-sheet position is healthy. Floating assets, which include 92462 in cash and trustee and other securities, stand at 84446. or roughly double the current liabilities. Gestetner 5s. d:naries, quoted at 205., yield 64 per cent. They are a good ]ding.

Since comparing R.M. and E.D. Realisation shares a week ago, nave received full details of the remaining assets of both these

panics. My opinion is reinforced that E.D. shares are, now

.ter value for money, especially with R.M. up to 5s. against

do-Foreign Properties, the R.M. has only about £to,000 in