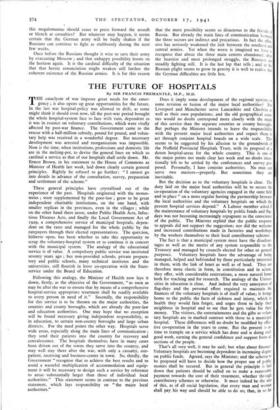 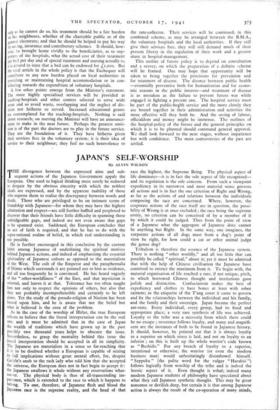 THE cataclysm of war imposes great needs for the emer- gency ; it also opens up great opportunities for the future. In the last war hospital-policy was allowed to drift, as some might think it should even now, till the post-war period brought the whole hospital-system face to face with ruin, dependent as it was in essence on voluntary contributions, which were vitally affected by post-war finance. The Government came to the rescue with a half-million subsidy, pound for pound, and volun- tary help was received in a wonderful degree. But necessary development was arrested and reorganisation was impossible. Now is the time, when institutions, professions and domestic life are in the melting-pot, to devise the general lines on which so cardinal a service as that of our hospitals shall settle down. Mr. Ernest Brown, in his statement to the House of Commons as Minister of Health last week, laid down clearly certain general principles. Rightly he refused to go further: "I cannot go into details in advance of the consultation, survey, preparation and settlement of the scheme."

These general principles have crystallised out of the experience of the past. Hospitals originated with the monas- teries ; were supplemented by the poor-law ; grew to be great independent charitable institutions, on the one hand, with smaller replicas in the provinces, even in the villages ; while on the other hand there arose, under Public Health Acts, Infec- tious Diseases Acts, and finally the Local Government Act of 1929, a comprehensive service of municipal hospitals, depen- dent on the rates and managed for the whole public by the ratepayers through their elected representatives. The question, hitherto open, has been whether to take this opportunity to scrap the voluntary-hospital system or to continue it in concert with the municipal system. The analogy of the educational service is of value. A compulsory public service was instituted seventy years ago ; but non-provided schools, private prepara- tory and public schools, many technical institutes and the universities, still flourish in loose co-operation with the State- service under the Board of Education.

Following this analogy, the Minister of Health now lays it down, firstly, as the objective of the Government, " as soon as may be after the war to ensure that by means of a comprehensive hospital-service appropriate treatment shall be readily available to every person in need of it." Secondly, the responsibility for this service is to be thrown on the major authorities, the counties and county boroughs, which are already the poor-law and education authorities. One may hope that no exception will be found necessary giving independent responsibility, as in education, to certain non-county boroughs and large urban districts. For the need points the other way. Hospitals serve wide areas, especially along the main lines of communication ; they send their patients into the country for recovery and convalescence. The hospitals themselves have in many cases been driven out of the towns they serve into the country, and may well stay there after the war, with only a casualty, out- patient, receiving and business-centre in town. So, thirdly, the Government " recognise that to achieve the best results and to avoid a wasteful multiplication of accommodation and equip- ment it will be necessary to design such a service by reference to areas • substantially larger than those of individual local authorities." This statement seems in contrast to the previous statement, which lays responsibility on " the major local authorities." Does it imply some development of the regional system; or some revision or fusion of the major local authorities? For Liverpool and Manchester serve Lancashire and Cheshire as well as their own populations; and the old geographical coun- ties would no doubt correspond more closely with the needs of this service than the separate counties or county boroughs. But perhaps the Minister intends to leave the responsibility with the present major local authorities and expect them to act through conjoint hospital boards on a wide scale. This seems to be suggested by his allusion to the groundwork of • the Nuffield Provincial Hospitals Trust, with its proposal of a dozen hospital-areas for the whole country. This is one of the major points not made clear last week and no doubt inten- tionally left to be settled by the conferences and survey pro- posed. Personally, I hate conjoint authorities. No man can serve two masters—properly. But sometimes they are inevitable.

But the decision as to the voluntary hospitals is clear. The duty laid on the major local authorities will be to secure the co-operation of the voluntary agencies engaged in the same field and to place " on a more regular footing the partnership between the local authorities and the voluntary hospitals on which the present hospital services depend." A Labour member asked if the maintenance of voluntary hospitals by public funds and flag- days was not becoming increasingly repugnant to the conscience of the public. The Minister replied that the public response to appeals did not support the suggestion; nor did the welcome and increased contributions made in factories and workshops by the workers themselves to their local contributory schemes.

The fact is that a municipal system must have the disadvan- tages as well as the merits of any system responsible to the Treasury and managed by councils elected for other or general purposes. Voluntary hospitals have the advantage of being managed, helped and befriended by those particularly interested in them, with the link of heart as well as of head. They are therefore more elastic in form, in constitution and in action: they offer, with considerable reservations, a more natural home both for teaching and for research. The analogy of the Univer- sities in education is close. And indeed the very annoyance of flag-days and the personal effort required to maintain the finances of the voluntary hospitals is of itself of value; it brings home to the public the facts of sickness and injury, which in health they would fain forget, and urges them to help their neighbour in hospital and to see that he gets value for their money. The visitors, the entertainments and the gifts to volun- tary hospitals are in marked contrast with those to a municipal hospital. These differences will no doubt be modified by effec- tive co-operation in the years to come. But the present is nc time to trample on a service which has done and is doing such good work, earning the general confidence and support from al' sections of the people.

That's all very well, it may be said; but what about finance. Voluntary hospitals are becoming dependent in increasing degree on public funds. Agreed, says the Minister; and the scheme te be proposed will have to decide how the proper use of public monies shall be secured. But in general the principle is laid down that patients should be called on to make a reasonable payment towards the cost of their treatment, whether through contributory schemes or otherwise. It must indeed be the 101 of this, as of all social legislation, that every man and woman shall pay his way and should be able to do so; that, in so far only as he cannot do so, his treatment should be a fair burden on his neighbours, whether of the charitable public or of the general electorate; and that he should be helped to pay his way by saving, insurance and contributory schemes. It should, how- ever, be brought home vividly to the beneficiaries, as to sup- porters of the hospitals, what the actual cost of their treatment per bed per day and of special treatment and nursing actually is; it is absurd to state that a bed can be endowed for Et,omo. But the vital article in the whole policy is that the Exchequer will contribute to any new burden placed on local authorities in providing or maintaining hospital accommodation or in con- tributing towards the expenditure of voluntary hospitals.

A few other points emerge from the Minister's statement. The more highly specialised services will be provided at teaching-hospitals and other centres selected to serve wide areas and so avoid waste, overlapping and the neglect of dis- tricts not hitherto so served. Increased educational grants are contemplated for the teaching-hospitals. Nothing is said about research; on nursing the Minister will have an announce- ment to make in the near future. Perhaps the greatest omis- sion is of the part the doctors are to play in the future service. They are the foundation of it. They have hitherto given their services free in the voluntary system; it is their idea of service to their neighbour; they feel no such benevolence to the rate-collector. Their services will be continued, in this combined scheme, as may be arranged between the B.M.A., the voluntary hospitals and the local authorities. If they still give their services free, they will still demand much of their present liberty in the regulation of their work and a greater share in hospital-management.

This outline of future policy is to depend on consultation and a survey, on which the preparation of a definite scheme will be framed. One may hope that opportunity will bo taken to bring together the provisions for prevention and for treatment of disease. The divorce between public health —essentially preventive both for humanitarian and for econo- mic reasons in the public interest—and treatment of disease is as mistaken as the failure to prevent future war while engaged in fighting a present one. The hospital service must be part of the public-health service and the more closely they are bound together in their administration and activities the more effective will they both be. And the saving of labour, officialdom and money might be immense. The outlines of the hospital-policy of the future and the general principles on which it is to be planned should command general approval. We shall look forward to the next stages, without impatience but with confidence. The main controversies of the past are settled.