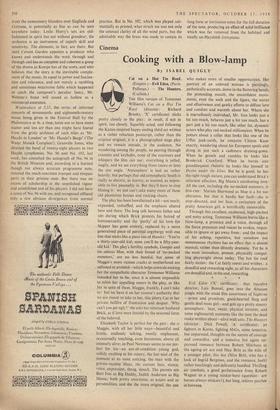 Cat on a Hot Tin Roof. (Empire.)—Evil Eden. (Paris- Pullman.) — The Hunters. (Carlton.) THE film version of Tennessee Williams's Cat on a Hot Tin Roof (director : Richard Brooks; 'X' certificate) sticks pretty closely to the play : in result, if not in spirit, too closely. Superbly acted, and following the Kazan-inspired happy-ending third act written as a rather reluctant postscript, rather than the original original, it is a photographed stage play and we remain outside, in the audience. No wandering among the people, no peering through crannies and keyholes, none of the murmurs and whispers the film can use : everything is yelled, stagily, and we see everything from (more or less) the one angle. 'Atmosphere' is laid on rather heavily; but perhaps that old atmospheric South is really as electric, as stormy, as scented, as impos- sible to live peaceably in. But they'll have to stop filming it : we just can't take many more of those old plantation houses and rocking chairs.

The play has been bowdlerised a bit—not much; expanded, reshuffled, and the emphasis altered here and there. The long talk between father and son during which Brick protests his hatred of homosexuality and the 'purity' of his love for Skipper has gone entirely, replaced by a more generalised piece of parental argybargy with one line that sticks like a piece out of Hamlet: 'You're a thirty-year-old kid; soon you'll be a fifty-year- old kid.' The play's fertility symbols, Gooper and his odious Mae, with their brood of 'no-necked monsters,' are no less hateful, but some of Maggie's more vicious cracks at motherhood are softened or avoided—which helps towards making her the sympathetic character Tennessee Williams intended her to be, since it is almost impossible to relish her appalling sneers in the play, or like her in spite of them. Maggie, frankly, I can't take to : but we have it on her creator's authority that we are meant to take to her, this jittery Cat in her private hellfire of frustration and despair. 'Why can't you get ugly?' she asks her reluctant husband Brick, as if love were limited by the seasonal form of the beloved.

Elizabeth Taylor is perfect for the part : she is Maggie, with all her little ways—beautiful and brittle, endlessly talking, mostly unpleasant, occasionally touching, even humorous, above all intensely alive; as Paul Newman seems to me per- fect for his—an out-of-condition young god, sulkily exulting in his misery, the lost Soul of the moment at its most enticing, the man with the private-income blues, the current face, stance, voice, expression, shrug, slouch. The parents are Burl Ives as Big Daddy, Judith Anderson as Big Mama; both pretty enormous, as actors and as personalities, and she the more original, the one who makes more of smaller opportunities. Her portrait of an unloved woman is piercingly, pathetically accurate, down to the fluttering hands, the pretending mouth, the unconfident move- ments, even the walk and the figure, the waves and effusiveness and gawky efforts to diffuse love and comfort and warmth about her. Where she is marvellously individual, Mr. Iyes looks just a bit too much, behaves just a bit too much, has a part just a bit too much, like other fat, dynamic actors who play red-necked Millionaires. When he potters about a cellar that looks like one of the Uffizi junk-yards, he conjures Citizen Kane exactly, wandering about his European spoils and dying in just such a cashmere dressing-gown. When he growls and rumbles he looks like Broderick Crawford. When he bursts into grandiloquent rhetoric he looks like himself in Desire under the Elms. But he is good, he has the right rough stature, you can understand Brick's reluctant affection, Big Mama's unrelenting love. All the cast, including the no-necked monsters, is first-rate : Marion Sherwood as Mae is a bit too obtrusive, but that is hardly her fault—she is over-directed, and her face, a caricature of the pretty American girl, is horrifically memorable.

Through this excellent, exuberant, high-pitched and noisy acting, Tennessee Williams burns like a blow-lamp, a presence and a voice, through all the fierce presences and voices he evokes, impos- sible to ignore or get away from : and the impact of his aching, repetitive, but somehow not monotonous rhythms has an effect that is almost musical, rather than directly dramatic. Yet he is the most immediate, present, physically compel- ling playwright about today. The hot tin roof fairly sizzles : the Cat fairly roasts and writhes : a dreadful and rewarding sight, as all his characters are dreadful and, in the end, rewarding.

Evil Eden ('X' certificate): that macabre director, Luis Bunuel, goes into the Amazon jungle with the usual film assortment of fugitives —priest and prostitute, good-hearted thug and gentle deaf-mute girl—and gets up a pretty steamy atmosphere : heat, sweat, physical torment, and some nightmarish moments like the time the dead snakerwrithes about—alive with ants. The Hunters (director : Dick Powell; 'A' certificate): jet fighters in Korea, fighting MiGs, some tentative, but unpursued, thoughts on the nature of courage and cowardice, and a tentative but again un- pursued romance between Robert Mitchuni as the ageing air ace and May Britt as the wife of a younger pilot, this last (Miss Britt, who has a look of Ingrid Bergman, and the romance, both) rather touchingly and delicately handled. Thrilling air combats, a good performance from Robert Wagner as a young stinker-hero (question : are heroes always stinkers?), but long, tedious patches in between.