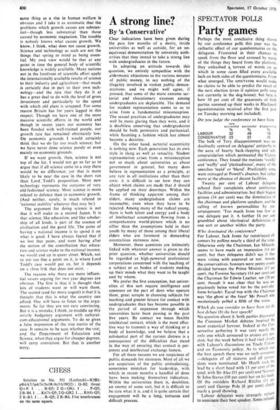 Clear indications have been given during the past few months of a desire, inside universities as well as outside, for an un- equivocal demonstration by university auth- orities that they intend to take a strong line with undergraduates in the future.

In adopting an attitude towards this question, we entirely sympathise with the aldermanic objections to the various misuses of public money, to say nothing of the illegality involved in violent public -demon- strations, and we might well agree, if pressed, that some of the more extreme sar- torial and elocutionary excesses among undergraduates are deplorable. The demand for student representation seems to us to arise from a fundamental misconception.

The sexual practices of undergraduates may well be _pore glaring than they were, and it is doubtless unnerving that undergraduates should be both permissive and puritanical, while flaunting a fashion which has almost become a doctrine.

On the other hand, sartorial eccentricity is nothing new. Each generation has its own style in slang as well as sexuality. Student representation arises from a misconception not so much about universities as about government in general, but many dons

believe in ,representation as a principle, at any rate in all institutions other than their

own; it is difficult to see how they can object when claims are made that it should be applied on their doorsteps. Within the frame of thinking apparent among their elders, many undergraduate claims are reasonable, even when they have to be rejected. Among many of the radical young.

there is both talent and energy and a body of intellectual assumptions flowing from a comprehensive world-picture which is no sillier than the assumptions held in their youth by many of those among their liberal elders who are foremost in demanding ostentatious sternness now.

Moreover, these questions are intimately linked with whatever answer is given to the prior question, whether universities should be regarded as high-powered professional corporations concerned with the teaching of a subject or as bodies of students making up their minds what they want to be taught and by whom.

We prefer the first conception, but univer- sities of this sort require intelligence and openness on the part of dons who operate them, great scruple in choosing subjects for teaching and greater leisure for contact with undergraduates than has become possible in the period of expansion through which universities have been passing in the past five years. By contact we mean flexible intellectual contact, which is the most effec- tive way to transmit a way of thinking or a body of knowledge, and we believe that a substantial part of the current distress is a consequence of the difficulties that stand in the way of ensuring that contact is per- sistent and intellectual exchange honest.

For all these reasons we are suspicious of public demands for sternness. Most of all we are suspicious of the public attitudinising, sometimes mistaken for leadership, with which in recent months a handful of dons have been making themselves ridiculous. Within the universities there is, doubtless, an enemy of some sort, but it is difficult to be sure what it is, and it is quite certain that engagement will be a long, tortuous and difficult process.