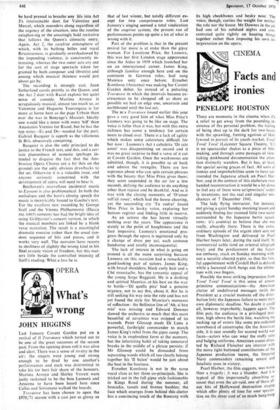 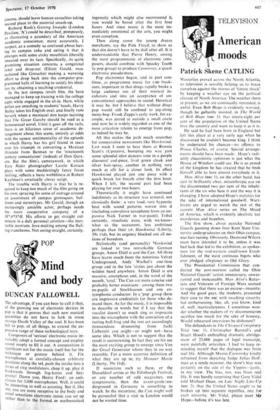 There are moments in the cinema when it's a relief to get away from the pounding in- sistence of the personal problem, the feeling of being shut up in the dark for two hours with the sprawling, fretting egotism of Hol- lywood in pursuit of its youth market. Tora! Tora! Tora! (Leicester Square Theatre, 'IP) is no spectacular shakes as a piece of film- making, and through some passages of slow. ticking deskbound documentation the atten- tion distinctly wanders. But it has, at least, the special saving graces of fact. All sorts of ironies and improbabilities seem to have sur- rounded the Japanese attack on Pearl Har- bor; and in the context of this elaborate two. handed reconstruction it would be a let-down to feel any of them were scriptwriters' order-

, ly inventions, not the real and singular mis- chances of 7 December 1941.

The lady flying instructor, for instance, out giving a quiet Sunday morning lesson and suddenly finding her stunned little two-seater surrounded by the Japanese battle squad- rons: it's essential to believe that she was really, absurdly there. There is the extra- ordinary episode of the urgent alert sent out from Washington and delivered to Pearl Harbor hours later, during the raid itself, by commercial cable (and an oriental telegraph boy); and the predicament of the Japan- ese embassy, stuck on Sunday morning with- out a security-cleared typist, so that the fate- ful appointment with Cordell Hull is delayed while a harassed clerk bangs out the ultima- tum with two fingers.

Possibly the most striking impression from Tora! Tora! Tora! is this sense of almost primitive communications—the American clutter of undelivered messages (with the President at a crucial moment off the distri- bution list); the Japanese failure to meet their own diplomatic deadline. No doubt it could all, however improbably, happen again. The film puts the audience in a privileged posi- tion, high above the battle line, watching the racking up of errors like some pre-ordained scoreboard of catastrophe. On the American side, it is cast soundly for second world war faces—actors who can wear the stuffy suits and bulging uniforms. American scenes direc- ted by Richard Fleischer are intercut with the more tight-buttoned contributions of the Japanese production teams, the Imperial Navy commanders remaining severe and fatalistic even in victory.

Pearl Harbor, the film suggests, was worse than a tragedy : it was a blunder. And it is typical of this impersonally absorbing ac- count that even the air-raid, one of those all- out bits of Hollywood destruction staging which offer plenty of time for sour specula- tion on the sheer cost of so much bang-bang

Richard Rush's Getting Straight (London Pavilion, 'X') could be described, pompously, as illustrating a quandary of the American academic conscience; more accurately, I suspect, as a comedy so confused about hav- ing its campus cake and eating it that it .emerges with some sticky mouthfuls liberally smeared over its face. Specifically, its quite promising situation concerns a congenital rebel and drop-out (Elliott Gould, mus- tachioed like Groucho) making a wavering effort to drop back into the computer-pro- grammed halls of learning to satisfy his ideal- ism by obtaining a teaching credential.

In the last campus revolt film, the hero managed to keep up training with the college eight while engaged in the sit-in. Here, while police are smashing in students' heads, Harry Bailey takes his English oral; and finally runs berserk when a maniacal don keeps insisting that The Great Gatsby should be read as a homosexual novel. Until it goes off the rails, there is an hilarious sense of academic de- rangement about this scene, entirely at odds with the square sentimentality of the episode in which Harry has his girl friend in tears over his triumph in converting a Mexican illiterate from Batman to the 'nineteenth century romanticism' (indeed) of Don Quix- ote. But the film's camerawork, in which Easy Rider photographer Laszlo Kovacs plays with some maddeningly fancy focus shifting, reflects a basic wobbliness in Robert Kaufman's erratically clever script.

The trouble with Harry is that he is re- quired to keep too much of the film going on his own, spraying his sense of outrage around an assortment of campus grotesques, buf- foons and stereotypes. Mr Gould, though an increasingly amiable actor, perhaps needs the more cooperative company of a M*A*S*H. His efforts to get straight cul- minate in a daft personal solution—the inev- itable nostrum, love-making among the flail- ing truncheons. Not seeing straight, certainly.