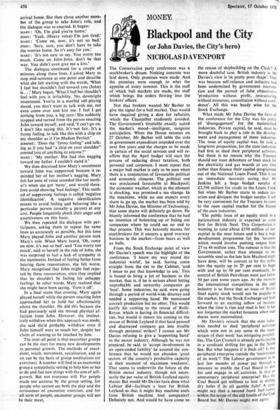 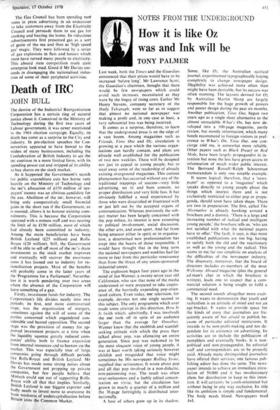 Blackpool and the City

The Conservative party conference was a stockbroker's dream. Nothing concrete was laid down. Only promises were made. And the promises were enough to whet the appetite of every investor. This is the stuff of which bull markets are made, the stuff which brings the orders flowing into the brokers' offices.

Not that brokers wanted Mr Barber to give the signal for a bull market. That would have required giving a date for reflation, which the Chancellor studiously avoided. The Government's timetable exactly suited the market's mood—intelligent, sanguine anticipation. When the House resumes on 27 October, Mr Barber will table the cuts in government expenditure intended over the next five years and the charges to be made in certain of the social services and will re- affirm that the April budget will start the process of reducing direct taxation, both personal and corporate. I must repeat that a major bull market is only to be seen when there is a conjunction of favourable political and economic climates. The political one was proclaimed favourable at Blackpool; the economic weather, which at the nibment is shocking, was promised a sea change. In the meantime, while no one expects every share to go up, the market has been told by Mr John Davies, the Minister of Technology, that some shares will definitely go down. He bluntly informed the conference that he had no intention of bolstering up or baling out. companies where he could see no end to that process. This was heavenly manna for stockbrokers for it ensures a good two-way business in the market—from bears as well as bulls.

From the Stock Exchange point of view Mr Davies's speech was the highlight of the conference. 'I know my way round the industrial world', he said, having come straight from the cm to the Cabinet, 'and I mean to put that knowledge to use' This is bound to bring a lot of business to the market, that is, if he is serious about letting unprofitable and unworthy companies go 'bust'. Some industries, he said, were going through a period of world-wide disarray and needed a supporting hand. He mentioned aircraft production but no other. This would justify his coming to the rescue of Rolls- Royce, which is having its financial difficul- ties, but would it ensure his coming to the rescue of British Leyland if that bard-pressed and disarrayed company got into trouble through perennial strikes? I cannot see Mr Davies refusing to give a 'supporting hand' to the motor industry. Although he was not prepared, he said, to 'accept involvement in an open-ended liability' he assured the con- ference that he would not abandon 'great sectors of the country's productive capacity at their moment of maximum weakness'. That seems to underwrite the future of the British motor industry, though not neces- sarily the par value of British Leyland equity shares. But would Mr Davies have done what Labour did—facilitate a loan for British Leyland so that it might buy machine tools from British machine tool companies? Definitely not. And would he have come to

the rescue of shipbuilding on the Clyde? A more doubtful case. British industry in Mr

Davies's view is 'in pretty poor shape'. That was because self-reliance and initiative had been undermined by government interven- tion and the pursuit of false objectives-. 'production without profit, restructuring without resources, consultation without confi- dence'. All this was heady wine for the Stock Exchange.

What made Mr John Davies the hero of the conference for the City was his policy of 'disengagement' for the nationalised industries. Private capital, he said, must be brought back to play a role in the develop.

ment and management of these industries, The issue of equity capital was, he said, a long-term proposition, for the state industries had first to shed their peripheral activities,

out of the National Loans Fund. This is not an immediate necessity • seeing that Mr Jenkins left a huge budget surplus of £2,598 million for credit to the Loans Fund, but when Mr Barber starts to reduce tax- ation and dissipate the budget surplus it will be very convenient for the Treasury to come to the open capital market for the finance of the state industries.

The public issue of an equity stock in a nationalised industry is expected to come first for British Steel. This Corporation is wanting to raise about £150 million of new capital in the near future and it has a huge development programme foi the 'seventies which would involve pushing output from 27 to 44 million tons. The rumour is that the Government, rather than attempt to un- scramble steel as the late Iain Macleod might ' have done, will be content to let the public into the equity up to 25 per cent to begin with and up to 50 per cent eventually. Its control of British Petroleum went just below 50 per cent some years ago. At the moment the international competition in the steel industry is so fierce that an issue of British Steel equity stock would not be popular in the market, but the Stock Exchange can look forward to an exciting inflow of business when the time is ripe and steel is hot. It has not forgotten the market bonanza when steel shares were nationalised.

Mr Davies's remark that the state indus- tries needed to shed 'peripheral activities which were not in any sense in the main• stream of their work' has intriguing possibili- ties. The Gas Council is already participating in a syndicate drilling for gas in the North Sea. But what happens if it finds oil? Is that peripheral enterprise outside the 'mainstream of its work'? The Labour government in its last few months of power put through a measure to enable the Coal Board to drill for. and engage in oil activities. Is that an unnecessary peripheral enterprise? Has the Coal Board got millions to lose in drilling dry holes if its oil gamble fails? A cynic might say that a second fossil fuel comes within the scope of the old fossils of the Dal Board but Mr Davies might not agree.

The Gas Council has been spending vast sums in press advertising in an endeavour to take customers away from the Electricity Council and persuade them to use gas for cooking and heating the home. Its ridiculous advertisements first presented gas as a sort of genie of the sea and then as 'high speed gas' magic. They were followed by a series of gas explosions in flats and houses which must have turned many people to electricity. This absurd state competition made state enterprise look mad. Good if Mr Davies suc- ceeds in disengaging the nationalised indus- tries of some of their peripheral activities.