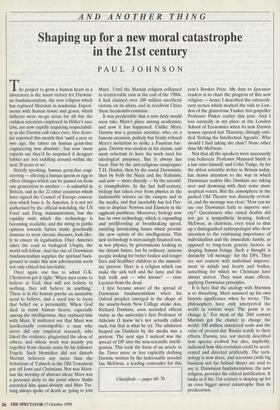 Shaping up for a new moral catastrophe in the 21st century

Strictly speaking, human germ-line engi- neering — altering a human sperm or egg to effect changes which can be passed on from one generation to another — is unlawful in Britain, and in the 22 other countries which have signed the Council of Europe conven- tion which bans it. In America, it is not yet authorised by the official watchdog, the US Food and Drug Administration, but the rapidity with which the technology is becoming available, and the swing in public opinion towards babies made genetically immune to most chronic diseases, look like- ly to ensure its legalisation. Once America takes the road to biological Utopia, the world will follow. And the rise of Darwinian fundamentalism supplies the spiritual back- ground to make this new adventurism seem not only ethical but inevitable.

Once again one has to admit G.K. Chesterton got it right: 'When men cease to believe in God, they will not believe in nothing, they will believe in anything.' There is in the human psyche an insatiable need to believe, and a need too to focus that belief on a personality. When God died in many human hearts, especially among the intelligentsia, they replaced him with Marx. It mattered not that Marx was intellectually contemptible: a man who never did any empirical research, who faked the evidence, plagiarised the ideas of others, and whose work was mainly put together from chaotic notes by his follower Engels. Such blemishes did not disturb Marxist believers any more than the behaviour of Yahweh in the Old Testament put off Jews and Christians. Nor was Marx- ism the worship Of abstract ideas: Marx was a personal deity to the point where Stalin accorded him quasi-divinity and Mao Tse- tung always spoke of death as 'going to join Marx'. Until the Marxist religion collapsed in irretrievable ruin at the end of the 1980s, it had claimed over 100 million sacrificial victims on its altars, and in recidivist China these hecatombs continue.

It was predictable that a new deity would soon take Marx's place among academics, and now it has happened. Unlike Marx, Darwin was a genuine scientist, who, on a famous occasion, politely but firmly refused Marx's invitation to strike a Faustian bar- gain. Darwin was modest in his claims, and most reluctant to have his work used for ideological purposes. But it always has been: first by the anti-religious campaigner T.H. Huxley, then by the social Darwinists, then by both the Nazis and the Stalinists, and now — more directly — by the scientif- ic triumphalists. In the last half-century, biology has taken over from physics as the fashionable science on the campus and in the media, and that inevitably has led Dar- win to displace Newton and Einstein in the egghead pantheon. Moreover, biology now has its own technology, which is expanding and proliferating at breathtaking speed, emitting intoxicating fumes which provide the new opium of the intelligentsia. This new technology is increasingly financed not, as was physics, by governments looking to the distant future, but by ordinary, anxious people looking for better bodies and longer lives and healthier children in the immedi- ate present. Here is a religion which can make the sick well and the lame and the halt walk and — who knows? — raise Lazarus from the dead.

I first became aware of the spread of Darwinian fundamentalism when his Oxford prophet emerged in the shape of the smarty-boots New College stinks don, Richard Dawkins, soon accorded official status as the university's first Professor of Atheism (I know he's not actually called such, but that is what he is). The adulation heaped on Dawkers by the media was a portent. The next sign I noticed was the spread of DF into the non-scientific intelli- gentsia. This took the form of an article in the Times more or less explicitly deifying Darwin, written by the fashionable novelist Ian McEwan, a leading contender for this year's Booker Prize. My duty to Spectator readers is to chart the progress of this new religion — hence I described the extraordi- nary scenes which marked the visit to Lon- don of the glamorous Yankee hot-gospeller Professor Pinker earlier this year. And I was naturally in my place at the London School of Economics when its new Darwin season opened last Thursday, fittingly enti- tled 'Setting the Intellectual Agenda'. Who should I find taking the chair? None other than Mr McEwan.

Not that all the speakers were necessarily true believers. Professor Maynard Smith is a law unto himself, and Colin Tudge, by far the ablest scientific writer in Britain today, has drawn attention to the way in which Darwinian zealots like Dawkins are taking over and drowning with their noise more sceptical voices. But the atmosphere in the packed Old Theatre was distinctly revival- ist, and the message was clear: 'How can we use our Darwinian faith to improve soci- ety?' Questioners who raised doubts did not get a sympathetic hearing. Indeed, McEwan, as chairman, even tried to shut up a distinguished anthropologist who drew attention to the continuing importance of individualism and the immediate family, as opposed to long-term genetic factors, in shaping human beings. Such a thought is distinctly 'off message' for the DFs. They are not content with individual improve- ment in minds and hearts and bodies, something for which we Christians have always striven. They want mass effects, applying Darwinian principles.

It is here that the analogy with Marxism is so disturbing. Marx summed up his own historic significance when he wrote, 'The philosophers have only interpreted the world in various ways. The point is to change it.' For most of the 20th century Marxists got the chance to change the world: 100 million murdered souls and the ruins of present-day Russia testify to their efforts. Darwin, too, not merely described how species evolved but also, implicitly, indicated how this evolution could be accel- erated and directed artificially. The tech- nology is now there, and scientists (with big business not far behind them) are avid to use it. Darwinian fundamentalism, the new religion, provides the ethical justification. It looks as if the 21st century is shaping up for an even bigger moral catastrophe than its predecessor.