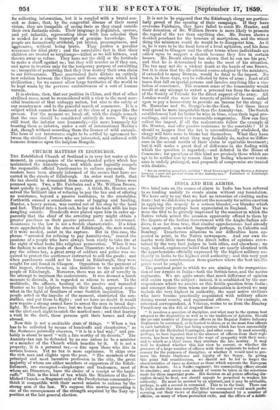 Tai Established Church of Scotland is in very hot water at this moment, in consequence of the wrong-headed policy which has Maintained the Annuity-tax, and which now logically compels the responsible official functionaries to enforce payment. Our readers have been already informed of the scenes that have oc- curred in the streets of Edinburgh. An order went forth, that the tax should be demanded from certain persons. Three were pounced upon. Two, a Mr. Fairbairn and a Mr. William Brown, went quietly to gaol, rather than pay. A third, Mr. Hunter, con- ceived the brilliant idea of refusing to pay the tax and of offering no resistance, beyond a passive resistance, to the constables. Forthwith ensued a scandalous scene of lugging and hauling. Hunter, a heavy person, was carried out of his shop by the head and feet. Thrust into a hack cab, he lay on his back with his legs dangling outside. Handcuffs were placed upon him in order ap- parently that the chief of the arresting party might obtain a greater purchase on their passive prisoner. A mob intervened. Resistance to the law is not a Scotch characteristic. If a felon were apprehended in the streets of Edinburgh, the mob would, if it were needed, assist in the capture. But in this ease, the phrase " arrested for refusing to pay Annuity-tax," roused the passions of a people who have always been ready to take fire at the sight of what looks like religious persecution. When it was the fashion to seize the goods of those Dissenters who refused to pay the odious tax, a great array of soldiers and police was re- quired to protect the auctioneer instructed to sell the goods ; and when purchasers could not be found in Edinburgh, they were sought for and found in Glasgow. Opposition to the payment of this impost, therefore, is an idea familiar to the minds of the people of Edinburgh. Moreover, there was an air of novelty in the attempt to imprison the malcontents. It was deemed a harsh measure to distrain, it is regarded as odious to arrest. To the multitude, the officers, hauling at the passive and manacled Hunter as he lay helpless beneath their hands, appeared some- what in the light of familiars of some Scottish inquisition. The people acted on the impulse of the moment, obstructed the con- stables, and put them to flight ; and we have no doubt it would now require a strong armed force to arrest the man in broad day- light. lie therefore goes free; but we hear that the constables are on the alert each night to catch the marked men ; and that fearing a visit in the dark, these persons quit their homes and sleep abroad.

Now this is not a creditable state of things. -" When a tax has to be collected by means of handcuffs and claspknives' " as the Scotsman pointedly observes, -" it is in a bad way," and pro- bably is about to meet "with a fate worthy of its deserts." The Annuity-tax can be defended by no one unless he be a minister or a member of the Church which benefits by it. It is not a property, it is a personal tax,—a fine -upon those who live in certain houses. Yet no tax is more capricious. It skips over the rich man and alights upon the poor. " The members of the principal and most lucrative profession in the city, the great majority of whom are either members or supporters of the Estab- lishment, are exempted—shopkeepers and tradesmen, most of whom are Dissenters, have the choice of a receipt or the hand- cuffs." This is the kind of tax which the Ministers of the Es- blished Church—a fragment only of the Presbyterian community— think it compatible with their sacred mission to enforce by the strong arm of the law. We suppose this unwise proceeding is one of the consequences of the strength acquired by the Tory op- position at the last general election. It is not to be supposed that the Edinburgh clergy. are particu- larly proud of the opening of their campaign. If they have overcome Fairbairn, they have failed to catch Mr. Hunter, and their detention of Mr. William Brown is more likely to promote the repeal of the tax than anything else. Mr. Brown shows a decided penchant for the honours of martyrdom, and the wisest thing the ministers could do would be to disappoint him. As it is, he is sure to be the local hero of a local agitation, and his fame will spread to Glasgow and the other towns where individuals are called upon to support a church because they live in certain houses. Mr. Brown already has shown that he can use his pen,* and that he is determined to make the most of his situation. The tax may not die a violent death at the hands of one Brown, but it is clear that the ill-advised course adopted by the ministers, if extended to many Browns, would be fatal to the impost. No taxes, in these days, can be collected by force of arms ; least of all taxes that fall on special persons and involve anything like a vio- lation of conscience. The common sense of the community would revolt at any attempt to extort a personal tax from the members of the Society of Friends for the direct support of the army. All London would rise were the tenants of particular houses called upon to pay a house-duty to provide an income for the clergy of St. Barnabas and St. George's-in-the-East. Yet these taxes would not be more inequitable than the Annuity-tax. The Scotch establishment had far better be wise in time, cease their legal pro- ceedings, and consent to a reasonable compromise. How can they collect the impost, if all the malcontents fallow the example of Mr. Hunter, and offer passive resistance to the constable ? If it should so happen that the tax is unconditionally abolished, the clergy will have none to blame but themselves. What they have foolishly done, and what they may foolishly do, makes no differ- ence in the actual merits. of their claim to equitable treatment; but it will make a great deal of difference in the feeling with which the question is regarded,—and debated in the House of Commons ; for questions of this kind are precisely those which are apt to be settled less by reason than by feeling whenever resist- ance is unduly prolonged, and proposals of compromise are treated with disdain.

° See an amusing pamphlet, entitled " Dead Brown and Living Brown,a dialcene between a past and present victim of the Annuity tax." Published at Edinburgh for William Brown.