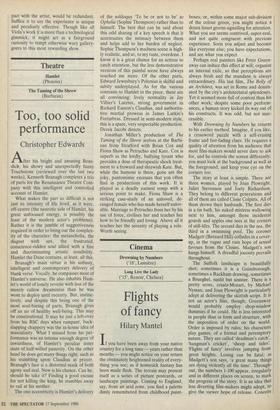 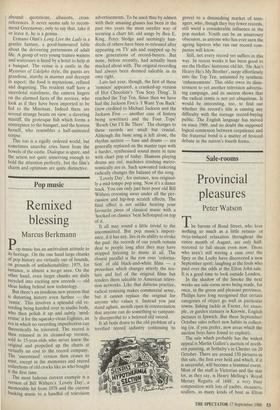 If you have been away from your native country for a long time — years rather than months — you might notice on your return the obstinately heightened reality of every- thing you see; as if homesick fantasy has been made flesh. The terrain may present itself as a series of picture postcards, or landscape paintings. Coming to England, say, from an arid zone, you find a palette dimly remembered from childhood paint- boxes; or, within some major sub-division of the colour green, you might notice a dozen lesser greens signalling for attention.

What you see seems contrived, super-real, and not quite congruent with previous experience. Soon you adjust and become like everyone else; you have expectations, and see what you expect.

Perhaps real painters like Peter Green- away can induce this effect at will; organise an internal exile, so that perceptions are always fresh and the mundane, is always extraordinary. His last film, The Belly of an Architect, was set in Rome and domin- ated by the city's architectural splendours. Yet it seemed more full of content than his other work; despite some poor perform- ances, a human story kicked its way out of his constructs: It was odd, but not inac- cessible.

With Drowning by Numbers he returns to his earlier method. Imagine, if you like, a crossword puzzle with a self-erasing frame and fast-fading clues. He requires a quality of attention from his audience that most film-makers would never dare to ask for, and he Controls the screen differently: you must look at the background as well as the foreground, and keep your eye on the corners too.

The story at least is simple. There are three women, played by Joan Plowright, Juliet Stevenson and Joely Richardson.

They belong to different generations and all of them are called Cissie Colpitts. All of them drown their husbands. The first dies in a tin bath, his naked mistress wallowing next to him, amongst those incidental gourds and apples one sees at the corners of still-lifes. The second dies in the sea, the third in a swimming pool. The coroner Madgett (Bernard Hill) colludes in a cover- up, in the vague and vain hope of sexual favours from the Cissies. Madgett's son hangs himself. A dreadful jocosity prevails throughout.

The Suffolk landscape is beautifully shot; sometimes it is a Gainsborough, sometimes a Rackham drawing, sometimes a Brueghel, sunlit but sinister. There is a pretty score, ersatz-Mozart, by Michael Nyman, and Joan Plowright is particularly adept at delivering the skittish script. It is not an actor's film, though; Greenaway would probably employ shop-window dummies if he could. He is less interested in people than in form and structure, with the imposition of order on the world. Order is imposed by rules; his characters play games, of a formal and peremptory nature. They are called `deadman's catch', `hangman's cricket', 'sheep and tides'.

`Flights of fancy' involves jumping from great heights. Losing can be fatal; as Madgett's son says, 'a great many things are dying violently all the time'. Through- out, the numbers 1-100 appear, irregularly and in different places on screen, to mark the progress of the story. It is an idea that less diverting film-makers might adopt, to give the viewer hope of release. Conceits abound: quotations, allusions, cross- references. It never seems safe to recom- mend Greenaway; only to say that, take it or leave it, he is a genius.

Ermano Olmi's Long Live the Lady is a gentler fantasy, a good-humoured fable about the devouring pretensions of adult life. A group of very young trainee waiters and waitresses is hired by a hotel to help at a banquet. The venue is a castle in the Mysteries of Udolpho style; the guests are grandiose, starchy in manner and decrepit in aspect; the food is mysterious, refined and disgusting. The resident staff have a sacerdotal stateliness; the camera lingers on the alarmed faces of the novices, who look as if they have been imported to be fed to the Minotaur. Indeed there are several strange beasts on view: a slavering mastiff, the grotesque fish which forms a centrepiece to the banquet, and the hostess herself, who resembles a half-animated corpse.

This too is a rigidly ordered world; but sometimes anarchic cries burst from the bowels of the castle. Dialogue is spare, and the action not quite unnerving enough to hold the attention perfectly, but the film's charm and optimism are quite distinctive.