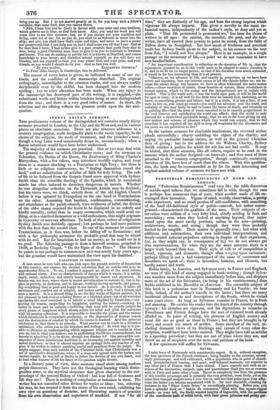 THIS posthumous volume of the distinguished wit contains nearly thirty sermons preached in London, to the City and the West end, and in various places on charitable occasions. There are also nineteen addresses to a country congregation, made designedly plain to the rustic capacity, in the choice of the subjects, the mode of treatment, and the preacher's tone; though a long Latin word occasionally drops in, unconsciously, when a Saxon substitute would have been better understood.

The majority of the sermons are practical. One or two may deal with the general evidence on which Christianity rests ; and the sermons on Toleration, the Duties of the Queen, the Anniversary of King Charles's Martyrdom, with a few others, may introduce worldly topics, and treat them in a manner shocking to a Tractarian or high Tory : but there is little or no religious controversy, no " dealing damnation round the land," and no substitution of articles of faith for holy living. The rule of life to be deduced from the Gospels found more approval with Sydney Smith than the scientific theology of the Epistles, which in casuistical minds has often induced to doctrines dangerous to morals. Whether he was altogether orthodox on the Thirteenth Article may be doubted ; but his views were, we think, strictly those of the old English Church before it was agitated by Evangelism on the one hand or Tractarianism on the other. Assuming that baptism, confirmation, communicating, and attendance at the parish-church, were evidences oebelief, the divines of the older stamp required the fruits to be displayed in an orderly and kindly morality, rather than in empty ceremonies, which could avail no- thing, or in a starched demeanour or a wild enthusiasm, that might originate in hypocrisy or nervous affections. To both of these orders of religionists Sydney Smith was decidedly opposed; but perhaps he had more patience with the first than the second class. In one of his sermons he examines Tractarianism, as it then was, before its falling off to Romanism; and with a fair philosophy estimates the probable good that may be mixed with its evil. But for fanaticism he had no mercy, as he could see in it no good. The following passage is from a farewell sermon, preached in 1809, at Berkeley Chapel, " On the Signs of the Times." The likeness he paints is not perhaps so common now as it was nearly forty years ago ; but the preacher would have maintained the view upon his deathbed.

A man must be very bold who can look upon the present activity of fanaticism in this country, and express his decided conviction that no serious evil is to be apprehended from it. fo me, I confess it appears an object of the most serious and rational alarm. I see no characteristic of danger which it wants: it is subtle, -rapid, secret, seductive, and utterly inexpugnable by reason and argument. It breaks out, not here, where there is reason and education to restrain it; but it be- gins in poverty, in darkness, and in disease, working its way upwards, and poison- ing everything that is good and happy in our nature. As it ascends, it takes all sweetness and comfort out of religion, and makes earth a hell, God a tyrant, and man a wretch. It is a dismal thing to see the fair works of Nature marred; it is not pleasant to look even at a fading flower or a blighted plant ; but of all wretched spectacles the most wretched is to behold a mind blighted by fanaticism,—sus pecting its reason, suspecting its happiness, panting for misery,--seeking for safety in tears and in sadness,—believing that man will be cruelly judged for every gleam of happiness which shoots across his mind and gilds his existence with its passing splendour. It is impossible to describe the gloom and the misery which fanaticism is everywhere producing, or the degradation of human reason and the destruction of comfort by which its course is marked. And the grievous misfortune is, that there is no remedy. What answer can be made to a mistaken enthusiast, who refers you to his impulses and feelings? In what way is it pos- sthle to illumine an understanding which supposes religion not to consist in what you do, but in what you believe; not in performing the Divine commandment, but merely in admitting it to be divine, though you disobey it? One perceptible con- sequence of these mischievous doctrines is, an increasing cry against morality and moral doctrines; so that it almost requires an apology from any teacher of rail gion if he wishes to enforce anything useful and practical from the pulpit. We might suppose, from such notions of the Christian faith, that Christianity was a set of speculative disquisitions, where, if a man only agreed with the barren and useless results, he was left at liberty to follow the devices of his own heart, and to lead what manner of life his fancy or his passions might dictate.

In a literary point of view, these sermons stand alone among modern pulpit discourses. They have not the theological learning which distin- guishes some, or the mystical eloquence that gives character to the out- pourings of the present Bishop of Oxford : but how full of freshness and life they are! There is nothing of compilation or imitation in them. The writer has not consulted other divines for topics or ideas ; but, selecting his text, he has treated it from the stores of his own mind, exhibiting his own view on questions of doctrine, and illustrating matters of practice from his own observation and experience of mankind. If not "for all time," they are distinctly of his age, and bear the strong impress which vigorous life always imparts. This gives a novelty to the most ex- hausted topics, independently of the author's style, so deep and yet so plain. " That life protracted is protracted wo," has been the theme of writers in all ages : the satirist, the moralist, the poet, and the tale- writer, have all exerted their powers to point its moral, from the fable of Tithon down to Nourjahad. Yet how much of freshness and practical truth has Sydney Smith given to the subject, in his sermon on the teat from Job, " I would not live always." Here is an example, in a single passage on the monotony of life,—a point we do not remember to have seen handled before.

" An important consideration in reflecting on the duration of life is, that the enjoyments granted to us in this world seem to be adapted to man's duration in it, and to be fit for no longer period; so that if his duration were much extended, it would be far less interesting. than it is at present "Observe, as we advance in life, and exactly in proportion as we have been active and inquiring, how our interest ceases in all the objects before us; not be.. cause the senses decay, but because we have so often witnessed the same scenes before,—those exertions of talent, those beauties of nature, those revolutions in human opinion, which to the young and the inexperienced are so replete with wonder. This is the world now, it was the world ages past, it will be the world for ages to come: it is all well for the little time we remain in it, hastening, as we know, to something greater and better; but it is a circle, it is not a line; if you were to live on, you must go round—you could not advance: and the truth and certainty of this may fairly be said to lessen the terror of death, and reconcile us to quitting life—that the term of years conceded to us is exactly proportioned to the real interest and satisfaction the world can afford; that tho world is only planned for a short-lived perishable being; that we are so far from giving up any new system and scheme of pleasure which this world can supply, that we feel conscious it has required all our skill to keep off weariness for the threescore and ten years we are permitted to live."

In the various sermons for charitable institutions, the reverend author pleads successfully ; clearly unfolding the object of the charity, and urging its particular human claims, as well as the general Christian duty of giving: but in the address for the Widows Charity, Sydney Smith reaches a pathos for which the wit has not had credit. It may be hinted, that these sermons, like all others, require to be read in the manner which the author designed—at intervals; and that most of those preached to the "country congregation," though continually containing sketches of life, have less of reach than the others. With this qualifica- tion, the book may be recommended as by far the most interesting and original-minded volume of sermons we have met with.