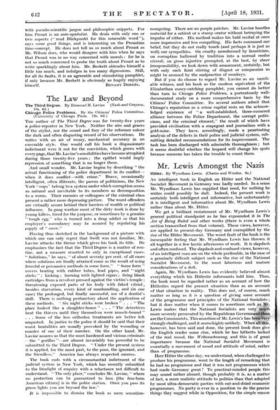 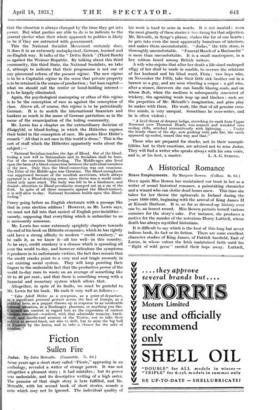 Mr. Lewis Amongst the Nazis Hitler. By Wyndham Lewis. (Chatto

We get a brilliant restatement of Mr. Wyndham Lewis's general political standpoint as he has expounded it in The Art of Being Ruled and other works (there is even a whole section transcribed from that volume). These views, however, are applied to present-day Germany and exemplified by the rise of the Hitler Movement. The worst fault of the book is the inescapable feeling that Mr. Wyndham Lewis has thrown it all together in a few hectic afternoons of work. It is slapdash and often confused. The slapdash and confused views, however, of an intelligent man are on the whole preferable, in the case of a genuinely difficult subject such as the rise of the National Socialist Movement, to the most laborious and mature considerations of a dolt.

Again, Mr. Wyndham Lewis has evidently believed almost everything which his Hitlerite informants told him. Thus, the book must be regarded rather as an account of how the Hitlerites regard the present situation than as an account of that situation in reality. This does not, of course, much matter so long as it is a question of giving some account

of the programme and principles of the National Socialists ; but it does matter when it comes to assertions such as Mi.

Lewis makes that the National Socialists are very much more severely persecuted by the Republican Government than are the Communists. This assertion of Mr. Lewis's has been every strongly challenged, and it seems highly unlikely. When all this, however, has been said and done, the present book does give the English reader some clue, which he has hitherto lacked of the real mood, the Weltanschauung, and this is of great importance because the National Socialist Movement is essentially a movement of mood and attitude of mind, rather than of programme.

Herr Hitler the other day, we understand, when challenged to produce his programme, went to the length of remarking that he had no programme and that it was not programmes which had made Germany great ! To practical-minded people this may sound rather absurd, though probably it is, as a matter of fact, a more realistic attitude to politics than that adopted by most ultra-democratic parties with cut-and-dried economic programmes. No party is ever in a position to do the precise things they suggest while in Opposition, for the simple reason

that the situation is always changed by the time they get into power. But what parties are able to do is to indicate to the general elector what their whole approach to politics is likely to be if "they are entrusted with government.'

. This the National Socialist Movenient certainly does. It does it in an extremely metaphysical,. German, learned and un-English way. It talks of the " Dritte Reich " (Third Reich) as against the Weimar Republic. By talking about this third community, this third State, the National Socialists, we take it, attempt to indicate that their programme is not one of

any piebemeal reform of the present regime. The new reginie is to be a Capitaliit regime in the sense that private property is to be retained in the means of production ; but loan capital—. what we should call the rentier or bond-holding interest—

is to. be largely eliminated.

Gerthan. It is to scotch the international financiers and bankers as much in the name of German patriotism as in the name of the emancipation of the toiling community,. Mr. Lewis has a chapter on the extraordinary doctrine of

Blutgefidd, or blood-feeling, in which the Hitlerites express their belief in the conception of race. He quotes Herr Hitler's

remark " All that is not race in this world is dross." This is the sort of stuff which the Hitlerites' apparently write about the subject :-

" National,Socialism teaches the Age of Blood. Out of the blood- feeling, a new will to Nationalism and to Socialism shall be born. Out of the conscious blood-feeling. The Middle-ages also lived upon the basis of a blood-connection between the individual members of the ittee. Only. then the blood-connection was not conscious. The Ethic of the Middle-ages was Christian. The Blood-metaphysic was suppressed because of the monkish asceticism,- which always operated in a Blood-denying sense, since theirs was a world estab- lished only upon mind. The body was felt to be a hindrance, and denied-Hattention to' Blood-peculiarity stamped out as a sin Of the flesh ' In spite of - all. these measures against the Blood-instinct, it is: still alive to-day. National Socialism builds upon this Blood- feeling."

Fancy going before an English electorate with a passage like that in your election address ! However, as Mr. Lewis says, we must not fall into that easiest of English provincialities- namely, supposing that everything which is unfamiliar to us is necessarily nonsense.

Mr. Lewis has some extremely sprightly chapters towards the end of his book on Hitlerite economics, which he has rightly said have a strong affinity to modern " credit crankery," as he calls it, as we know it—all too well—in this country. As he says, credit crankery is a. disease which is spreading all over the world to-day, and however ridiculous the symptoms it produces in its unfortunate victims, the fact does remain that the credit cranks point to a very real and tragic anomaly in our existing social system. They will keep pointing their fingers to the undeniable fact that the productive power of the world to-day runs to waste on an average of something like 30 to 40 per cent., and that there is something wrong with a financial and monetary system which allows that.

Altogether, in spite of its faults, we must be grateful to Mr. Lewis for his book.. He ends it very well as follows :—

- Take Adolf Hitler as a symptom, as a point-of-departure, as a significant personal gesture across the face of Europe, as a political hero, as a puppet thrown up in response to an intolerable internal -ifituation, as a Boulangist phantom, or anything you like. I myself am content to regard him as the expression of current

ierman manhood—resolved, with that admirable tenacity, hardi- hood, and intellectual acumen of the Teuton, not to take their politica at second-hand, not also to drift, but to seize the big bull of Finance by the horns, and to take a chance for the sake of freedom."