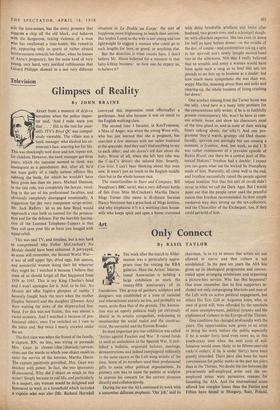 By JOHN BRAINE APART from a moment of déjà-vu boredom when, the police inspec- tor said, 'And I must warn you that . . (fill in the rest for your- self), ITV's Boyd QC was compul- sively viewable. The villain was a bank manager who slashed his ex- mistress's face, scarring her for life. This was shockingly well done and not, repeat not, for children. However, the bank manager got three years, which the narrator seemed to think was inadequate as a punishment. But, after all, he'd not been guilty of a really serious offence like robbing the bank, for which he wouldn't have been given less than six years. Michael Denison, in the title role, was completely the lawyer, revel- ling in the use of his professional faculties, and obviously completely disengaged emotionally. A suggestion for the very competent script-writer, Mr. Jack Raffery : let us see how Boyd would approach a case both as counsel for the prosecu- tion and for the defence. For the horrible fascina- tion of the Learned Telephone-Tappers is that they will save your life or have you hanged with equal relish.

This was real TV, and timeless; but it was hard to comprehend why Esther McCracken's No Medals should have been exhumed. It portrayed, as some will remember, the Second World War— a war of stiff upper lips, dried eggs, fish queues, and wonderful women doing their bit wherever they might be. I watched it because I believe that none of us should forget all that happened from 1939 to 1945. This is my King Charles's head and I won't apologise for it. And, to be fair, No Medals did offer fugitive glimpses of reality. I honestly fought back the tears when the mother (Sophie Stewart) and the daughter (Doreen Aris) were waiting for news of the shipwrecked hus- band. For this was not fiction; this was almost a racial memory. And I watched it because of pro- fessional ethics; once I've switched on I view to the bitter end. But twice I nearly crawled under the set.

The first time was when the friend of the family, a captain, RN, no less, was trying to persuade Mrs. Gaye (a cleaner /char /charlady/servant; cross out the words to which you object most) to enter the service of the heroine, Martha Dacre. The captain ,Rositively grovelled; Mrs. Gaye was insolent with power. In fact, she was ignorantly ill-mannered. Why did 1 object so much to this scene? Simply because in real life, and particularly in a seaport, any woman would be delighted and honoured to work in a household which included a captain who was also (Mr. Richard Hurndall conveyed this impression most effectually) a gentleman. And also because it was an insult to the English working class.

The second time I became, in KenTynanese, a Man of Anger, was when the young Wren wife, who has just learned that she is pregnant, has snatched a few minutes with her sailor husband at the quayside. And they can't find anything to say to each other; and she doesn't tell him about the baby. Worst of all, when she left him (she was the C-in-C's driver) she saluted him. Smartly. Con brio. I can't bear thinking about this even now. It wasn't just an insult to the English middle class but to the whole human race.

The materfamilias in Starr and Company, Bill Naughton's BBC serial, was a very different kettle of fish from Miss McCracken's Martha Dacre. Megs Turner (the name is ill-chosen because Nancy Nevinson has a great look of Megs Jenkins, and why emphasise it?) is a working-class house- wife who keeps spick and span a home crammed with shiny breakable artefacts and looks after husband, two grown sons, and a schoolgirl daugh- ter with effortless expertise. She can even sit down for half an hour before dinner—in the middle of the day, of course—and contemplate taking a spin in her spivvish son's newly bought second-hand van in the afternoon. Not that I really believed that so sensible and sonsy a woman would have been quite such a mug as to lend this son ten pounds to set him up in business as a dealer; but how much more sympathetic she was than wet, soppy Martha, moaning about flues and sinks and clearing-up, the whole business of living crushing her down !

One artefact missing from the Turner home was the telly. (And here is a nasty little problem for the conscientious telly writer; if he is to faithfully present contemporary life, won't he have to com- mit artistic incest and show his characters most of the time glued to, and in most of their waking hours talking about, the telly?) And one pro- gramme they'd watch, grumpy old Dad shame- facedly, spivvish son jeeringly but not missing a moment, is Ivanhoe. And, last week, ,so did 1. It was rather reminiscent of a previous episode of Robin Hood; can there be a central pool of His- torical Hokum? Ivanhoe had a double; I expect you can guess what use the wicked Sir Humphrey made of him. Naturally, all came well in the end, and Ivanhoe successfully raised the people against unjust taxation. Not that this sort of revolt didn't occur in what we call the Dark Ages. But I would point out that the people never used the peaceful means that Ivanhoe recommended. In their simple medimval way they strung up the tax-collectors; and the Chancellor of the Exchequer, too, if they could get hold of him.