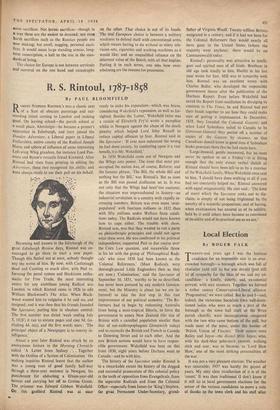 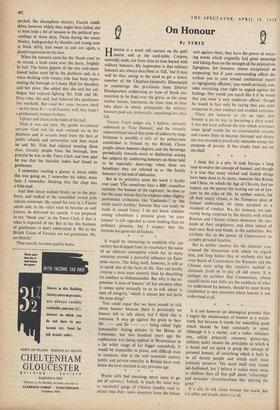 By ROGER FALK WEN1Y-ONE years ago I was the hesitant

candidate for an impossible seat in an over- crowded borough—a borough which was full of character (add still is) but was devoid (and still is) of sympathy for the likes of me and my co- candidate : a kindly, elderly, sad, ex-colonial servant, with nice manners. Together we formed a rather uneasy Conservative-Liberal alliance. `Progressives,' we were called. But he and I—and, indeed, the victorious Socialists (two well-inten- tioned ladies who were as much a part of the borough as the town hall itself or the Wren parish church), were inconspicuous compared with the two who came bottom of the poll, but made most of the noise, under the banner of `British Union of Fascists.' Their names were Bailey and Joyce—the dismal little Joyce, who, with his dark-blue polo-neck' sweater, walking stick and scar, was to become, as 'Lord Haw Haw,' one of the most striking personalities of the war.

It was not a very pleasant election. The weather was miserable; 1937 was hardly the gayest of years. My only clear recollection of it is of the `count.' It was then traditional (1 don't know if it still is) in local government elections for the senior of the various candidates to move a vote of thanks to the town clerk and his staff after packed, the atmosphere electric; Fascist candi- dates, however widely they might have failed, did at least lend a bit of tension to the political pro- ceedings of those days. Twice during the count Mosley, bodyguarded by blondes and young men in black shirts, had swept in and out again, a glazed expression on his face.

When the moment came for the `thank-yous' to be orated, a hush came over the dusty, brightly lit hall. The better known of the two well-inten- tioned ladies went up to the platform and, in a voice thrilling with victory (she had been repre- senting the borough at County Hall for decades), said her piece. She added that she and her col- league had enjoyed fighting Mr. Falk and Mr. Price who, she said, had behaved like gentlemen (we smirked). But—and her voice became shrill —as for those b s of Fascists, well, they hadn't a gentlemanly instinct in them.

Uproar and chaos in the body of the hall.

Then it was our turn. My gentle ex-colonial servant—God rest his soul—minced on to the platform and in accents bred from the best of public schools and universities said how much he and Mr. Falk had enjoyed meeting those dear, friendly people from the borough, how grateful he was to the Town Clerk and how glad he was that the Socialist ladies had found us gentlemen.

I remember stealing a glance at Joyce while this was going on. I remember his white, tense face. I remember thinking that the chap was a little mad.

And then Joyce walked firmly on to the plat- form, and looked at the assembled crowd with infinite contempt. He raised his arm in a Fascist salute and, in the voice soon to become so well known, he delivered his speech. am prepared to say "thank you" to the Town Clerk if that is what is expected of me. But as for this business of gentlemen—I don't understand it. We in the British Union of Fascists are not gentlemen. We are British.'

That was all; we went quietly home.