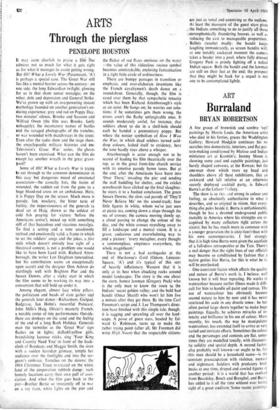 Through the pierglass ARTS

It may seem churlish to praise a film One admires not so much for what it gets right as for what it manages to avoid getting wrong. But Oh! What a Lovely War (Paramount, 'A') is perhaps a special case. The Great War still lies like a mental barrier across the century : on one side, the long Edwardian twilight, glowing for us in that sham sunset nostalgia; on the other, dole and depression and General Strike. We've grown up with an overpowering instant mythology founded on another generation's en- during experience; grey and red on Poppy Day, two minutes' silence, Brooke and Sassoon and Wilfred Owen (the film uses Brooke, fairly unhappily), the incantatory names of battles and the ravaged photographs of the trenches, or war wounded with match-trays in the street. Even after the radio show and the stage show, the encyclopaedic military histories and BBC Television's Great War series, the ghosts haven't been exorcised. What can the film do except lay another wreath in the great grave- yard?

Seme of Oh! What a Lovely War is trying to cut through to the common denominator in this easy but dangerous mood of emotional association—the casualty lists, the trains of wounded, the sudden cut from the guns to, a huge blood-red cross on an ambulance. Heie, it is Poppy Day on the screen. Much more is parody, fun, mockery, the bitter taste of futility, the imperviousness of the generals (a dead set at Haig, shown as the coldest of cold fish praying for victory 'before the Americans arrive'), mixed up with something still of that hazardous and vicarious nostalgia. To find a setting and a tone unsolemnly stylised and emotionally valid, a frame in which to set the soldiers' songs and the jokes, a film style which doesn't entirely lose sight of a theatrical context, is not a problem one would like to have been faced with. Richard Atten- borough, the writer Len Deighton (uncredited. but his contribution seems an exceptionally open secret) and the designer Don Ashton do startlingly well with Brighton Pier and the Sussex Downs, after a sticky start in which the film seems to be working its way into a convention that will hold up under it.

Among elegant, almost lacy white pillars, the politicians and heads of state gather -and the generals later dance—Richardson, Gielgud, Redgrave, Ian Holm's mournful Poincare, John Mills's Haig, Olivier's masterly French, a notable roster of tiny performances. Outside, there are donkeys on the sand and the feeling of the end of a long Bank Holiday. Generals man the turnstiles as the `Great War' sign flashes on in lights; daffodil-yellow girls, brandishing lacrosse sticks, sing 'Your King and Country Need You' in front of the back- cloth of Roedean; and Maggie Smith, the siren with a sudden harridan grimace, tempts her audience over the footlights and into the ser- geant's embrace. Trenches on the downs; the 1914 Christmas Truce re-created on the wAste land of the corporation rubbish dump: such homely locations carry their own pull of asso- ciation. And when the film goes back to the pier—Brother Bertie so innocently off to war on a toy train, white lights on the pier and

the flicker of red flares ominous on the water —the value of this ridiculous rococo symbol becomes unmistakable, enclosing fantastication in a tight little circle of ordinariness.

There are bumpy passages in transition or emphasis, and over-elaborate inventions like the French cavalrymen's death dance on a roundabout. Generally, though, the film is eased over them by that sympathetic tenacity which has been Richard Attenborough's style as an actor. He hangs on; he worries out solu- tions; if he sometimes gets them wrong, the errors aren't the flashy unforgivable ones. It sounds moderately awful, for instance, that soldiers about to die in a shell-hole should each be handed a premonitory poppy. But where the noisier symbolism of How I Won the War, in which dead soldiers turned acid- drop colours, lashed itself to stridency, here the tone hardly rises above a whisper.

Attenborough is actor enough not to be scared of leading his film theatrically over the top, as in the great front-line church service with its emotive parody hymn tunes. But at the end, after the Americans have burst into `Over There,' invading the pier and sending the staff huddling for shelter, and the cricket scoreboards have clicked up the final slaughter, he steers it to a hushed conclusion. The green Sussex Downs; the slow, sad parody of 'They'll Never Believe Me' on the sound-track; four little figures in white, whom we've just seen at picnic tea, corning down a slope through the sea of crosses; the camera moving slowly up, a cloud passing to change the colour of the day, and the white crosses stretching away to fill a landscape and a mental vision. It is a grave, audacious and overwhelming way to „end a picture: 'every metaphor, every thought a commonplace, emptiness everywhere, the whole magnificent.'

There is not a bad earthquake at the end of Mackenna's Gold (Odeon, Leicester Square, 'A') and it's typical of this sort of heavily inflationary Western that it is only at its best when chucking rocks around model landscapes. The story is the one about the stern, honest lawman (Gregory Peck) who is the only man to know the route to the Indians' secret golden valley; and the bold bad bandit (Omar Sharif) who won't let him live a minute after they get there. By the time Carl Foreman's script and J. Lee Thompson's direc- tion have finished with this simple tale, though, it is sagging and sprawling all over the land- scape. A posse of guest stars, headed by Ed- ward G. Robinson, turns up to make the rather trying point (after all, Mr. Foreman did write High Noon) that the respectable citizens are just as venal and conniving as the outlaws. At least the massacre of the guest stars gives ;,the Indians something to do to justify all those tetereophonically thundering hooves, as well as reducing the cast to manageable proportions. Bullets ricochet madly; the bandit keeps laughing immoderately, as screen bandits will; at one notably cockeyed moment the camera takes a header into a pool, where fully dressed Gregory Peck is primly fighting off a naked Indian squaw. Both the bandit and the lawman are still on their feet at the end; the prospect that they might be back for a sequel is not one to be contemplated lightly.