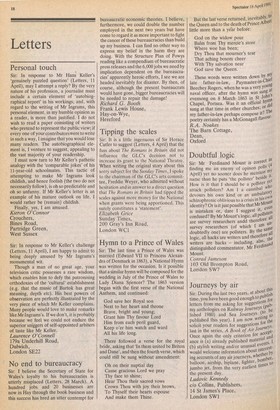 Hymn to a Prince of Wales

Sir: The last time a Prince of Wales was married (Edward VII to Princess Alexandra of Denmark in 1863), a National Hymn was written for the occasion. Is it possible that a similar hymn will be composed for the wedding in July of the Prince of Wales to Lady Diana Siiencer? The 1863 version began with the first verse of the National Anthem, and continued: God save her Royal son Next to her heart and throne Brave, bright and young; Grant him Thy favour Lord Him from each peril guard, Keep o'er him watch and ward All his life long.

There followed a verse for the royal bride, asking that 'In them united be Briton and Dane', and then the fourth verse, which could still be sung without amendment: Oh on their nuptial day Cause gracious Lord we pray Thy face to shine; Hear Thou their sacred vows Crown Thou with joy their brows, To Thyself their hearts espouse And make them Thine. But the last verse retSuperncetadto,r 8inleviAtparbill1y9,8tio the Queen and to the death of Prince Albert little more than a year before: God on the widow pour Balm from Thy mercie's store Where woe has been; Dry Thou that mourner's tear That aching bosom cheer With Thy salvation near God save the Queen.

These words were written down by TYL late father-in-law, Paymaster-in-Chiet Beechey Rogers, when he was a very Youll naval officer, after the hymn was sung 3,1 evensong on 8 March 1863 in St Johri s Chapel, Portsea. Was it an official hYtn.,11, sung at that time in other churches; or uit. my father-in-law perhaps compose it? The poetry certainly has a McGonagall flawni' R.A. Noakes