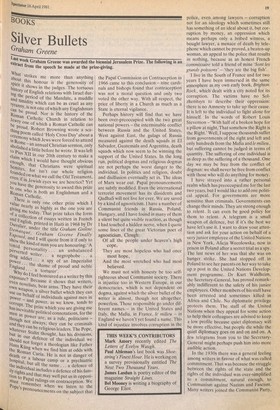 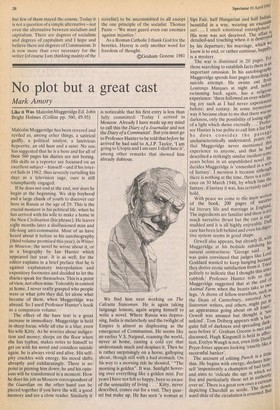 Last Week Graham Greene was awarded the biennial Jerusalem Prize. The following is an extract from the speech he made at the prize-giving.

What strikes me more than anything about this honour is the generosity of Spirit it shows in the judges. The tortuous history of English relations with Israel dur ing the period of the Mandate, a muddle and timidity which can be as cruel as any tyranny, is not one of which any Englishman can he proud. Nor is ihe history of the Roman Catholic Church in relation to be one of which a Roman Catholic can 0e proud. Robert Browning wrote a sca thing Poem called 'Holy Cross Day' about a ceremony y which Jews were forced to attend in 11°Ine — an annual Christian sernion, only abolished a little before he wrote. It was left tziP ius XII in our 20th century to make a m which I would have thought obvious enough, that Christians were spiritual emites, for isn't our whole religion founded on what we call the Old Testament, even if in Jewish eyes we are heretics? Yet You have the generosity to award this prize to one who is both an Englishman and a Roman Catholic. There is only one other prize which I value nearly as highly as the one you are giving Me today. That prize takes the form °f a collection of essays written in French a_hd English, printed in Haiti in 1968 byyr 12uvalier, under the title Graham Greene eni05que, Graham Greene Finally ,xPosed, and I will quote from it if only to s.i.low the kind of man you are honouring: 'A titnid Personality,., an unbalanced drug writer.., a negrophobe . a rug addict . .. a spy of an Imperialist Power.., the shame of proud and noble Enggland•. a torturer'. Why do I feel honoured as a writer by this exposure? Because it shows that writers, even novelists, bear arms. They have their ilvvn weapon, a silver bullet which they can use on behalf of individuals against men in PN'ver — and power, as we know, tends to c. orrupt. The prize which you are giving me has inevitablepolitical connotations, for the men in power are, as a rule, politicians — though not always; they can be criminals and they can be religious leaders. The Pope, but Stalin thought, has his divisions, nut in our defence of the individual we should not forget a theologian like Father Hans Karig when we find him at odds with the d tcoman Curia. He is not in danger of eath or a labour camp or a psychiatric hospital, but all the same . . . a defence of the individual includes a defence of his fam!!)' rights and that may well put us in opposi tion to Papal rulings on contraception. We must remember when we listen to the Pope's pronouncements on the subject that the Papal Commission on Contraception in 1966 came to this conclusion — nine cardinals and bishops found that contraception was not a moral question and only two voted the other way. With all respect, the price of liberty in a Church as much as a State is eternal vigilance.

Perhaps history will find that we have been over-preoccupied with the two great national powers — the interminable conflict between Russia and the United States, West against East, the gulags of Russia measured against the death squads in El Salvador, Guatemala and Argentina, death squads which now seem to be winning the support of the United States. In the long run, political dogmas and religious dogmas are not perhaps the worst danger to the individual. In politics and religion, doubt and disillusion eventually set in. The ideas of Marx wear out. Papal pronouncements are subtly modified. Even the international terrorist movement has its dissidents and Qadhafi will not live for ever. We are saved by a kind of agnosticism. I have a number of Communist friends in Russia, Poland, Hungary, and I have found in many of them a silent but quite visible reaction, as though I had touched a hidden nerve, when I quote some lines of the great Victorian poet of agnosticism, Clough: Of all the people under heaven's high cope, They are most hopeless who had once most hope, And the most wretched who had most believed.

We must not with honesty be too selfrighteous about Communist society. There is injustice too in Western Europe, in our democracies, which is not dependent on dogma, against which the silver bullet of the writer is almost, though not altogether, powerless. Those responsible go under different names — in the United States and Italy, the Mafia, in France, k milieu — in England we haven't yet found a name. This kind of injustice involves corruption in the police, even among lawyers — corruption not for an ideology which sometimes still has something of an ideal about it, but corruption by money, an oppression which means perhaps only a bribed witness, a bought lawyer, a menace of death by telephone which cannot be proved, a beaten-up woman, an appeal to the police that results in nothing, because as an honest French cornmissaire told a friend of mine 'Sow les grands poissons' — 'they are the big fish'.

I live in the South of France and for two years I have been immersed in the same atmosphere as my own early book, Brighton Rock, which dealt with a city noted for its corruption. The victims have no Solzhenitsyn to describe their oppression: there is no Amnesty to take up their cause. It is left to the individual to fight alone for himself. In the words of Robert Louis Stevenson — 'With half of a broken hope for a pillow at night, That somehow the Right is the Right.' Well, I suppose thousands suffer from governments of the right and left and only hundreds from the Mafia and le milieu, but suffering cannot be judged in terms of quantity. The suffering of one individual is as deep as the suffering of a thousand. One day we may be free from the conflict of dogmas: we shall never be free from conflict with those who will do anything for money.

I have strayed into a rather personal realm which has preoccupied me for the last two years, but I would like to add one political appeal. For governments are more sensitive than criminals. Governments can change their minds. They are strong enough to relent. It can even be good policy for them to relent. A telegram is a small weapon of defence, but if it's the best we have let's use it. I. want to draw your attention and ask for your action on behalf of a very junior employee of the United Nations in New York, Alicja Wecolowska, now in prison in Poland after a secret trial as a spy. The last news of her was that she was on hunger strike. She had stopped off in Poland to see her parents on her way to take up a post in the United Nations Development programme. Dr Kurt Waldheim, the Secretary-General, has proved remarkably indifferent to the safety of his junior employees. Other members of his staff have been arrested and sometimes killed in Africa and Chile. No diplomatic privilege protects them. The staff of the United Nations when they appeal for some action to help their colleagues are advised to keep a low profile because quiet diplomacy will be more effective, but people die while the quiet diplomacy goes on and on and on. A few telegrams from you to the SecretaryGeneral might perhaps push him into more audible action.

In the 1930s there was a general feeling among writers in favour of what was called commitment. That was because the struggle between the rights of the state and the rights of the individual was over-simplified to a commitment, natural enough, to Communism against Nazism and Fascism. Many writers joined the Communist Party, but few of them stayed the course. Today it is not a question of a simple alternative — not even the alternative between socialism and capitalism. There are degrees of socialism and degrees of capitalism and I hope and believe there are degrees of Communism. It is now more than ever necessary for the writer (of course Jam thinking mainly of the novelist) to be uncommitted to all except the one principle of the socialist Thomas Paine — 'We must guard even our enemies against injustice.'

As a Roman Catholic I thank God for the heretics. Heresy is only another word for freedom of thought.