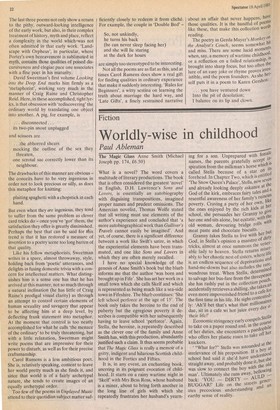 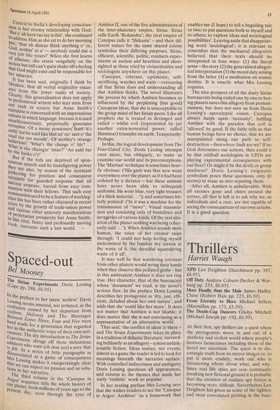 The Magic Glass Anne Smith (Michael Joseph pp. 174, £6.50) What is a novel? The word covers a multitude of literary productions. The book that is often considered the greatest 'novel' in English, D.H. Lawrence's Sons and Lovers, is essentially an autobiography with disguising transpositions, imagined proper names and prudent omissions. The Amercian novelist, Thomas Wolfe stated that all writing must use elements of the author's experience and concluded that 'a more autobiographical work than Gulliver's Travels cannot easily be imagined'. And yet, of course, there is a significant difference between a work like Swift's satire, in which the experiential elements have been transmuted, and one like Sons and Lovers in which they are often merely recalled.

I have no special knowledge of the genesis of Anne Smith's book but the blurb informs me that the author 'was born and brought up in Fife'. She has set her work in a small town which she calls Skelf and which is represented as being much like a sea-side town in Fifeshire. The blurb continues: 'She left school perforce at the age of 15'. The book only takes the heroine to the end of puberty but the egregious poverty it describes is compatible with her subsequently having to leave school 'perforce'. Again, Stella, the heroine, is repeatedly described as the clever one of the family and Anne Smith has, with this production, abundantly, justified such a claim. It thus seems probable that The Magic Glass is really a memoir of a gritty, indigent and hilarious Scottish childhood in the Forties and Fifties.

It is, in any event, an enchanting book, unerring in its poignant evocation of childhood. It starts on a rainy wartime night in 'Skelr with Mrs Bess Ross, whose husband is a miner, about to bring forth another in the long line of girls with which she repeatedly frustrates her husband's yearn ing for a son. LJn fen nam, the parents gratefully accept s'piration from the milkman's horse which is 'The Snow Queen's Palace', Stella, now seven es prepared with feule God, in Stella's opinion a maestro of dirty able lady to heaven. Stella returns rinse!' ably to her chaotic nest of sisters, where lire school, she persuades her Granny to gie her one and sits alone, but ecstatic, with hiL,' old woman, devouring bridge rolls wit" tricks, almost at once summons the venerpoverty. Craving a party of her own, like the ones enjoyed by the rich kids at her and already looking deeply askance at rhe resentful awareness of her family's ruinous called Stella because of a star on Its forehead. In Chapter Two, which is entitled God of the kirk, embraces fairy tales and a ing for a son. LJn fen nam, the parents gratefully accept s'piration from the milkman's horse which is 'The Snow Queen's Palace', Stella, now seven Granny takes Stella to live with her hat accidentally retrieves a shilling, she takes an even more impoverished friend to a cafe fOr the first time in his life. He sighs contented'. ly: `Ah'll bet that's what thae millionaires dae, sit in a cafe wi hot juice every day ° wondrous treat. When Stella, determine" to salvage her bus-fare from the threepence she has rashly put in the collection pouch, is an endless sequence of deprivations and hand-me-downs but also includes the rare; meat paste and chocolate biscuits. Granny takes Stella to live with her hat their life!' Economic stringency early compels Stella to take on a paper round and, in the cour,s.e of her duties, she encounters a paedophiler who offers her plastic roses to take off he knickers. "What for?" Stella was astounded at the irrelevance of his proposition. If a b°Y ad school had said it she'd hoe understoo straight away, and probably done it, but she. was slow to connect the boy with the old man'. Ultimately she runs away, bellowing back: 'YOU — DIRTY — AULD — BUGG AR!' Life on the streets genet': ates precocious understanding and an earthy sense of reality. • Central to Stella's developing consciousness is her stormy relationship with God: 'But a' ah have tae say is this', she continued to address Him as she sat to do her morning Pee, 'that ah dinnae think anything o' ye, God, nothin' at a' — anybody could dae a easy job like yours!' When she first learns of atheism, she seizes vengefully on the notion but still can't quite shake off a feeling that God might exist and be responsible for her miseries. It has been said, originally I think by Menken, that all verbal originality emanates from the lower ranks of society. Clearly, this generalisation does not apply to professional writers who may stem from any rank in society but Anne Smith's narrative is concerned with an impecunious culture in which language, because it is used unselfconsciously, perpetually generates metaphor. Of a messy pensioners' feast: 'it's awfif tae be auld like that an' no' sure o' the road tae yer mouth'. Of mother's strange behaviour: 'What's the change o' life?., What is she chaingin' intae?"An auld bat by the looks o't!' But if the rich arc deprived of spontaneous speech and its transfiguring power they are also by reason of the incessant iciekeYing for position and consequent necessity for guarded response that all success imposes, barred from easy corn With their fellows. That such easy communion used to be a feature of working Class life has been rather obscured in recent Years by the growth of trade-union power and various other unlovely manifestations 9f proletarian prosperity but Anne Smith, ,11.1 this vital, funny and profoundly moving pook, recreates such a lost world.