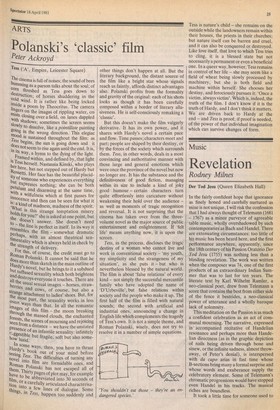 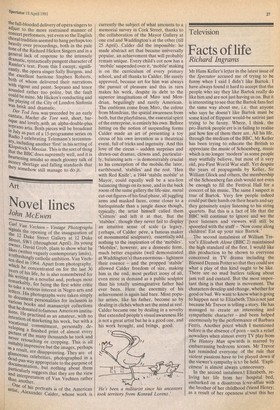 Der Tod Jesu (Queen Elizabeth Hall) In the fairly confident hope that ignorance as finely honed and carefully nurtured as mine is not unique, I will risk the confession that I had always thought of Telemann (1681 1767) as a minor purveyor of agreeable table music, wholly overshadowed by such contemporaries as Bach and Handel. There are extenuating circumstances: too little of his music has been heard here, and the first performance anywhere, apparently, since the 18th century of his Passion Oratorio Der Tod Jesu (1755) was nothing less than a blinding revelation. The work was written when the composer was 74, one of the first products of an extraordinary Indian Summer that was to last for ten years. The literate text by Karl Wilhelm Ramler, a neo-classical poet, drew from Telemann a score that contains the best from either side of the fence it bestrides, a neo-classical power of utterance and a wholly baroque lack of solemnity.

This meditation on the Passion is as much a confident celebration as an act of communal mourning. The narrative, expressed in accompanied recitative of Handelian resonance and perhaps more than Handelien directness (as in the graphic depiction of nails being driven through bone and sinew, or the infinite sadness, almost throwaway, of Peter's denial), is interspersed with da capo arias in fast time whose B-sections bring many a formal surprise and whose words and exuberance supply the celebratory element. Some of Telemann's chromatic progressions would have stopped even Handel in his tracks. The musical riches are boundless.

It took a little time for someone used to the full-blooded delivery of opera singers to adjust to the more restrained manner of concert performers, yet even so the English choral tradition seemed to hang perhaps too heavily over proceedings, both in the pale tone of the Richard Hickox Singers and in a general lack of response to the intensely dramatic, syntactically pungent character of Ramler's text. From this I except, significantly, the opera singer Sally Burgess, and the excellent baritone Stephen Roberts, both of whom delivered their narrations With vigour and point. Sopranb and tenor sounded rather too polite, but the fault could be mine. Mr Hickox's conducting and the Playing of the City of London Sinfonia was brisk and dramatic. Der Tod Jesu was .preceded by an early cantata, Machet die Tore weit, short, barNue and lovely ,with an alpha-double-plus s. oprano aria. Both pieces will be broadcast ifl July as part of a 15-programme series on Radio 3 celebrating Telemann's tercentenary, Including another 'first' in his setting of klopstock's Messias. This is the sort of thing that the BBC does supremely well, and it is heartening amidst so much gloomy talk of money shortage and falling standards that they somehow still manage to do