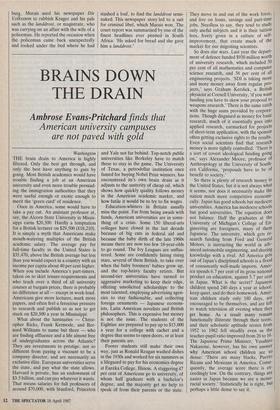 BRAINS DOWN THE DRAIN

Washington THE brain drain to America is highly filtered. Only the best get through, and only the best have anything to gain by going. Most British academics would have trouble finding a job at an American university and even more trouble persuad- ing the immigration authorities that they were useful enough or exotic enough to merit the 'green card' of residence.

Once in America, some would have to take a pay cut. An assistant professor at, say, the Alcorn State University in Missis- sippi earns $20,500. Hardly a temptation for a British lecturer on $29,500 (£18,210). It is simply a myth that Americans make mouth-watering multiples of the British academic salary. The average pay for full-time faculty in the United States is $35,470, above the British average but less than you would expect in a country with an income per capita about 40 per cent higher. When you include America's part-timers, taken on to skirt tenure-requirements and who teach over a third of all university courses at bargain prices, there is probably no difference at all — except in work-load. Americans give more lectures, mark more papers, and often feel a ferocious pressure to research and publish so as not to get stuck on $20,500 a year in Mississippi.

What about the luminaries — Christ- opher Ricks, Frank Kermode, and Ber- nard Williams to name but three — who are finding affluence and a life almost free of undergraduates across the Atlantic? They are investments in prestige, not so different from paying a viscount to be a company director, and are necessarily an exclusive elite. European universities serve the state, and pay what the state allows. Harvard is private, has an endowment of $3.5 billion, and can pay whatever it wants. That means salaries for full professors of around $70,000, with Stanford, Princeton and Yale not far behind. Top-notch public universities like Berkeley have to match these to stay in the game. The University of Texas, a petrodollar institution once famed for buying Nobel Prize winners, has encountered its's own brain drain as it adjusts to the austerity of cheap oil, which shows how quickly quality follows money in the American academic market, and how futile it would be to try to fix wages.

Education-whiners in Britain usually miss the point. Far from being awash with funds, American universities are in some- thing of a crisis. Some 150 liberal-arts colleges have closed in the last decade because of big cuts in federal aid and because the baby dirth of the late 1960s means there are now too few 18-year-olds to go round. The Ivy Leagues are unflus- tered. Some are confidently hiring rising stars, several of them British, to take over when the baby boomers' babies grow up, and the top-heavy faculty retires. But second-tier universities have turned to aggressive marketing to keep their edge, offering unsolicited scholarships to the most talented, employing advertising agen- cies to stay fashionable, and collecting foreign ornaments — Japanese econom- ists, Latin American novelists and British philosophers. This is expensive but money is not the issue. The students of the Eighties are prepared to pay up to $15,000 a year for a college with cachet and a degree that seems to open doors, or at least their parents are.

Poorer students still make their own way, just as Ronald Reagan washed dishes in the 1930s and worked for six summers as a lifeguard to pay for his economics degree at Eureka College, Illinois. A staggering 47 per cent of Americans go to university, of whom half graduate with a bachelor's degree, and the majority get no help to speak of from their parents or the state. They move in and out of the work force, and live on loans, savings and part-time jobs. Needless to say, they tend to study only useful subjects and it is their tuition fees, freely given in a culture of self- improvement, that create much of the market for our migrating scientists.

So does star wars. Last year the depart- ment of defence funded $930 million worth of university research, which included 50 per cent of all mathematics and computer science research, and 38 per cent of all engineering projects. 'SDI is taking more and more money away from regular pro- jects,' says Graham Kerslick, a British physicist at Cornell University, 'if you want funding you have to skew your proposal to weapons research.' There is the same catch with the huge sums provided by corpora- tions. Though disguised as money for basic research, much of it essentially goes into applied research, earmarked for projects of short-term application, with the sponsor often getting exclusive rights to the results. Even social scientists find that research money is more tightly controlled. 'There is a sort of covert ideological funding going on,' says Alexander Moore, professor of Anthropology at the University of South- ern California, 'proposals have to be of benefit to society.' So there is plenty of research money in the United States, but it is not always what it seems, nor does it necessarily make the nation much more competitive economi- cally. Japan has good schools but mediocre universities. America has mediocre schools but good universities. The equation does not balance. Half the graduates at the University of Michigan's College of En- gineering are foreigners, many of them Japanese. The university, which gets re- search funding from Ford and General Motors, is instructing the world in adv- anced automobile engineering, and sharing knowledge with a rival. All America gets out of Japan's disciplined schools is a flood of consistently well-made imports. Amer- ica spends 6.7 per cent of its gross national product on education, against 5.7 per cent in Japan. What is the secret? Japanese children spend 240 days a year at school, keep quiet, and do their homework. Amer- ican children study only 180 days, are encouraged to be themselves, and are left to watch television all evening when they get home. As a result many remain functionally illiterate through their teens, and their scholastic aptitude scores from 1952 to 1982 fell steadily even as the teacher-pupil ratio improved from 26 to 16. The Japanese Prime Minister, Yasuhiro Nakasone, however, has his own answer why American school children are so dense: 'There are many blacks, Puerto Ricans and Mexicans in America. Conse- quently, the average score there is ex- ceedingly low. On the contrary, things are easier in Japan because we are a mono- racial society.' Statistically he is right, but perhaps a little dense to say it.